Staff member
Does anyone have any information or photos they would be willing to share of the Russian 5th Alexandriyski Hussar Regt Busby? I believe (?) this is the only Russian Hussar Regt. to wear a Death's Head.

I am particularly interested in the skull as I wonder if some of these Russian skulls have been dismissed over the years as people thought they were copies of Leib-Husaren?

Unfortunately I cannot find that thread or the images. I did not even know a Russian Death's Head Busby existed until I saw it here on the Forum. I believe one of the Russian members here posted some images, perhaps Sergi1877? Any help would be appreciated. Tony 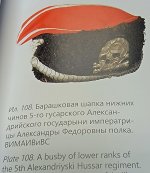 11.08.1776г. - Dalmatian Hussar Regiment was formed from Slavic hunting servicemen as a settled Hussar regiment, together with eight others, constituted the settled regiments of the cavalry of Catherine the Great and was intended to guard the Ukrainian line. Regimental colors of the horses were black. Their nickname was "black hussars", or "unfathomable. It was a part of the 5th Cavalry Division. Quarter: Samara (07.1914). 6 squadrons 4 squadrons from 01.1917. Awards: 1. St George Standard with the inscription: "For Excellence in the Turkish War of 1828" and "1776-1876. 2. Badges on the tunic for distinction at Katsbach with the inscription "For the distinction of August 14, 1813. (awarded on 15.09.1813). 3. 22 St. George trumpets with the inscription "Of the Alexandria Hussar Regiment, February 8, 1816. (For the battle of Brienn-le-Chateau the regiment was awarded 4.06.1826). 20.07.1914 - as a part of the division was sent to Warsaw. 28.07.1914 - arrived to Warsaw. 02. - 04.04.1915 - as a part of the division in the V-th Siberian AK of the 2nd Army occupied the positions on the left bank of the Bzura River in Poland. 04.- 05.1915 - was transferred to Lithuania as a part of the Division. Ser. 10.1915 - after the stabilization of the front, as a part of the division occupied positions on the river Western Dvina. 11.1915 - as a part of the division in the combined detachment of the 5th Army, occupied positions on the right bank of the Western Dvina. 01.1917 - two rifle squadrons were assigned to form the 5th Cavalry Rifle Regiment of the Division. 02. - 06.06.1917 - as part of the division near the villages of Kapostnya and Nadzin."-First historical source
Second historical source:
"5th Hussar Alexander Regiment
5th Hussar Alexander regiment.jpg


Officer badge of the 5th Hussar Regiment of Her Majesty the Lady Empress Alexandra Fedorovna.

Description of the silver officer breastplate of the 5th Hussar Regiment of Her Majesty the Lady Empress Alexandra Fedorovna: Black enamel Maltese cross with white rim and white hussar knots at the ends. A white skull over crossed bones is superimposed on the centre. Approved 1st October 1913.

1919 г. - It was revived in the All-Union Revolutionary Army. The squadron of the regiment in January. - March 1919 it was included into Reserve Cavalry Regiment and in the spring 1919 was included into Perekopsky detachment of the Crimean-Azov Army, and then was transferred to the Caucasus. The own regiment (6 squadrons) was formed on 1.07.1919 in Grozny (from Stavropolians - old cavalry soldiers, Nogais and Kalmyks) as a part of the North Caucasian Army. Took part in pacification of Chechnya. By October 1919 there were about 2,000 men. 2000 men, including 3 staff officers and 27 chiefs (on 5.10.1919 there were 861 sabers and 18 machine guns), by 5.03.1920 - about 400 men.2 In March we left Vladikavkaz for Georgia, from there on 11 April we moved to the Crimea. From 16.04.1920 the division was a part of the 1st Cavalry Regiment. Commanders: Col. Glebov (spring - October, 1919), Col. В. V. Domozhirov (October 1919 - April 1920). It was also reborn as the Samara Hussar Regiment on the Eastern Front. During the exile he was chief of the regimental group (Cavalry Division) in France - Col. S. A. Toporkov.
he words of the Black Hussars' hymn
Who have not known, have not seen

The feats of the cherished,

Who hasn't known, who hasn't heard

Of those immortal Hussars!

Pour it, drink it!

The spell is round!

If they kill you, forget it.

That's the way it is.


"The horses are snoring, not standing.

Not rusting, but burning.

The swordsmen, they're crooked.

Tony note the rosette, which was used in tschako and tschapka.I have seen similar rosettes on German firefighters helmets.The question is how many of them have been contemporarily mounted from Russian items?

Staff member
Wow! Thank you so much. I certainly got what I was after. Naprawiacz you clearly are very knowledgeable. I went from knowing nothing to seeing the lineage, and several excellent images of that very unique Deaths Head. Wow!

So to clarify, the 5th Regt wore the eagle badge prior to 1914 and only wore it from 1914 until the end of the Russian Revolution? That is a very short period.

Thank you Steve and Tony for your kind words,but I only translated the text from Russian sources into Polish,and then from Polish into English.Best regards
Wojtek

Staff member
It is the same with me. I have some knowledge in my head but it’s the references that are the key.

So your having the reference was immensely helpful. And thank you again. I imagine my chances of ever getting a Russian skull are slightly less than zero…..
Last edited: Aug 13, 2021

Wow - what an outstanding trove of information. And I wouldn't downplay the value of having the info and sharing your translation skills! Awesome stuff.

Wojtek, that was some achievement, bravo!!!
Best regards, Steve

Thank you Jeff and Steve for the kind words. Best regards.
Wojtek
G

Tony without Kaiser said:
So to clarify, the 5th Regt wore the eagle badge prior to 1914 and only wore it from 1914 until the end of the Russian Revolution?
Click to expand...

Gerard Gorokhoff in his "The Russian Imperial Cavalry" gives an introduction date of 5 March 1914.

Staff member
Thank you Glenn. My question was unclear like usual... I meant the 5th Regt wore the eagle badge prior to 1914 and only wore the Deaths Head from 1914 until the end of the Russian Revolution?

So the Deaths Head was worn only from 5 March 1914 until the Regt. was disbanded?

Once again, fantastic images of those unique Deaths Head thank you Naprawiaz.
G

Wow, what an impressive response. We already deal in the arcane and obscure, but on this forum a member had this information at hand. Bravo!