Staff member
We are fortunate to have a post with pictures here of the Walter Hartmann collection. In my first decade of collecting back in the 1980's I began to hear about this fabulous collection which was out in California. I have never seen pictures of helmets from it in all my subsequent years of collecting. We are fortunate that Steve Mc who actually met Hartmann was given a series of pictures which he just recently found again. Here is some background information (email) from Steve:
I think it will be great
I don't know if you have or ever seen the old Col. Rankin book on spiked helmets
but some of Walt's helmets were shown in that book
as I have said before I got my first helmet about 1970
Hartmann already had this well advanced collection

The reason you have never seen photos
is that he was a policeman and did not trust anyone .

Very few people ever got to see his collection
I was lucky because early in the game
I made friends with Dave Powers in Laguna Beach
Dave drove me over to meet Hartmann and see his collection
also I was fiends with Jarl Hartze of Stockholm , Sweden
so was another "intro " that I got

Hartmann came to my place some years ago with a camera
and lots of equipment . He took photo after photo with back drops
and the whole works
He was going to do a book on helmets , but it never got done

I gave him a place to stay here , let him ride with us to Cincy
to the old OVMS show at the Drawbridge Inn
then he rode back here
next day hopped a bus and went to Chicago to shoot

I saw Hartmann's collection 2 times
and he gave me the photos I am sending out
Walt took the photos, that's the story.

So here are the initial photos from the HArtmann collection that Steve emailed to me recently: 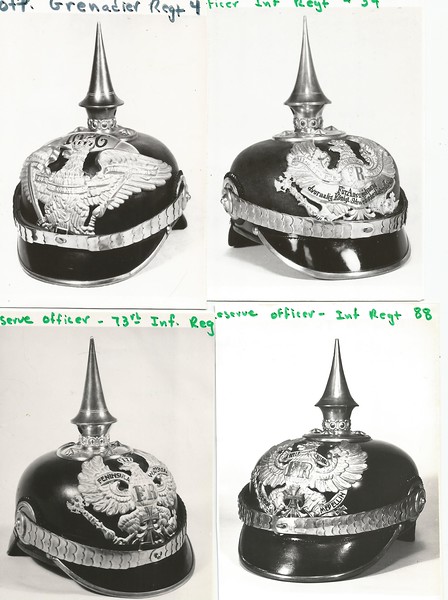 Staff member
Some additional pictures from this fabulous collection:

Is Mr . Hartman still with us ?
Click to expand...

No Mr Hartman passed away years ago.
9

Mr Hartmann was in the US army, stationed in Germany at and after the end of WWII. I was told he collected many of his helmets then. Someone who knew him very well told me the price he paid for the Garde Reiter officer helmet was a pack of cigarettes...

But early on Walt was in the Merchant Marines . He made many trips to Germany and was a very smart buyer .Even in the early 1970's
an enlisted Garde du Corps helmet with eagle top could be bought for $ 125.00 . R . T. just related a story to me about Walt . He learned of a meeting of veterans of the Braunschweig I R 92 .Walt attended the meeting , met some veterans and talked with them . He told the vets that he collected spikes helmets .One vet said I have something for you . The vet got to his attic and brought out a box
which was a gift to Walt .It was full of spiked helmets ! No better deal than that. I just ran across one more photo which I will send to Brain .I think he will want to post it also . A rare Hessian officers helmet .Good old memories .Great job of posting Brian ! Steve McFarland

911car ;
Yes , I was related that Garde Reiter helmet also .

Back in the early collecting years I bought an original oil painting on canvas , framed
of Kaiser Wilhelm II in his G d C uniform with helmet , signed and dated in the 1890's
for $ 125 Steve McFarland

Holy sh... It looks as if I'm just a novice in collecting now! Great collection!

I remember back in the 70s there being a GdC helmet for sale and the guy was asking $500 for it, everyone thought he was crazy.

Here are some more pictures of his fine collection that Steve shared with us.

I am very happy to say 2 of the helmets from Hartmann's collection are now in mine, and one is in my brothers. Had the great opportunity to buy them a few years ago.

Staff member
Obviously, it was a different time back when W. Hartmann got into collecting. It is a well known fact that there were 2 waves of helmets that hit North American shores from Europe. The first was directly from WW1 plus the War Bond helmets. The second, from WW2 vets who had an opportunity to liberate or buy hauben while stationed in post war Germany/Europe.

James ;
Thanks for adding some more of the photos of the Walter Eric Hartmann collection . I know that you got the Bavarian Uhlan officer .
Which one did your brother get ? I think that it is good now that own the helmet , that you now have a photo of it when it was in
Walt's collection .
Thanks
Steve

Staff member
One last photo sent to me by Steve, JR117 officer: 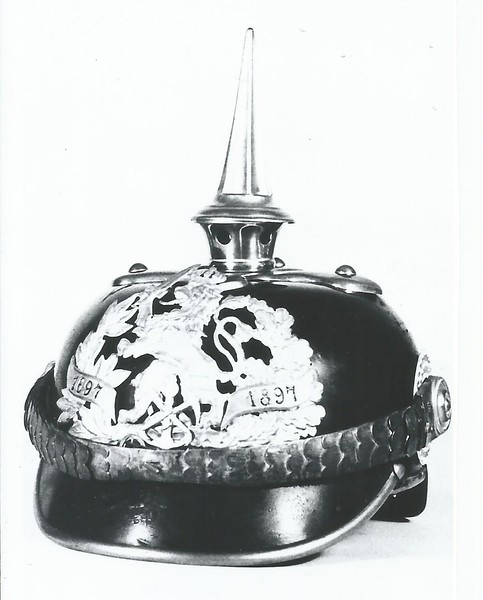 Only the 9th Kompanie wore the white metal crossed axe, pickaxe over anchor on their JR117 wappen.

Steve- Yes I got the very nice Bavarian Ulan and my brother got a nice Prussian Ulan.

James ;
Great ! It is nice for you to own a couple of helmets from that
great former collection of Walt Hartmann . It is the kind of stuff
that dreams are made of . Just think of me seeing that collection
when I first got started back in 1970 .I always wanted one of his
reserve Prussian Grenadier officers .I have all the Grenadiers ,
but none are reserve officers . They may have already come and gone .
Steve McFarland
O

Great to see these. I always enjoyed the beautiful photographs in the Rankin book, in fact I still do. When that book came out in 1965 it was the only game in town, at least in English. A tip of the hat to Walter Hartmann, Colonel Rankin, and Norm Flayderman.