Here are the King's Prizes displays
Infantry
and the few Artillery displayed with
the balance of the Kaiser Artillery Prizes .
Steve 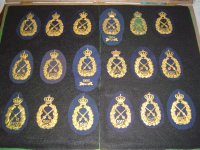 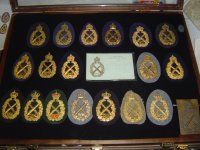 Jens; were you ever able to send photos from the OMM magazines? I would like a copy if you were able !
K

dick roback said:
Jens; were you ever able to send photos from the OMM magazines? I would like a copy if you were able !
Click to expand...

Dick, I send you a PM. Best regards, Jens

View attachment 11200
Prussian Artillery dated 1905 and 1906. The only unit to win an artillery Kaiser Prize in consecutive years was the 5th Battery of Artillery Regiment 4.

View attachment 11201
As previously indicated the last award of the prizes was 1913. Before the war interrupted, there were apparently plans for the competitions in 1914.
This 1914 dated prize was never issued.

When a company in one of the regiments for which William II was the honorary chief won a Kaiser prize the company was awarded this Kaiserschnur. A silver plaque was also placed in the officer casino and the company commander was given the Red Eagle order fourth class.
Click to expand...

Do you own the 1914 Jager Prize ? Thanks Steve McFarland

I have redone my Kaiser & King Prize display
so to show a couple of helmets front plates
as worn by Jager troops
Some of the Jager Prizes have the incorrect cloth backing .
and to display my small collection
of very rare Prussian and Saxon Machine Gun prizes 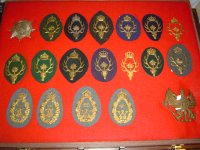 Jens; Got the down-loads! Thank you very much! Cheers Dick

dick roback said:
Steve; You are right, of the 26 that I have seen only about 3 had C.E. Juncker markings. Most of the backings are blank. Never have seen any other maker marks!
Click to expand...

Dick ;
Are you writing that you have 26 Kaiser prizes in your collection ?
Thanks
Steve
D

Steve: About 10 years ago I had 26 offered to me,but Unfortuneatly I did not have enough money to afford them!! I did purchase 6 of them, some were sold at SOS in 2013! Sure wish I had bought them all, but not enough money at the time. Still have a list of what was offered at the time, but no photos!!!

dick roback said:
Steve: About 10 years ago I had 26 offered to me,but Unfortuneatly I did not have enough money to afford them!! I did purchase 6 of them, some were sold at SOS in 2013! Sure wish I had bought them all, but not enough money at the time. Still have a list of what was offered at the time, but no photos!!!
Click to expand...

Dick ;
Thanks
Sometime why not post a photo of the 6 that you
did buy .I would love to see them
also if you have the time send a list of the 26
I would like to see what was there
Many thanks
Steve
D

Steve; Here are my Kings shooting prize badges. Only 1 does not have a metal backing plate.

Nice group
Thanks for the photo and the post.
Steve 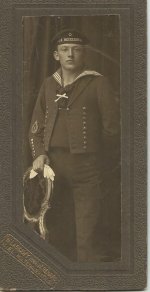 KAGGR#1 said:
Photo of a Naval man wearing a Naval Kaiser prize
The prize is mounted on the sleeve lower that I would have expected
He served aboard the Mecklenburg which means the Kaiser Prize must be for 1908
Now to find a Naval hat band for the Mecklenburg to go with the display
SteveView attachment 21510
Click to expand...

I wanted to add a few Naval hat bands to my photo and my Naval Kaiser Prizes .
I bought a Mecklenburg title on EBay but it has not yet arrived
Steve 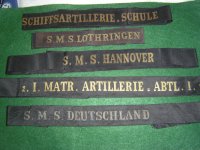 This is a great thread! Lots of great items and information!

Thought I would share a Kaiserliche Marine tunic I picked up last weekend with a Kaiserabzeichen originally sewn on. From what I read here and some other German references, I think it is a Marine issue Kaiserabzeichen.

Staff member
Wow! That is a great tunic with an excellent Kaiserabzeichen.

This guy really treasured his Kaiserabzeichen!

LangeKerl said:
A "Paul Meybauer, Berlin" marked example. If we can assume such based on only the backplate being marked. Unlike the "C.E. Juncker" marked examples.
Click to expand...