THE STORY BEHIND MY LATEST PICKELHAUBE

I find the history of an item fascinating, especially when it has a unit identification and the former owner’s name. In the case of this pickelhaube, it was in the inventory of the Train Battalion No 8, aka “Rheinisches Train-Bataillon Nr. 8”. Based on writing inside it, one learns that it became a Doughboys property during the AEF move into occupied Germany on 2 December 1918. 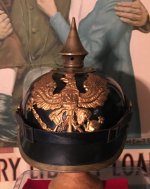 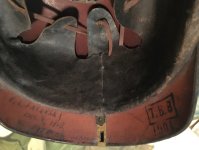 The pickelhaube, an M-1895 OR Prussian Pickelhaube, is in excellent condition. The rear visor left side has a rectangular stamp with the initials T. B. 8 with an additional stamp 1904; this signifies that the Prussian Army’s 8th Train Battalion had this helmet on its account in 1904. For a leather helmet that is 117 years old, except for mildew spots on the shell interior and the liner, the pickelhaube had seen little use. Written in ink on the right side of the rear visor helmet are three lines:

For me, this purchase was exciting because all this indicated that the pickelhaube was a trophy brought back by a doughboy sometime after the Armistice, most likely in the year 1919. So I used ancestry.com’s “U.S., Army Transport Service Arriving and Departing Passenger Lists, 1910-1939” search engine and put in the Name: E. L. FALEVSKY and the arrival date of 1919 Hoboken, New Jersey and found the following:

The 125th Infantry Regiment was a unit that was part of the 32D Division AEF, a National Guard Division during the First World War that was manned primarily with National Guard units from Michigan and Wisconsin. A quick check of period Division History and Welcome Home packet confirms that the elements of the 32D Division moved through Bitburg and that Bitburg is not far from Koblenz, Germany, where the Ehrenbreitstein Fortress and the home of the “Rheinisches Train-Bataillon Nr. 8” was stationed. 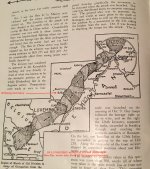 Here are some more pictures 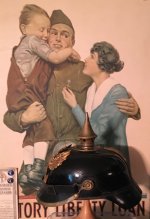 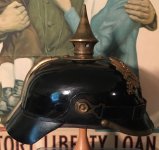 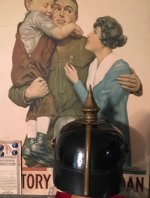 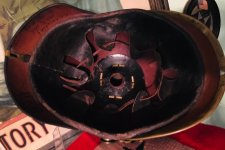 So, all the information validates what markings on the back visor of the pickelhaube. I hope everyone enjoyed the story of how this Prussian leather helmet found its way across the Atlantic.

Staff member
Excellent, great helmet and background story. I think all of us collectors love these rare occasions when we can track down some extra information on our helmets!

Well-rewarded investigation! Very interesting, but you did not say how the helmet made its way to you...
9

And perhaps a German soldier brought a US Train helmet home from Bitburg... 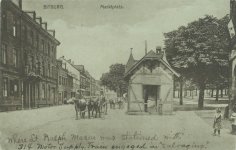 There's a TB 8 on Age of Kings at the moment too.

Congratulations, and well done on the research. Good to know it has found an appreciative home.

Let me just add that the original spelling of this surname is Falewski, derived from the noble state. The family lived near Grodno in former Poland, and now in Belarus. Great exhibit, congratulations.

Excellent helmet with a history.
Very nice to have that also with the helmet. I also have a TB8 helmet here, dated 1904. But it got transferred to IR29 later on.
Here the link to that topic.

Hello, my latest addition, a Prussian M95 that has been reissued a lot. Markings of TB8 (train batallion 8 ) 29R, BIA VII, 1904 and 1913, and II, zweite garnitur perhaps? And below the BIA marking a G, for garnisonsfähig? Still in nice condition though. Here some pictures of it. pictures for...
www.pickelhaubes.com

A very nice addition to your collection John!

Well done! That´s exactly this kind of research I particularly love!
Since a few years, I only collect this way: helmets with names that allowed to open a small window on the past! More, more, more!

the text was written in modern days

Very interesting and nice post. Congratulations to the helmet and to find the story behind it
J

Thank you one and all for your kind comments. Bruno is an excellent period picture of Bitburg Marktplatz. Anne, The Age of King’s website’s Train Battalion 8 dated 1908 Pickelhaube, is intriguing because it has a removable spike and convex brass chinscales. In comparison, my T.B. 8 dated 1904 pickelhaube does not have a removable spike and a leather chinstrap. These two OR Pickelhaubes show how pickelhaube’s from the same unit can sport different types of hardware.

Bruno’s question concerning the Pickelhaubes travels since arriving in the USA 102 years ago led me to do some research into the Post World War life of Edward Falevsky. Unfortunately, investigation often leads me to many different rabbit trails; therefore, my responses can be slow.

However, I believe it stayed in the family until recently. The story of Edward was relatively short and somewhat sad, which one often sees in any research into the past.
Shortly after returning home, Second Lieutenant, National Gaurd, Edward Falevsky, in the spring of 1919, resumed his life where it had left off when he enlisted.
After his 30 May 1919, Honorable Discharge, Edward Falevsky married Ruby Marie Curryer on 29 July 1919 in Pine, Minnesota. They most likely met after Edward Falevsky graduated from Wisconsin College when he worked as a general merchandising manager in Slayton, Minnesota, as indicated on his 1917 draft registration.
Edward Falevsky landed a job in his hometown of DePere, Wisconsin, as an auditor. In December 1922, Ruby gave birth to Carol Marguerite Falevsky. Unfortunately, Carol would pass in December 1923. Edward and Ruby’s second child Harlow Henry Falevsky was born on 8 December 1924. Eleven years later, Edward succumbed to complications after emergency surgery for an appendectomy on 7 November 1935 and was buried 10 November 1935 next to his daughter, Carol Marguerite’s grave in De Pere Greenwood Cemetery. Sadly, Ruby would join her husband and daughter three years later. Ruby and her mother, Bina Curryer, were killed in a car collision on 26 December 1938 outside of Lawrence, Wisconsin; Edward and Ruby’s son Harlow Henry Falevsky, now 14, and three others survived the crash with nonfatal injuries.
After recovering from the accident, Harlow Henry Falevsky lived with his uncle Joseph and aunt Margaret Curryer in Milwaukee, Wisconsin. According to his 1942 Draft Card, Harlow attended Marquette University in Milwaukee, and he gained entrance to the U.S. Navy Academy in June 1944. Graduating in the Class of 1947, he married Anne Emma Smith on 17 June 1947. After serving four years in the U.S. Navy, Harlow left the service in 1951. Using his Engineering Degree from the academy and experience gained in the service, he joined his brother-in-law, David Smith, in the family business, David Smith Steel Company, Staten Island, New York. Anne’s Grandfather, David Smith, founded the company on Staten Island, New York. Harlow and Anne had three children during their marriage, Edward, Carol, and Louise. So, one can presume that one of his children, most likely Edward placed Grandad’s War Souvenir Pickelhaube in the auction. The pickelhaube’s last move from the Long Island Auction House to my home in Tennessee ends the current chapter of this 117-year-old helmet.

Impressive search! You did great to trace the history of this helmet and his owner.

Regarding your comment above, do not be surprised. Train units were known to often adhere loosely to regulations. I have a textbook example of a Hessian Train helmet, untouched and perfectly marked, with a non-removable spike.
J

Bruno,
I’m glad you liked the post. I find your observations about other examples of train helmets interesting, it seems regardless of national militaries, support folks always pick and choose what they want. As one support pouge said “nothing is too good for the line doggies and that’s what we give them…nuttin!”
Thanks
John

great research and nice write up. Thanks for sharing
F