The Kettle Drummer of Uhlan Regt 13 . Only one kettle drummer per mounted unit .
So only 2 of the kettle drum covers are made for parade use . There were also 2 others made
for non parade use , which were less ornate .This photo is for Bob.
Steve 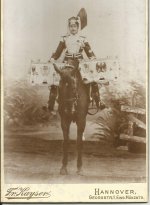 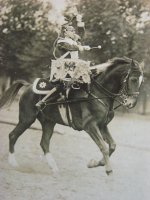 Neil ;
Do you own the original photo ?
Thanks
Steve

I love the photos, especially the drummer in gallop
B

Awesome photo Neil!! I love the details showing the reins attached to the stirrup.
N

That is a neat detail Bob. Several years back, I bought an assortment of 13U memorabilia out of Germany. I assume that it came from a family who were not really interested in the military history of a long gone relative. Included was a type written history of a battle (in German of course), two pair of metal epaulets, a couple of photos of the trooper, a shooting award, a couple of tin badges from a later reservist meeting and the subject photo. I have always assumed that the drummer photo was of the trooper to whom all of the other stuff belonged. Overall it was a great catch. I don't read German so I don't know what it involves. The title is: Schilderung eines Gefechtstages/ vom/5. Konigs-Ulanen-Regiment 13. Przesiadlow, 12.2.1915. Translation? I forgot to mention that the haul included a three volume set of books on the history of the 13.U Regiment.
Last edited: Apr 22, 2021
G

”Account of a day of battle from the 5th squadron, Königs-Ulanen-Regiment at Przesiadlow, 12 February 1915.”

Thanks Glenn. It is about 5 full pages, so asking someone to translate is not an option.

Neil ;
Thanks for the additional posts .
I sent you a P M
Steve

I found the names of the regimental kettle drummers at various years as follows:

Glenn ;
As always super information .
Thanks so much
Neil ;
Is your kettle drummer named ? Due to the fact that he wears " the new wide winged Garde eagle on his
helmet , I would say your man is Karl Schmidt .
Steve
You must log in or register to reply here.
Share:
Facebook Twitter Reddit Pinterest Tumblr WhatsApp Email Share Link
Top