Grouping of an Unteroffizier (Corporal) of the 63rd Regt of the 2nd Nassau Frankfurt aM. 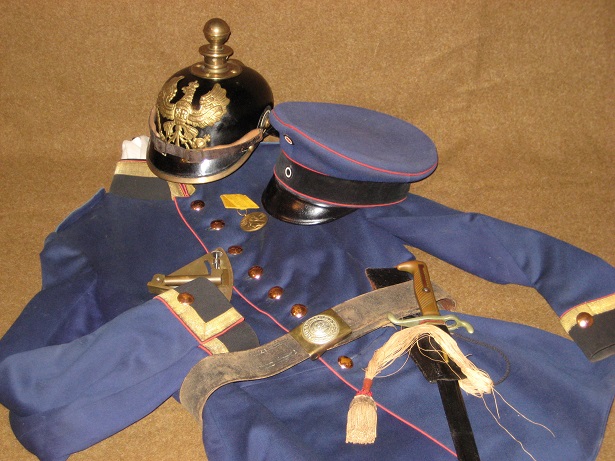 The tunic is Dunkelblau with tombac buttons and gold trim indicating rank. There are no collar discs on this uniform and it appears that there never were. I don't know the regulations behind collar discs, so maybe somebody can help me out. The epaulets are blue with a bomb and 63 in red.
The Pickelhaube is a standard issue M95 with a non-vented rear spine typical of the artillery.
The Schirmmutze is odd in this grouping in that it is a private purchase, officer quality mutze with velvet band, perhaps a later result of AKO 28 June 1873 which said that the issue kratzchen for enlisted was not suitable for NCO's and funds should be provided to purchase Schirmmutze.
Also pictured is a standard, rough side out, Prussian belt and brass buckle. The black is almost completely gone from this belt. I thought of dying it at one time, but opted for originality instead.
The bayonet is a model 1871 "dress" bayonet which were private purchase and had no slots for the bayonet lug and the spring is for decoration only. These were common from 1871 into WW1. The troddel has seen better days.
The instrument shown is a gunner's quadrant (original box not shown) for setting elevation on a 7.7cm Feldkannone and could also be used to set the "slide level" on the gun's sight mount.
This young Corporal was obviously transferred into this unit from another existing artillery regiment. Just to make this fun --- how can we tell?
Joerookery has posted a photo of an Artilleryman from the 10th Regiment on Flikr who is wearing this exact uniform except for unit and rank. With his kind permission I will post that photo for additional historic reference.

No problem John! Go for it and any member of this site or welcome to post my pictures for this kind of reference on the site without asking permission. We collect pointy helmets - don't mind sharing at all. Look at how generous serious collectors are in sharing photos of their helmets because of a small disability I don't get a chance to handle as many as I would like. But Bruno, Tony, Gunnar, Ron, Ed and Karel among others post pics all the time. If I can share a little bit with this discussion and it is useful I am very pleased to help. Use my pictures on this site with my blessings.

I noticed that the cockades are the regular enlisted type, but he had a Schirmmutze. At what rank would an NCO be allowed to ware all the trappings of his rank?

Thanks Joe!
Here is the photo attributed to an Artilleryman from the 19th Field Artillery (I mis-spoke earlier when I thought is was the 10th FAR). I cannot verify the unit, but he is definitely from the field artillery and not foot artillery. All of the foot artillery regiments had white epaulets. 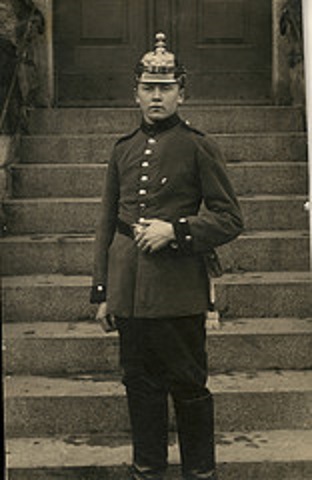 My understanding is that senior NCO's would/could wear the "NCO cockade" with a single ring. Colonel J has an excellent article on this in his website. Regardless, an Unteroffizier is a Corporal which is not a senior NCO. A senior NCO would be a First Sergeant, Master Sergeant, Master Gunnery Sergeant, and maybe a Gunny E-7. I also think that a Schirmmutze was not rank restricted and any soldier could wear one if he could afford to buy it. I have seen period photos with junior enlisted wearing Schirmmutzen, but I don't know if the regulations would allow this in formation.

I forgot to mention that I have a regular Mutze for this uniform, but I have continually questioned it. It seems that when I get "ripped off" it is always something made of cloth! I am going to post another thread in the forum when I get enough photos asking others what they think about the artillery Mutze pictured below.
John

SkipperJohn said:
The tunic is Dunkelblau with tombac buttons and gold trim indicating rank. There are no collar discs on this uniform and it appears that there never were. I don't know the regulations behind collar discs, so maybe somebody can help me out.
Click to expand...

25mm button on each side of the collar = Gefreiter (Cpl)

Same as above, but now a 16mm upper Feldwebel lace above the standard 21mm Unteroffizier lace, = Feldwebel, the highest NCO rank.

Doesn't that qualify you to run for president? :-k

Unfortunately I'm not qualified. I served in The US Marine Corps, my wife has never been pictured in a magazine, and I don't have any government secrets on my cell phone. That's okay, it seems the field was already full!
John
G

a very nice tunic. The belt would in fact be white and not black for FAR 63. As an Unteroffizier, he would have been entitled to wear the Prussian NCO pattern Faustriemen with leather strap and black and white tassles.

Glenn, Could you please provide the source of your information? Apparently I am completely off base with the belt. I thought that a white belt, often worn with a cavalry type buckle, was more for parade than it was a matter of rank. In the period photographs that I have seen, when a white belt is worn it is often with a parade plume, if the unit rated one. White belts were worn by privates through senior enlisted as near as I can tell. Officers wore brocade. Here's a photo of an artilleryman, private, with white belt, troddel, and sword. 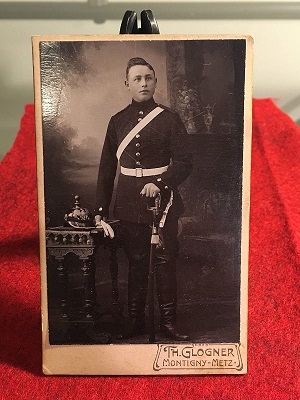 generally speaking all the Prussian field artillery wore white belts, both the foot and cavalry patterns depending on the whether the individual was serving in a fahrende or reitende detachment. The contingents from Baden, Grand-Ducal Hessen and Mecklenburg wore black leather equipment. This from the dress regulations of 1903:

As an after note: As a junior NCO in the field artillery, he would have been armed with an artillery sabre and the mounted troops pattern belt.

Thanks Glenn. Once again the search is on.

I finally found the proper belt for this uniform.
The belt is made of leather and is lacquered white. Some of the lacquer has been touched up --- probably in period.
The inside of the belt has blue felt attached.
The buckle is the standard 45mm Prussian belt buckle. 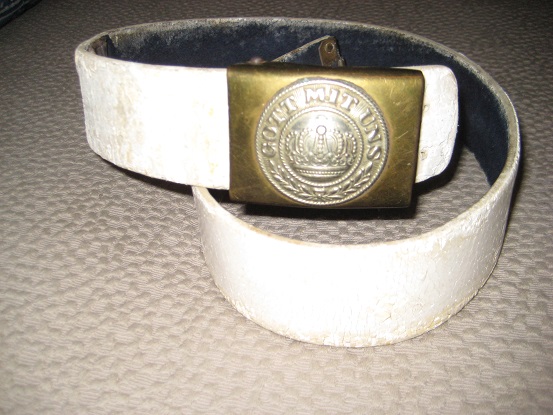 There is photographic evidence that both the standard belt buckle and the mounted troops belt buckle were used.
Tony has a photograph of an Unteroffizier, from an earlier period, wearing a standard buckle here: 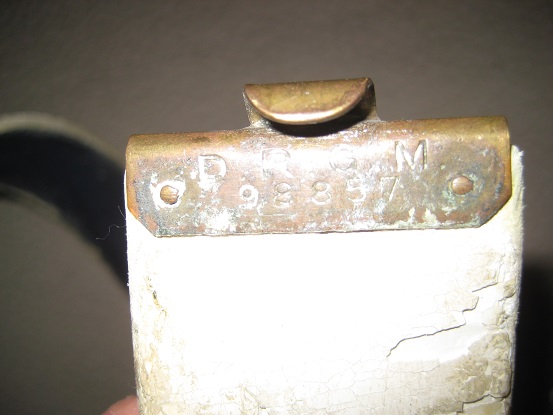 DRGM can be found on numerous items patented in Germany, from toys to jewelry.

I find it very interesting, since so many ranks and units wore these, that they are so incredibly hard to find!