Staff member
I have had this piece since my early collecting days in the 1980's. At that time, I had a dealer/friend who had connections with local Legions here in my part of Canada. This guy's modus operandi, was to offer to make Legions framed displays of CN WW2 militaria in return for any German WW1, WW2 they or their members might have. As part of this, he would hold the odd small militaria show at a Legion and on one occasion, he asked me for a display of pickelhauben. I had high hopes of making some contacts with civilians who might have grandads' old Haube from WW1, a typical collector fantasy. I never did score any hauben but at this particular show, I did notice a young guy walking around with a plastic grocery bag which obviously had something in it. I stopped him and made conversation so eventually I was shown what was in the bag....this item and a brass Prussian telegrapher buckle. I naturally bought both following the collector rule..."buy it now and buy everything" 8) I can't remember :-? (seniors moment) what I paid but it was definitely under $100CN for both. Unfortunately, the buckle had to be sold due to the divorce melt down 12 years ago. However, I still have this rather unique piece from the German trenches of WW1. I believe this to be Bavarian but I am ready to be corrected on that: 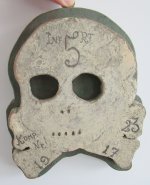 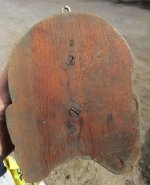 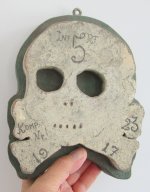 Feldgrau background and white skull, typical German Numbers and capital letters..Komp. The feldgrau was painted on last as there are splashes of it along the edge of the skull. Whoever made this, had some artistic/design skill. There are thousands of telegrapher buckles but this, is unique in my opinion. I was told at the time of purchase that this was found in an old house which was being torn down.