I've wanted a nice cavalry helmet for a while. I'm very happy with this one
from the 5th (the Princess Charlotte of Wales's) Regiment of Dragoon Guards.

regiment which became through diffirent almagations/mix:
in 1922: the 5th/6th Dragoons
then: the 5th Royal Inniskilling Dragoon Guards
and finally: The Royal Dragoon Guards

My Great Grandfather served with the Fifth Dragoon Guards for ten years. Served in India and then was in the Boer War and took part in the cavalry charge at the Battle of Elandslaagte. Very jealous of your helmet!

I have an original Helmet Plate, Cap Badge and one of his medals. I had to get a copy made of his second medal as they were split up amongst the family for some crazy reason and don't know where the other one went. Luckily I have copies of his service records so was able to know what bars to add to the Queen's South Africa medal. 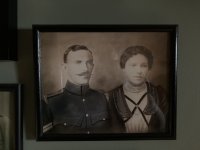 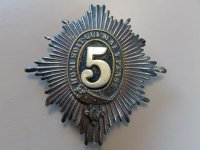 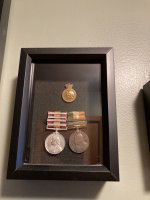 Thanks very much. He was quite a character.

I actually have two service records for him. The first one was when he ran away from home underage and joined up but was found out and sent home. I had thought that was just an interesting family story until I came across the two records and sure enough that was what was marked in the first one.

Excellent group with a family member background .
Nothing can be better
Steve