Does anyone have evidence of M1860 Reserve / Landwehr Prussian Eagle Wappen?

Staff member
Below is a M1860 Prussian eagle Wappen for Line Regiments. This is the standard issue pattern after 1860 with the Vaterland Bandeau as part of the stamping.

Can anyone show me a M1860 Reserve / Landwehr Prussian eagle Wappen? It would be the same eagle Wappen, but with silver Landwehr cross overlay instead of the Bandeau and FR.

Note the M1860 has three key features: vertical tail feathers, the area between the knees and wings is not cut out, and the arms (radius and humerus) when compared to an M1842 are reduced to a thin line with three 'balls'

An M1860 Reserve / Landwehr Prussian Eagle Wappen has eluded me and I would like to see one if it exists. Again, same basic eagle as below, but with silver Landwehr cross overlay. 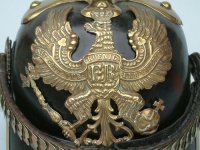 Something like this? I have this one in my inventory as an 1871 pattern.

Staff member
Thank you Steve, that is a nice M1871.

I am trying to find even a photo of an M1860/67 eagle Wappen with a Landwehr cross. I don't even l know if it exists. 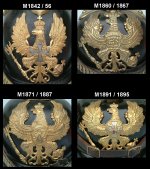 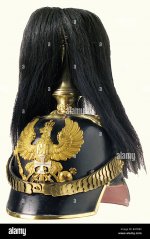 Source: www.alamy.com - Prussia helmet of 1860 pattern for reserve officers of the infantry

Staff member
Thank you Sandy. That helmet above is an M1860 with the more refined eagle M1867 Wappen, as that elegant shape eventually became the standard officer's eagle Wappen. It is also for a Reserve officer as the cross is on the tail.

The main reason I have not been able to find an M1860 Reserve / Landwehr Prussian eagle Wappen is that AKO 2.8.1860 directed that Landwehr would no longer use the spiked helmet, but instead wear a Tschako with the oval Landwehr Wappen. So based on that, technically, there would have been no need for a Landwehr M1860 eagle Wappen until they reverted back to the spiked helmet in 1881. But what about the Reserve?

Although the M1860 issue pattern Reserve / Landwehr still eludes me, I noticed that Tony V's avatar of a few of his helmets, has an M1856 with what appeared to be an M1860 eagle Wappen. Tony V. kindly allowed me to use his image, and here it is. As you can see it is the identical pattern to an issued M1860 but clearly a private purchase as the gap between the wings is cut out (as is proper for an officer’s helmet). This cut out did not appear on issued helmets until the M1891.

But the crown is not cut out. 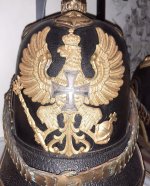 Then I found a thread where member krb450 was selling a rather remarkable M1856 Grenadier Regt. Nr. 9, and that helmet has an M1860 pattern Grenadier Private Purchase, (as is proper for an officer’s helmet) but this one has the crown cut out, and the gap between wings and knees not cut out. The opposite of Tony V's example. Not Reserve, but absolutely an M1860 eagle. While we are here, does anyone know what book that is? 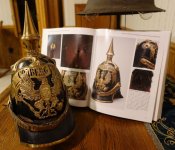 At least after much searching references and hundreds of Cdv (again) I am starting to see better the evolution of the Prussian Officer Wappen, and that it was indeed manufactured in the same pattern as the issued M1860. So that's progress.

However, still no evidence of an issued M1860 with a Landwehr cross for the soldiers of the Reserve. I am convinced they are out there, I just have never seen one.
Last edited: Dec 30, 2021

Hi Tony,
The book is "The German Infantry from 1871 to 1914 - Uniform and equipment (Volume 1) by Ulrich Herr and Jens Nguyen. Verlag Militaria.
Zeb

Staff member
Wow. That lives on my desk with the other volumes. That’s embarrassing. I did not recognize it. That is hilarious!
Last edited: Jan 1, 2022
G

just to clear up the matter of reserve officers before the introduction of the M67 model, I would add the following: The institution of reserve officers at that time did not exist! In fact, I did a bit of research into this particular issue some time ago and it can be summarized as follows:

The Decree concerning the terms of service of non active officers dated 4 July 1868 provided for the classification of the former Landwehr officers into both Reserve and Landwehr officers. The first promotions of newly commissioned Vice-Wachtmeistern to Seconde-Lieutenant der Reserve occurred on 3 September 1868 and the first conversions from Landwehr to Reserve status followed on 10 September 1868. The conversions from Landwehr to Reserve commissions continued throughout the remainder of 1868 and the first half of 1869.

Staff member
Thank you Glenn. This topic seems to blend in with this topic regarding Older Helmets with updated Eagle Wappen 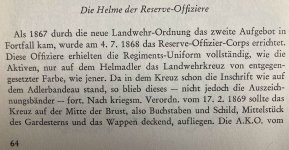 The helmets of the Reserve Officers

“The Reserve Officer Corps was established on July 4, 1868. These officers received the regimental uniform in full, like the active ones, only on the helmet eagle the Landwehr cross of the opposite color is worn. Since the inscription is already in the cross as on the eagle Bandeau, the Bandeau was not used. After wartime Ordinance dated February 17, 1869, the cross should lie on the center of the chest, so letters and shield, and the center piece of the guard star and the coat of arms cover, lie on top.”

Based on this, 1869 was the first time that a Landwehr cross was put on a Reserve officer. This suggests that any officer helmets with Landwehr cross 1842 to 1860 are Landwehr Officer. Not Reserve.

That evidence appears to clear up the use of the Landwehr cross on officer helmets like M1842 etc. Thank you again Glenn for your assistance with the 1869 Uniformirungsliste. I will use those images together with the translations here when I compile the research. It appears I answered my own question regarding the 'never seen' issued M1860 eagle with Landwehr cross.
Last edited: Wednesday at 9:27 PM
You must log in or register to reply here.
Share:
Facebook Twitter Reddit Pinterest Tumblr WhatsApp Email Share Link
Top