I will always be frustrated that my wife Gael and were only weeks from meeting Karel and Marina in Belgium. Now it is too late.

Karel told me many times his favourite Pickelhaube was his Leib-Husaren Pelzmütze. In his honour, I will post his Pelzmütze and then mine. It frustrates me very much that I never had an opportunity to show my example to him, in a tragic twist of Irony I was waiting to reveal it to him as a surprise, but foolishly waited to long.

Karel liked American bourbon as do I, so tonight I will raise a glass and toast to his memory, wherever he is. I will never forget him. 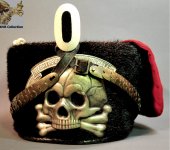 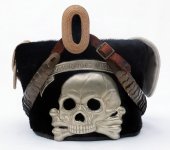 Cannot believe it has been a year already! He is missed.

So sad. Thank you Tony! I had the honor to meet Karel and see his collection. Met him again in Halen in August 2014.

The one thing that will alway be a remembrence to karel is the next story
There was a militaryfair on the airfield of ursel i was wandering about and in the corner of my eyes i saw a helmet (garde landwehr )with parade plume , its carying case ,a frame of the soldier wearing the helmet and a pair of shoulder boards all belonging t o the same person . I got up to the stand and asked the seller for the price .at that time i did not collect that kinda pieces so i did not know if the price whas right or not , so i needed some time to think about it .that same day my fathers brother was going to be buried so i had to leave the fair early to atend the funeral in the late afternoon i went back to the fair and noticed that the helmet was gone . It was a shame that i did not take it . So after a few moths i sawkarel at the fair in ciney and he invited me to his home to see his collection . Once i got there we went up to his mancave and to my biggest surprice that entire lot of helmet ,case ,frame ,schouldersboards was in the collection of karel . From then on everytime we met on a fair he made a joke to me that i could not think to long on a potential purchase or he would fetch it right from under my nose