The leather liner with squared fingers was worn until 1880, then they changed to the more comfotable silk/cloth liners...

The leather liner with squared fingers was worn until 1880, then the changed to the more comfotable silk/cloth liners...
Click to expand...

I am not so sure this date is accurate. Certainly that is the date that is used in conventional wisdom however, the leather liner was available at different retailers all the way up to the war. It seems as though the leather one was less expensive. And I agree that the cloth ones were more comfortable. But I do not think it was a sharp date of change. Rather I think it happened over time and still not completely. With more than one helmet in the closet it seems as though one of those would be top floor and the other somewhat more service-oriented.

Maybe I should have written that the silk/cloth liners were available from 1880 on. I agree there's no exact date and it must have been with a certain tansition time or so...

Adler and Joe,
Thank you very much for your help. I had thought that it wasn't until 1900. This info will help me a lot.
Jim

Staff member
Great posts on this thread gentlemen, thank you all again, for your contributions! I am unaware of anywhere else in the world where such comparisons and information exists.

A few months late to the party but there are some beautiful helmets posted here !!!!!!

Thank you all for sharing. 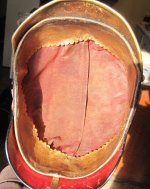 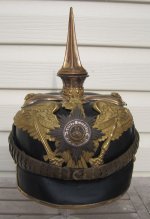 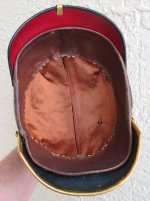 An example of the Satin Officer liner. 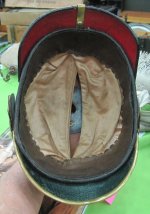 Another Satin example from a Mecklenburg Helme. 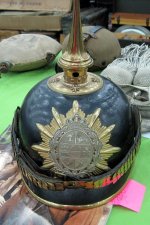 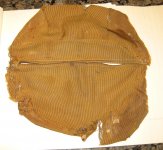 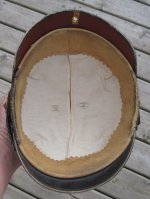 A near pristine example of a Garde officer liner. Usually these are soiled from use especially if the officer used a hair cream to slick down his hair. The small separations are typical of this ribbed silk cloth. In the worst cases the silk disintegrates into a spaghetti like state! 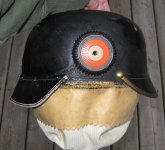 The above liner pulled down and out of the mid war Garde shell. Note the small tack stitches and surprisingly the use of an M91 officer kokarde filled in by the cardboard backing. This Garde helmet is from my collection and was brought back by a CN medical officer. It has a pe war wappen and spike but all other fittings are zinc.

Staff member
This is one of the most pristine officer liners I have seen, manufactured by AWES one of Germany's top makers....like new! The liner belongs to a Prussian field artillery officer helmet that has been sent for some restoration. Unfortunately, the condition of the outside of the helmet does not match what we see here. Most times, we only see the remains of that AWES trade mark. 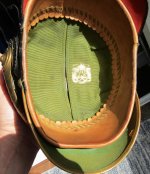 I love these ribboned sweat bands, very much "top of the line". 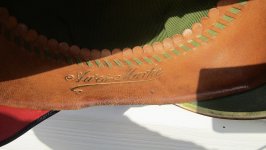 Gold embossed. The company even marked the underside of their officer spike bases! 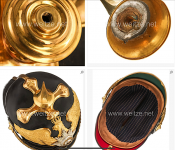 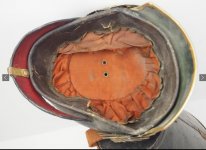 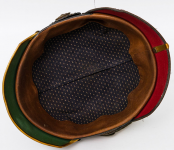 Staff member
Thanks for the new photos Sandy, I have seen that second one twice before on helmets I have worked on. It is very different than most, quite stiff and almost feels like nylon. The first one I have never seen before on a pickelhaube It reminds me of a French kepi liner somehow.

b.loree said:
Thanks for the new photos Sandy, I have seen that second one twice before on helmets I have worked on. It is very different than most, quite stiff and almost feels like nylon. The first one I have never seen before on a pickelhaube It reminds me of a French kepi liner somehow.
Click to expand...