Just in yesterday a Rare single shoulder strap for Saxon Field Artillery Regt 28. The strap still retains
the Russian cypher .Before the cypher was awarded to the regiment it wore the # 28 . The cypher was awarded late
and worn only until the war started with Russia . At that time the regiment went back to wearing the # 28 again .
After the pre war Saxon straps with the square tops for enlisted men the straps took on a new look with the pointed ends
for Feldgrau and even the Friedensrock straps .
Steve 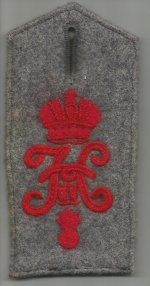 Staff member
Very nice, any idea what year they were awarded the cypher? I had no idea the Saxons dropped the square ends for the feldgrau uniforms

Brian ;
I will look it up .I am sure that that info is in Mike Kelso's book on I G shoulder straps
From memory I think it was sometime in 1914 .What is hard to find is the pre war enlisted
green strap with the Russian cypher FAR 28 .I know of only 3 examples in this country
I have the officers examples .I just put these on the scanner to show the cyphers and the Russian crowns .
The strap on the left has red underlay .The one on the right has white underlay .Note the difference in the crowns
for the same regiment. 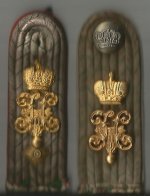 Staff member
Brian there’s no such thing as a squared Feldgrau strap. The entire confederation adopted the M1907 slip on Feldgrau strap with pointed end. 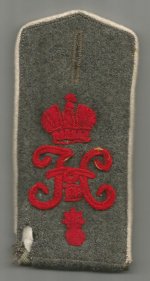 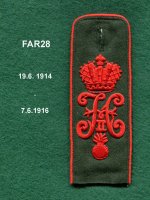 Tony ;
Excellent and very rare shoulder strap .
Thanks for posting the photo.
Steve

I can do that.

Schirmmütze (I love any example with a leather visor) https://www.kaisersbunker.com/dunkelblau/headgear/dbch39.htm 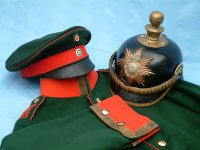