The Kokarde, credited to the French, was used by several of the 39 independent German speaking states prior to 1808. Bavaria began using a white-blue-white Kokarde in 1806. Bavaria fought for the French, so their decision to adopt the Kokarde made sense. The Kokarde was not adopted by Prussia until 23 October 1808 and it initially had nothing to do with rank. The Portapee and the epaulet distinguished the officer ranks, not the Kokarde. The Portapee was the only officer designation until 1806. The epaulet was adopted at a later date. The Kokarde was a symbol for national unity and national pride. Prussian Kokarden were black-white-black since their inception, but the style was varied and largely based upon the Regimental Commander's desires. The Kokarde was primarily used only by the military at this time and it took time to phase it in between all units. The infantry, Jagers, and Landwehr still used a Feldzeichen on their bell top shakos. All Kokardes were silk. Wool was not adopted for the Kokarde until 1813 and was phased in between 1813 and 1816, primarily to save money. Officer Kokarden were the same as enlisted; however, sometimes officers would have silver thread sewn into the white area. The Prussian Kokarde was standardized by Friedrich Wilhelm III on 22 February 1813 (one month before declaring war on France in the War of Liberation) and was mandated to be worn by all men 20 years old and older, military and civilian. It was to be worn on their hats. Women were not allowed to wear the Kokarde. Anyone refusing military service or showed "cowardice before the enemy" was denied the right to wear the Kokarde. Reaction to this order was said to be "extremely enthusiastic".

This is the first Prussian Kokarde, made of silk, and mounted on the left side of a Model 1809 Prussian Kürassier helmet: 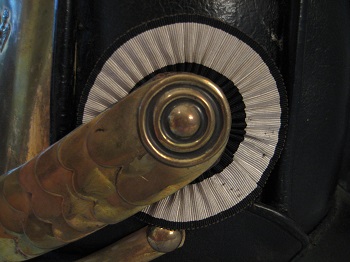 The 75mm Kokarde is made of silk and is colored in standard Prussian colors, black-white-black. Silk is a highly resilient material which can last hundreds of years unless it had been weighted. In the 1840’s manufacturers began weighting silk with sugars and metallic salts to increase profits. It was perfectly legal but the silk material was weakened by it. Weighted silks can dry out, shred, and they do not hold dyes well. Weighted silks also have a tendency to glow under black light, raw silks do not. This Kokarde does not glow under black light.

In 1842 the Prussian Kokarde changed from silk to leather. The Kokarde was 75mm for both enlisted and officers. The officers Kokarde adopted a silver metal ring.

In 1846 the officers Kokarde shifted back to silk and enlisted Kokarden were, once again, wool. The enlisted wool Kokarde remained in service until 1857.

This is a Prussian wool Kokarde from a Model 1857/60 Fusilier helmet. It is made of thick, stiffened wool felt (similar to what would be seen on a felt ersatz helmet), painted black with a white ring: 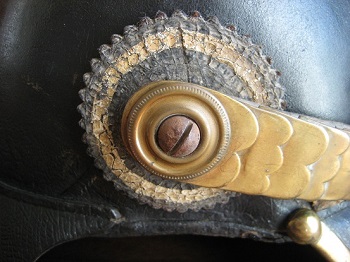 In 1857 a 75mm stamped Kokarde was adopted. This Kokarde was made of ferrous metal and used on Model 1857 and 1860 helmets. This one is on a Model 1860 Fussartillerie helmet: 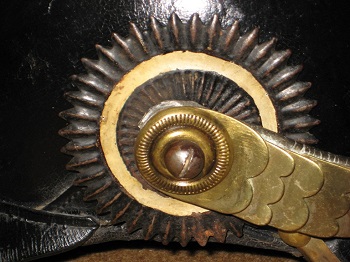 In 1867 the Kokarde for officers was reduced in size to 55mm and had a diagonal ribbed, single, silver ring attached. This Kokarde would eventually become known as the NCO Kokarde, though I am not certain that this was ever an official designation: 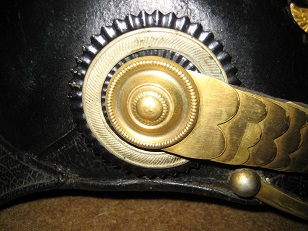 The enlisted Kokarde was also reduced in size in 1857 to 51mm. It was still stamped metal and retained the white ring. Variations exist showing thicker, or thinner, white rings: 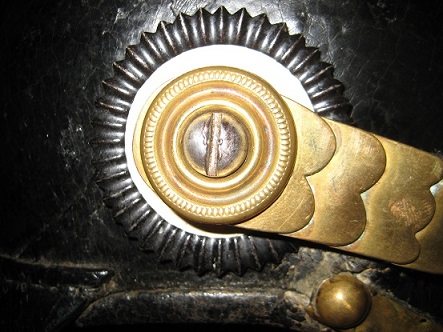 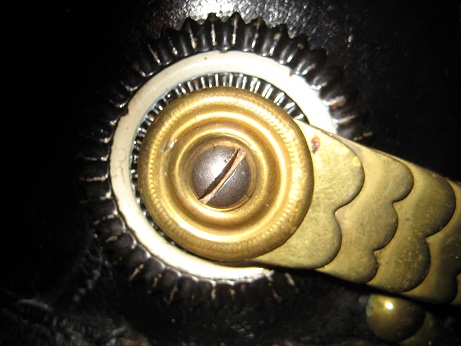 In 1871 the officers Kokarde adopted a twin ring. This may have occurred earlier, but it definitely happened between 1867 and 1871: 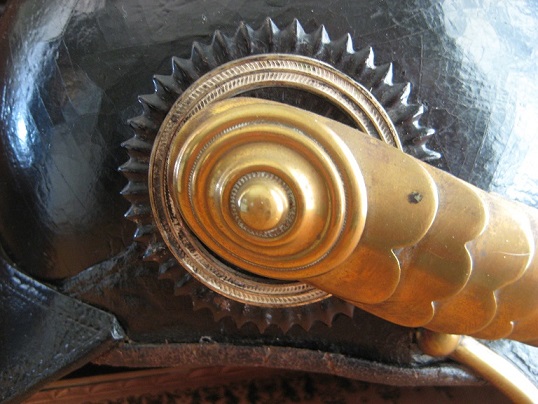 In 1891 the enlisted Kokarde was made to fit the "new" M91 lug by enlarging the center hole. In 1897 the size was reduced to 48mm. Hundreds of manufacturers stamped out millions of these between 1897 and 1915. Many variations exist with thick rings, thin rings, high detail, poor detail, convex, and flat: 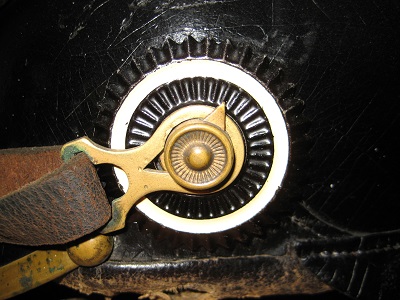 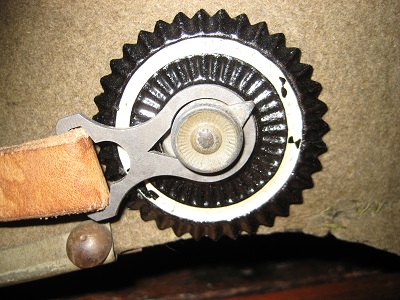 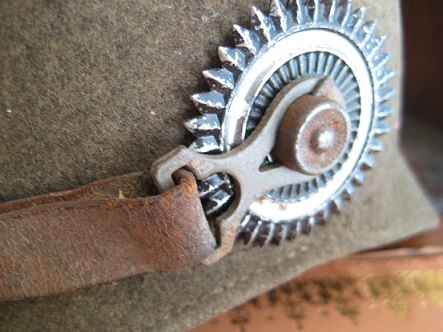 The Prussian Cavalry went through similar Kokarde changes. Kürassier Kokarden changed from 75mm silk and wool as mentioned above, to stamped metal Kokarden. The enlisted Kokarde was reduced in size to 73mm in 1857 and further reduced in size to 63mm in 1864. This is a Kokarde from a Model 1853/60 Kürassier helmet. This Kokarde measures 68mm; exactly half way between the 73mm and 63mm: 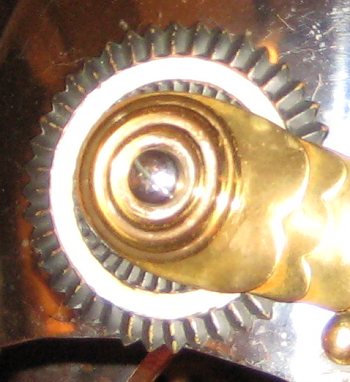 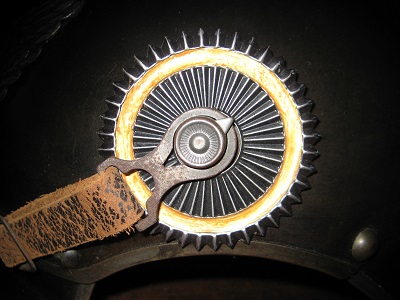 Photographic evidence exists showing that 48mm Kokarden were also used on Jäger zu Pferde helmets. I generally do not argue with period photographs. Here is an example of a 48mm Kokarde on a JzP helmet: 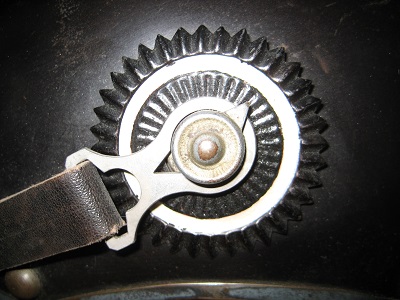 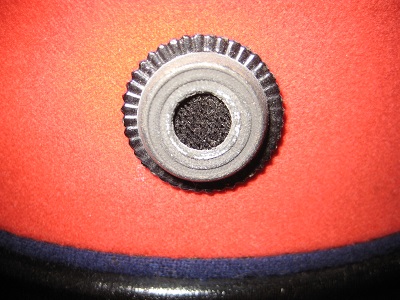 The enlisted Kokarde came in two basic versions. One was privately purchased and varied in size from 17mm to 20mm: 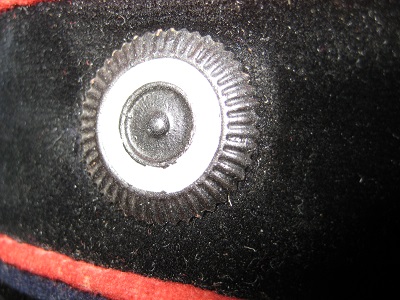 The other was an issued, sew on, type which measured 25mm: 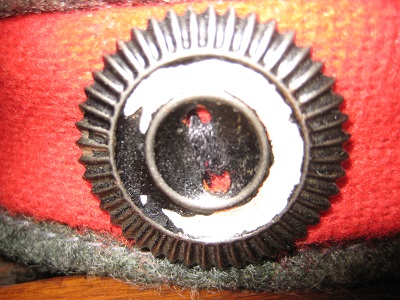 There is quite a lot of history behind those little pieces of stamped steel that we are constantly looking for to complete that Pickelhaube we just acquired!

A subject worthy of a book in its own right, and you have done it proud. Thanks a lot John.
Steve

Thank you for your valuable information! You write interesting things.
Wojtek

Great post, thank you very much for your efforts

Staff member
Excellent John as always. I know how much work an essay like that is.

What I wouldn't do do have a Preußen pre 1857 wool Kokarde. But sadly it has eluded me.

Staff member
Thank you John for all your research, text and photos in creating this excellent post. This will provide definitive information on the Prussian kokarde for years to come. We are very lucky to have you here on the forum. Well done!
Last edited: Jun 2, 2021

Great stuff John, thanks for sharing!

Thank you for your kind comments.
It's a labor of love.

Great stuff guy's, I want to add a rare variant similar to Saxon, v-notch cutouts for Reich and Prussian.

Here is another older type on my M1842 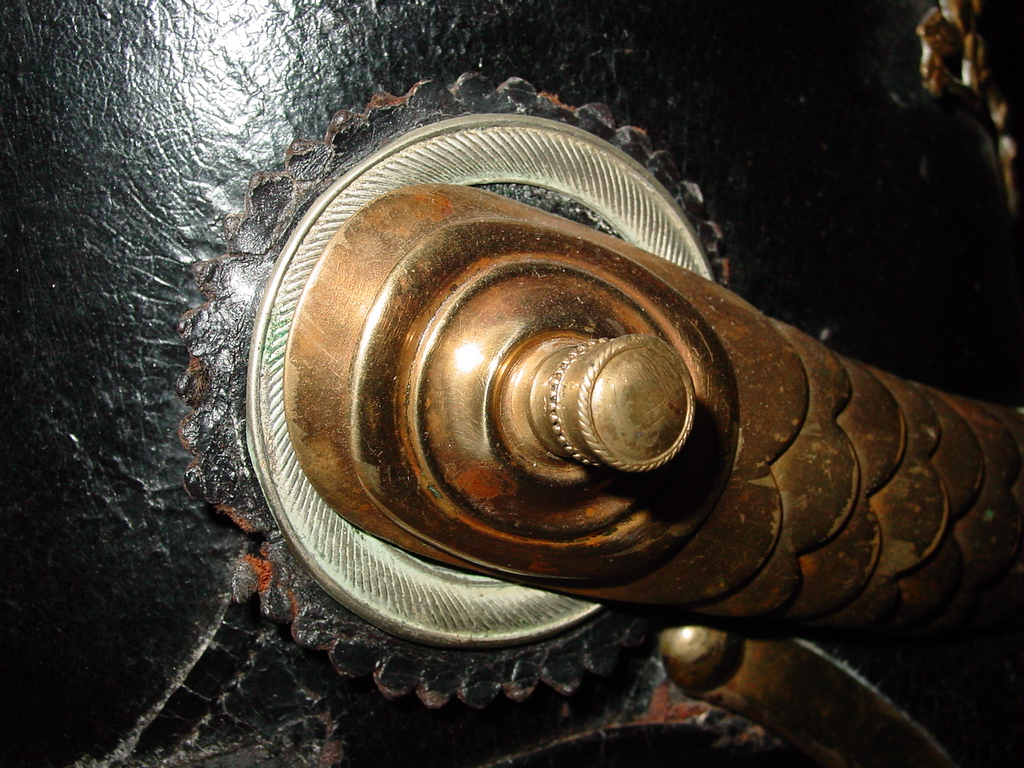 And here is a weird one, a standard Prussian OR Kokarden on some kind of French Probe card.

Staff member
It seems from this card James, that the French War Ministry was collecting examples of “German Equipment”.
J

John, Thank you for the history of the Prussian Kokarde/Cockade. It is fascinating how it evolved over the years. I especially laugh about the "manufacturers began weighting silk with sugars and metallic salts to increase profits" by making a product that requires replacement. James, your examples of the v-notch cutouts for Reich and Prussian Kokarden/Cockades were an excellent addition to this thread. The older leather and metal ring helps in knowing what is period correct. As we all know, there are folks out there always looking at a way to make a quick buck, pound, euro, etc., at a collector's expense. Thanks to one and all for your observations and input to this incredible thread.
John
9

Excellent tutorial, John.
Here is one of the rarest: the "alte Hessische" (old Hessian) cockade, only found on the 1st Kurassier Regiment officer helmet. 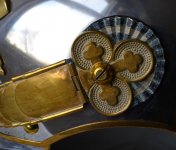 Same style of course for the Reich cockade: 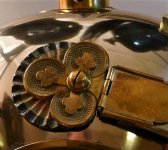 Along with the specialized Kokarden for officers, the 1st Kürassier Regiment adopted a special "Pro Gloria et Patria" Wappen in 1902, and the officer's wore specialized chin scales on their helmets. 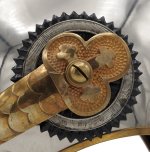 Here is one I have had for decades, came to me loose and have never seen another, not sure what it would go on?

40 mm about size of 1/2 dollar coin. the opening would fit on any standard M91 side posts, but Kokarden is much smaller then normal?

Here's another early Prussian leather Kokarde with a metal ring: 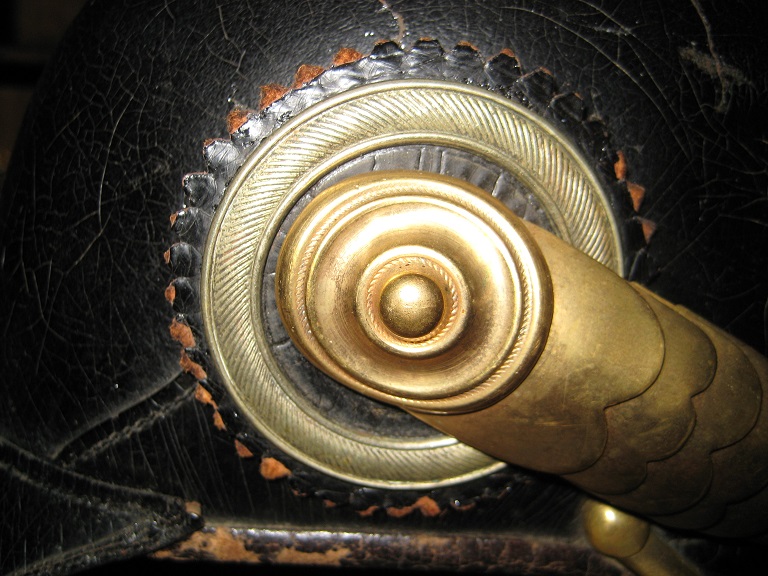 The leather is very thin on this one: 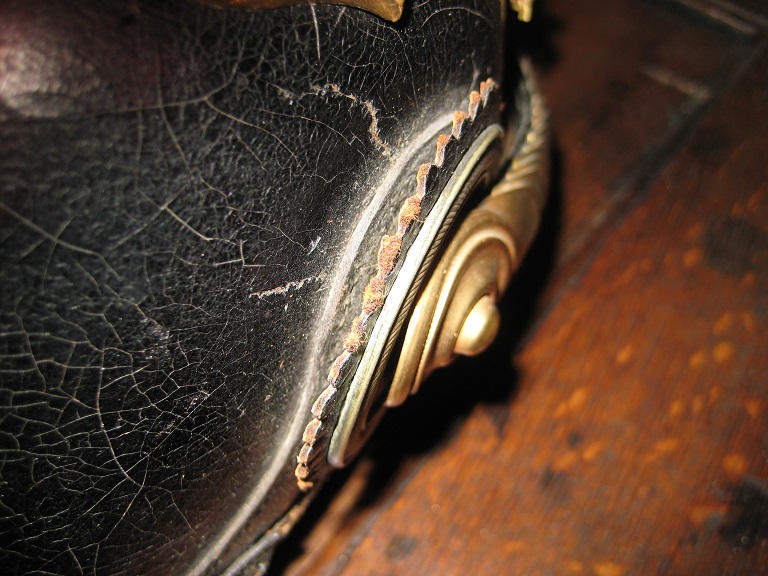 This is on a Model 1860 Train Officer's helmet.

Here are some that I have
Steve 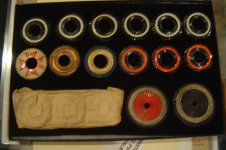 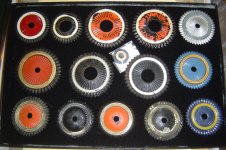 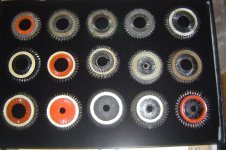