Can someone please illustrate an example of a 50mm smooth circumference Wurttemburg Officer Kokarde? I have literally never seen one and need to know what I am looking for to help in restoring an 1871 Border Guards Officer helmet.
While on that subject, might I suggest a specific category on Kokarden? The subject is difficult to find within the existing categories of helmets/components .
Cheers all,
Steve

From the deafening silence I am guessing I have exposed my stunning ignorance by asking this question!!
I include a picture of the Helmet taken before doing any work on it - the Kokarde which once lived there has left marks of serrations AND a smooth mark at the outer edge, which made me think an 'un-serrated' edge Kokarde was what I needed (the outer 'ring' mark measures 50mm). Was I completely off the mark? Fact is, I have NEVER seen a (dismounted) Wurttemburg Kokarde that was not an 1891, so I have no idea what it is that I need! Can anyone help ?
Thanks (from a position of ignorance!)
Steve 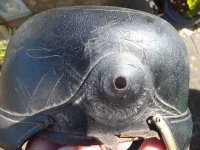 Staff member
Sorry Steve, I missed this post otherwise, I would have answered. We did have a kokarden section under the general area of “Pickelhaube Discussion “ I thought it had been pinned but as there has been some major changes here of late, things may have been lost. This kokarden thread was also hit heavily by the Photo Bucket stupidity. Anyway, I agree, why not give kokarden an area of it's own? I will post photos of a Wurtt. officer kokarde below. I would also like to add that one of the primary reasons for the success of this forum is that we don't or should not "crap" on folks who are new to the hobby or are simply asking for information. Every question has merit. Again my apologies Steve for having missed your kokarde question.
Last edited: Apr 9, 2021 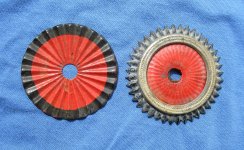 These came off the same Wurttemberg officer helmet. In my experience, the Wurtt. kokarde is painted brass however, this appears to be some light metal which has been painted in the State colours. 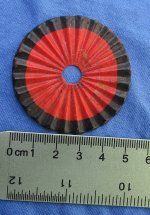 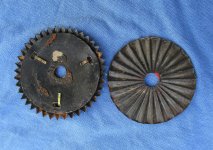 I hope this helps you out Bob, feel free to ask further questions. I will also look into creating a specific kokarden area here.
Last edited: Apr 9, 2021

I am not sure if this is about the kokarden? Greetings
Wojtek

Staff member
I took a closer look at your helmet photo Steve, I would agree that the marks indicate a smooth edge officer kokarde however, it could be Baden officer as they are also smooth.
Last edited: Apr 9, 2021

You can find a lot of informations about cocades here:

and with help of a translation-tool also here:
http://terra-culturae.e-monsite.com/pages/casques-a-pointe/les-cocardes-et-plaques.html
Have fun

b.loree said:
I took a closer look at your helmet photo Steve, I would agree that the marks indicate a smooth edge officer kokarde however, it could be Baden officer as they are also smooth.
Click to expand...

I would agree with Brian. The ripple seems to be only on the outer ring of the cocade. That would match the cocade with the flat disk Brian was showing.

Brian, Wojtek and Sandmann, many thanks for jumping in on this. I apologise if my second post came off as somehow critical, that was not my intention- I genuinely thought I had made some sort of brain-dead mistake in how I posed my request: perhaps asking for info on something that possibly didn't exist! Fact is, you go through a lot of stages in the learning curve, the first is learning that you know nothing, the second is learning how much you need to learn! and that second stage is pretty much where I am now. As I said, I had literally never, ever, seen a dismounted Wurtt. kokarde that was not an 1891 and so wondered if I was wandering off into the realms of fantasy under some half-remembered but mistaken impression. Brian, I had a vague memory of a Kokarden category from many years ago (when I first joined) but the Forum has gone through a lot of changes since then and am not surprised that some things fell through the cracks. It would be very instructive if it could be resurrected, so many thanks for considering that. Also very many thanks for the pictures which confirm I am not yet devoid of marbles, and the object of my search really does exist! I take your point about the possibility of the helm being Hessen but I can assure you that it definitely is a Wurttemburg Border Guard Officer helm, as per the EM example featured on Tony's site (and susbequently sold to Amy in 2017). The combination of squared front visor and round spike basis, plus the green and red inner visor liners confirm this as only two units ever used this configuration: the Wurtt. Border Guard (silver trim) and the Landjager Korps (brass/gilded trim). These were both model 1871 but only issued in 1891. Incidentally, as per Tony's site information, Border Guards only ever used a single Wurtt. kokarde as they were not an Imperial force and, as if to confirm my thoughts, my helm has NO marks of a kokarde ever being on the left side!
I was lucky enough to find this helmet in awful condition whilst looking for a 'parts' helmet to do other restorations. At first I didn't 'get it' and thought nothing of it, but later realised I had found a rare little beast which I could not just scavenge for parts - I just had to help it out. Now I have re-stitched the front visor, acquired a spike and chinscales and wappen for it - just the kokarde still left to find and then I will start to block out the skull before attempting a re-finish from the fascinating recipes that have been exhaustively discussed in the Restoration section.
Once again I have learned something new, like I do most times I log on, and I thank you all for taking the trouble to educate an idiot!
All the best,
Steve

Staff member
The main thing Steve is that we were able to help you out, provide the information that was needed and no, you are not an idiot. A smart person always reaches out with questions to gain knowledge. I get smacked down here quite often by our experts, people who have a better mind for facts and minutia than I do. Even these personalities do not have all the answers, there is always something new to learn here and that is what makes this forum great. Good Lord, how boring would this forum be if nobody asked questions or if we didn't get into a bit of controversy/heated discussion on occasion?? So gentlemen and Lady, Game on let's continue to learn here.
C

Good evening Steve,
No problem, the forum is made up of people who know, and others who are eager to learn. After more than 50 years of collecting, I have no more choice to learn ..., I still have to share my knowledge ... of peak headphones.
Regarding your cockade, you should know that most officer's cockades are of the 1867 model, with a central ring with double stripes in nickel silver (silver) and spokes ending in a point. The colors evoke those of the Land (Heimat). In 1897, the Landkokarde went from right to left, and was replaced on the right by the black-white-red Reichskokarde.

But some "Länder" had particular cockades, like the Hansa, with its red Maltese cross, Hesse, or Saxony, with their round woven cockades.
On the other hand, 3 officer's cockades were "ribboned" (evoking folds of fabric), these are those of Anhalt (green), Baden (brass and red) and that of Württemberg (red and black).

Another remark, this time about the helmet. Württemberg's troop helmets showed a round-braced spike with a round visor, officers' helmets a cruciform base with an angular (square) visor. On the other hand I guess on your helmet a round base with a square visor, thus effectively "Police, Gendarmerie, Customs or Fireman".

Hello Clovis, thanks for adding your comments - every little helps! You are quite right, this is a Wurttemburg Border Guard Officer helmet and as such is an 1871 model, but first issued in 1891, and it does have the circular spike base with a squared front visor. Tony's Kaiserbunker site has a wealth of information on this unit and the Wurtt. Landjager Korps - the only two units outside of Police/Fire to use this particular combination. It is thanks to his descriptions and pictures that I first realised what this helmet actually was, and decided to restore it rather than cannibalise it for parts.
Now that I can be sure which type of kokarde is correct I can go hunting for one, starting with a 'Wanted' ad here after that comes the hard work of re-finishing.
Steve.
You must log in or register to reply here.
Share:
Facebook Twitter Reddit Pinterest Tumblr WhatsApp Email Share Link
Top