On 19 November 1813, through a Cabinet Order, Kaiser Friedrich Wilhelm III approved the formation of a Pioneer Korps from the Mansfelder Bergleuten. The majority of the unit was to come from Mansfeld and Eisleben; however, the enlistment area was extended to the salt mines and other mining areas of Wettin, Löbejün and the Unterharz. On 23 November 1813, the director of the Eislebener Bergamt, the Oberbergmeister of Veltheim, called for the formation of a volunteer pioneer battalion composed of Mansfeld mountain men, huntsmen, and miners. Because of their importance in the mining industry the men of Mansfeld had, as long as anyone can remember, been exempted from military service. Copper and silver were particularly in demand during wartime, so the Mansfelder miners assisted the war effort in ways other than fighting. Under the famine created by the earlier Napoleonic wars, and as a result of the need for copper and silver declining, the Mansfelder miners and their families suffered most. The breath of revolution and the hopes of a better life caused more than 600 men to volunteer for service as early as December 1813.
The Mansfelder Pioneer Battalion served fairly autonomously and operated as companies attached to different Korps. The second and third company marched on 22 March 1814 to Preussisch-Minden and later to Erfurt. They assisted in laying siege to Magdeburg. The first company arrived later with the battalion staff to complete the Magdeburg campaign. In the spring of 1815, when Napoleon returned from exile on the Isle of Elbe, the battalion was called on again and the fourth company marched with Blücher against Paris. The first and second company participated in the storming of Maubeuge, Sambre and Meuse and were part of the march through the Ardennes, as far as Longwy.
The Mansfelder Pioneer Battalion was officially disbanded on 27 March 1816.
10 members were awarded the Iron Cross and the battalion was awarded two Russian St. George’s Orders, fifth class.
This is an original officers Tschako from the Mansfelder Pioneer Battalion. This battalion was always identified by the glistening silver oval with crossed hammers appearing on their Tschakos: 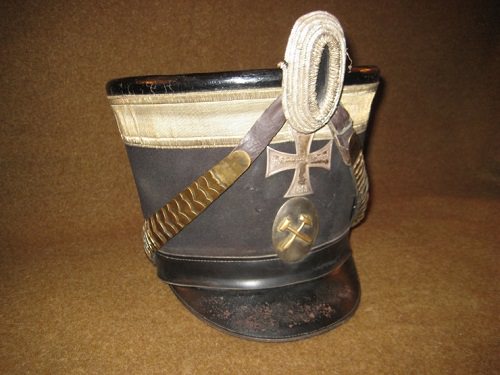 The Mansfelder Pioneer were originally outfitted with uniforms already in stock. The Tschako chosen for them was the Fusilier type: 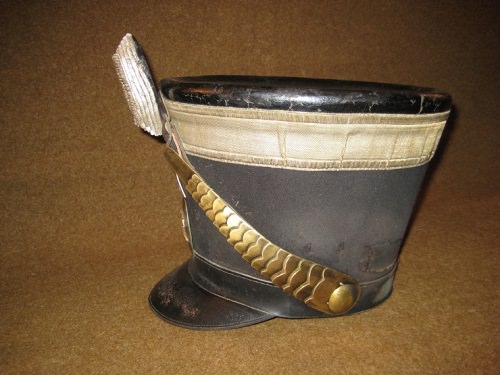 There are several holes in the Tschako body where other fittings had been placed. There is no historical record of the Mansfelder Pioneer ever wearing cords on their Tschakos so the fittings on the fusilier helmets were removed: 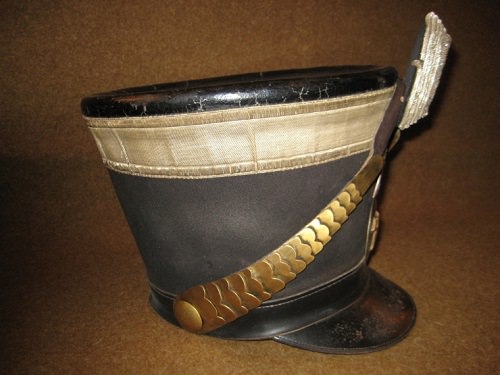 It would have been another question as to authenticity if these holes were not present: 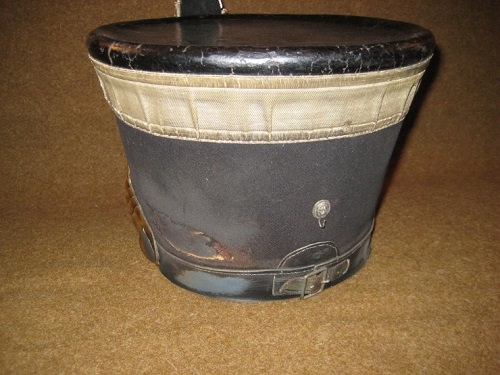 This Tschako has had some work. First and foremost this piece has been blocked in order to bring it back into a round shape. Unfortunately this blocking caused a "pull" in the liner which caused it to buckle and created a dimple or wave in the tongues: 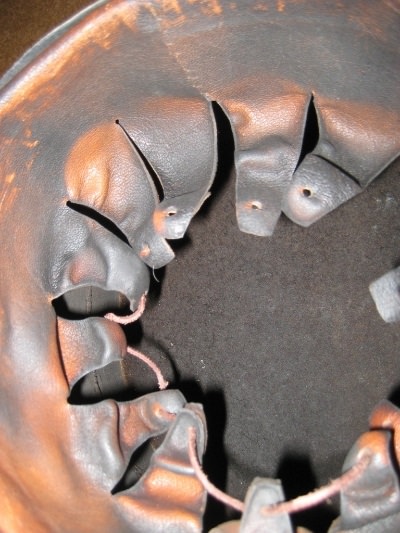 The stretching, or pull, is evident here: 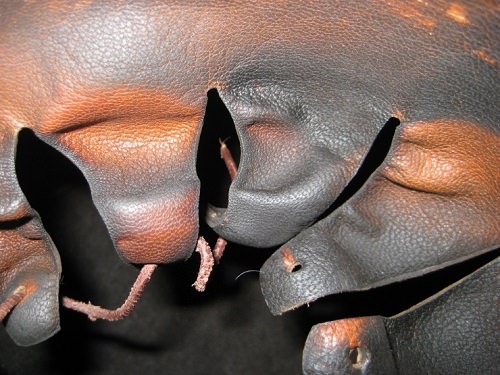 The Tschako is made of a combination of leather and fiber. The bell crown is a heavy fiber board which somewhat resembles a mailing tube. The outside of the bell is covered in a heavy felt, most of which is missing now. The dome is thick leather and is very roughly tanned on the inside. This rough, almost fuzzy, interior is often evident on other period pieces. The inside is lined with a cloth which is sewn and applied much the same as paper mache and there is a reinforcement sewn in to support the Feldzeichen: 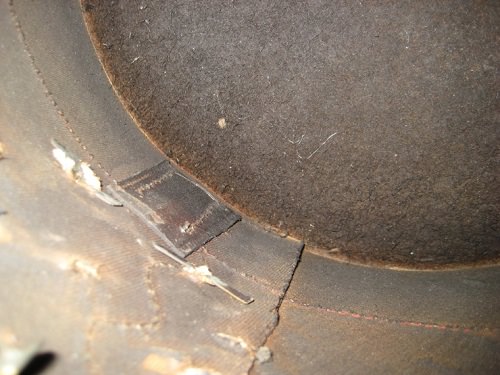 The chinscales have been restored using the original scales. The staples are not original to this piece and they are made of round stock. The leather for the chin straps and the tubes has also been replaced, but the leather for the chin straps themselves is thinner and much softer than the original. This was done originally to avoid excessive weight being applied to the Feldzeichen area: 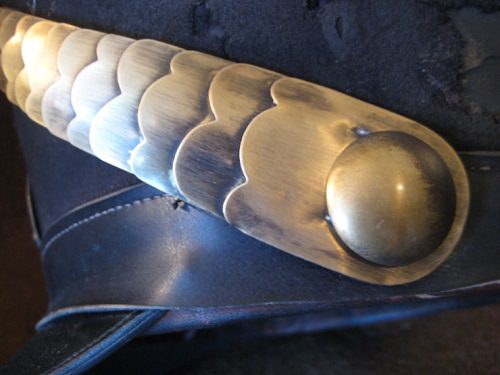 The original scales have a slight curve and measure 39mm at their widest point: 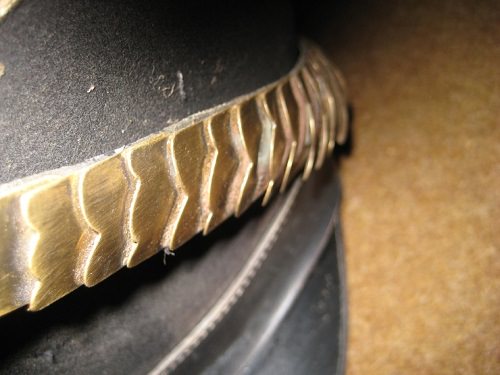 The length is appropriate for the leather chin strap: 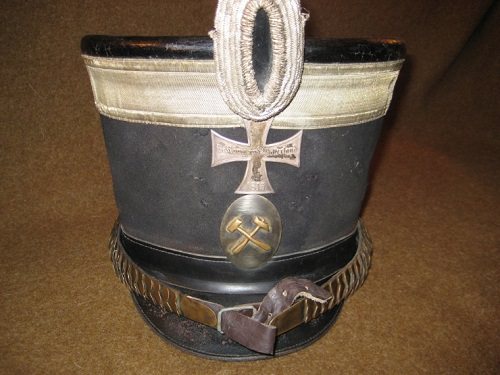 The rosettes are original and are held on with bent pins. These bent pins are much wider than would be found on most Pickelhaubes.
The Feldzeichen is very large and is made of silver bullion thread. This larger sized Feldzeichen apparently continued in use for officers until the 1860's: 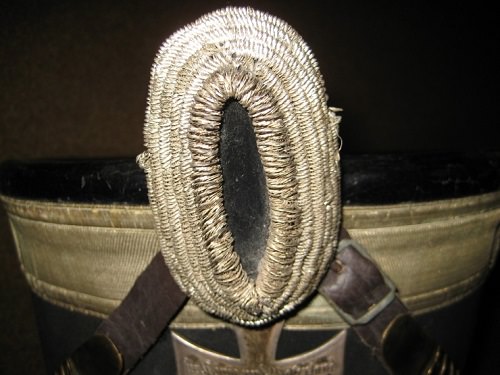 The Landwehr emblem is non-magnetic and is held on with bent pins: 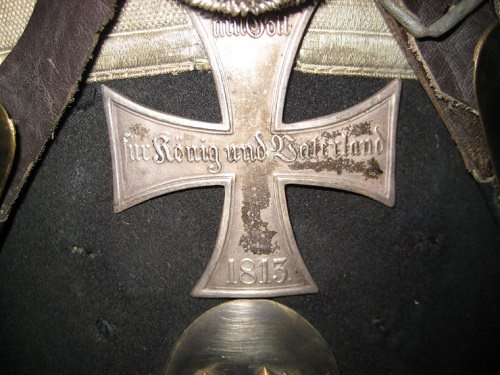 The Mansfelder Pioneer identifying feature is a silver oval with crossed hammers. The oval is made of coin silver, about .825, and is held on by the screw fastener attached to the hammers: 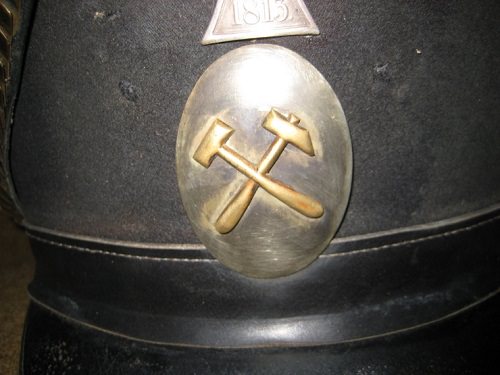 The hammers are made of brass and have a single screw going through a hole in the silver oval and holding the whole thing in place. There is an unusual brass wingnut attached on the inside to the course threads on the hammers: 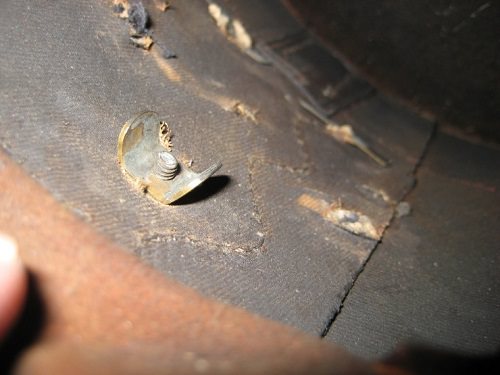 All together it gives an attractive appearance: 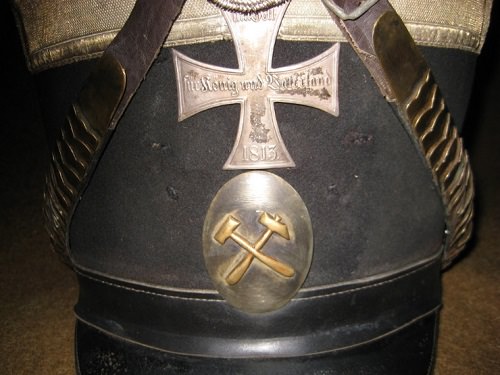 The top of the bell crown is thick leather: 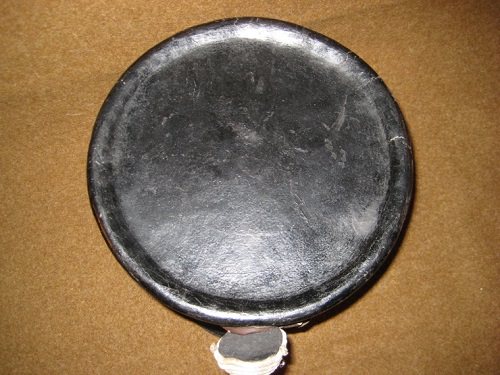 The silk band around the top of the bell crown is in excellent shape and is, in part, a give-away as to age. Silks were weighted with soluble salts and minerals after 1840 which caused them to have a slight glow under black-light. This band is completely dark under black-light. As a matter of fact, absolutely nothing on this Tschako glows under black-light: 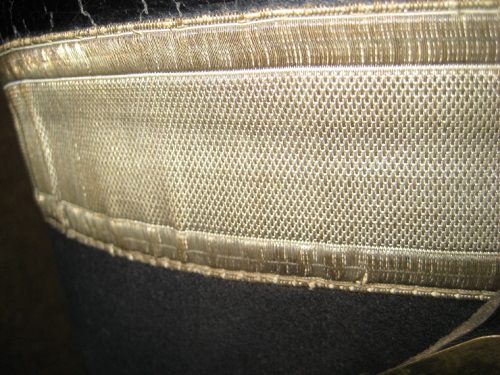 The leather on the shoulder is extremely stiff and curled in some places. The stitching is finely done and, again, does not glow under black-light: 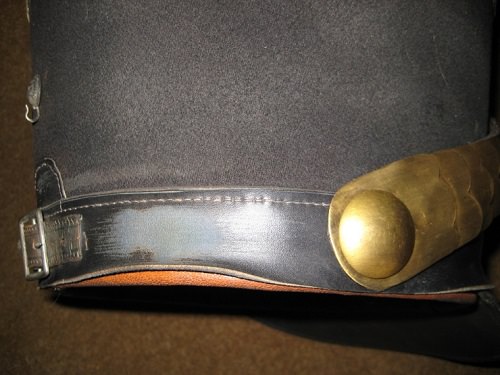 The Tschako, not including the Feldzeichen, is 8.5 inches tall when measured from a flat surface. It is shown with a Model 1915 Tschako for comparison: 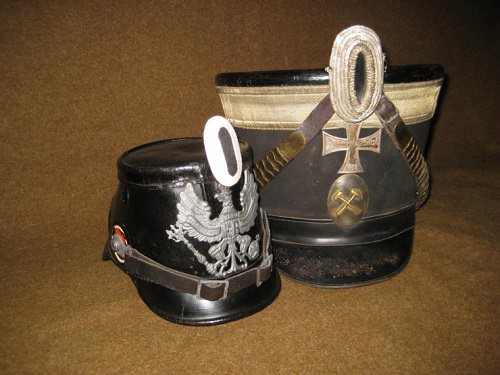 This Tschako has had some work done in the hopes of keeping it alive. It is, after all, 203 year old cardboard. 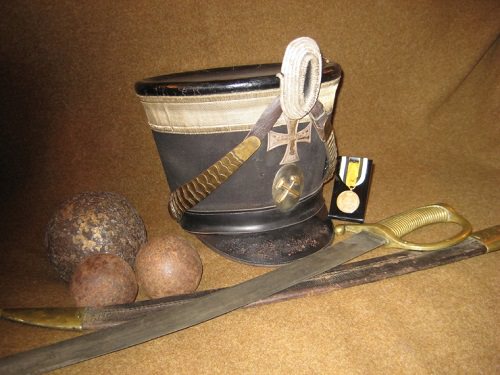 There is still a reenactment group for this battalion. For more history or information you may visit their site at:

Nice shako and thanks for the insight.
Top

That is a pretty rare thing. As the battalion was only established for 19 officers, there cannot be many originals lurking around.

Perhaps a handful more as replacements during the war.

Glennj wrote:That is a pretty rare thing. As the battalion was only established for 19 officers, there cannot be many originals lurking around.

Perhaps a handful more as replacements during the war.

The battalion started with 800 but was augmented at different times with additional personnel.
I researched this helmet for about a year before I bought it. It came out of a state collection in the Mansfeld and Eisleben region of East Germany. The collection was centered around mining in the area and not the military. Apparently this Tschako was blocked and the chinstraps restored for that collection. It was likely "allowed" due to it's tie to mining; however, the Soviets may have accepted it since Prussia was on Russia's side during the Napoleonic Wars.
I definitely questioned the authenticity of this piece before I bought it. Here is some of what I found:
The inside of the helmet dome compares exactly to museum pieces.
The silk band does not glow under black-light and the care taken in the stitching is much higher quality than any replica that I have seen.
Centenar Anfertigung were not produced to these standards.
The Mansfeld miners mined copper and silver and silver was used for the oval emblem.
I verified the silver chemically on the back of the oval and it is silver. Unfortunately it looks like someone had polished it with sandpaper at some point.
The Mansfelder Pioneer were outfitted with existing uniform items and Tschakos were modified for their use, perhaps multiple times. Officers included.
No cords were worn by the Mansfelder Pioneer on their Tschakos so fittings were removed from existing Tschakos.
The chinscales mike out perfectly to the thickness of the scales on my 1809 Kurassier.
The tongues on the liner compare to other early tongue examples starting in 1810.
The additional holes in the sides of the Tschako line up properly for earlier fusilier fittings.
The additional holes in the front could possibly line up with early French fittings indicating that this was initially French and refitted, perfectly legit. I doubt this; however, because there are too many discrepancies between this and a French shako, the liner for example.
I do not know exactly how fiber board ages, but if the sides of this helmet are pressed, cardboard dust comes out of the holes. It is dry.
The Landwehr cross measures correctly for the period and the bent pins match other examples.
The rosettes match existing examples and the bent pins compare to a similar example shown on Sergio's website (currently for sale).
The threads on the crossed hammers match the unique "Prussian thread" used on earlier pieces including earlier Pickelhauben.
The felt behind the Landwehr cross and the silver oval indicates that these fittings have been in place for a long, long time.
There were very few officers attached to the Mansfelder Pioneer and they had no representation at Korps level.
Augmentees to the battalion were allowed to wear the oval insignia.

Unfortunately there are not many 100% pristine examples to compare these to. Even museum pieces have often been restored for presentation, like this one.

I may never know how much has been restored on this Tschako, or if anything has been added. Eventually I hope to have it verified through multiple sources as I did with the 1809 Kurassier shown here:
http://pickelhaubes.com/bb/viewtopic.php?f=41&t=10632

Until then: I trust the dealer, I did the research, I got an equitable price, and I took a chance.

That is a beauty Skipper. I appreciate the education.

A really excellent old beauty, congratulations John. I always learn a great deal from your posts and the pictures of pieces in your collection. Thank you.
Remember, Pillage first THEN Burn ...
Top

Have never see such model until today

Great helmet
Thanks for posting this one

Well picorator didn't work so the post has been updated, again, with Imgur.
Hopefully the photos will stay put this time.

Wonderful Tschako, thank you for the nice explanation