Really nice work! The amount of detail is incredible and the paint jobs are fantastic!

Very nice indeed! I used to do a lot of scale modelling, but my hands do not work as they used to.
Here is my last project, a British WW1 tank. 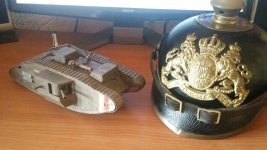 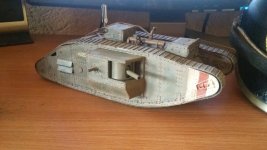 coert65 said:
Very nice indeed! I used to do a lot of scale modelling, but my hands do not work as they used to.
Here is my last project, a British WW1 tank.
View attachment 13493View attachment 13494
Greetings, Coert.
Click to expand...

coert
You did an excellent build of the British Male tank! It motivates me to pull out my MK IV and take a crack at it. Which version is it and who was the maker of the mode?
Best regards
John

It is an EMHAR product, but I just saw that they only produce the Mk V now. My model is the Mk IV, but they discontinued that version.
It is the socalled Hermaphrodite version, with the six-pounder gun on one side, (Male version), and the Lewis gun on the other side, (Female version). Scale is 1:35. Here a picture of the Mk V kit emhar is still selling. They have lots of nice models in their catalogue, so check them out if you want to make more models. 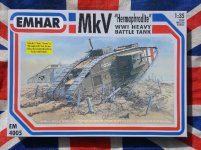 Have fun making your Mk IV, and a good weekend to you John.

Thanks Guys.
It means a lot .

Your Mk IV does look good.
If I ever get caught up I will start a 1/18 WW1 line starting with the A7V then do a Mk IV as well.
J

Coert,
Thank you for the information on the manufacture of the Mk IV. Your Emhar looks great. I have a Takom MK IV I bought some time back, time to pull it out.
Thanks
John

Time for an update on a few consignments 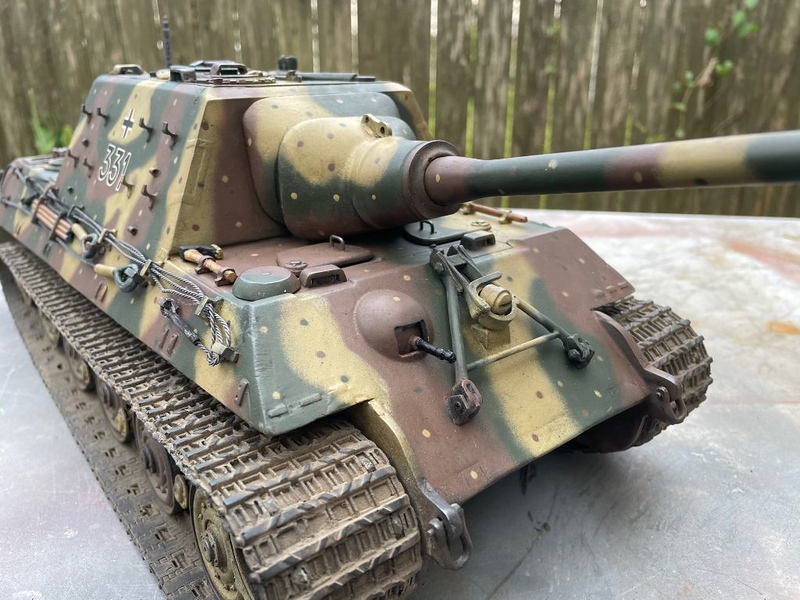 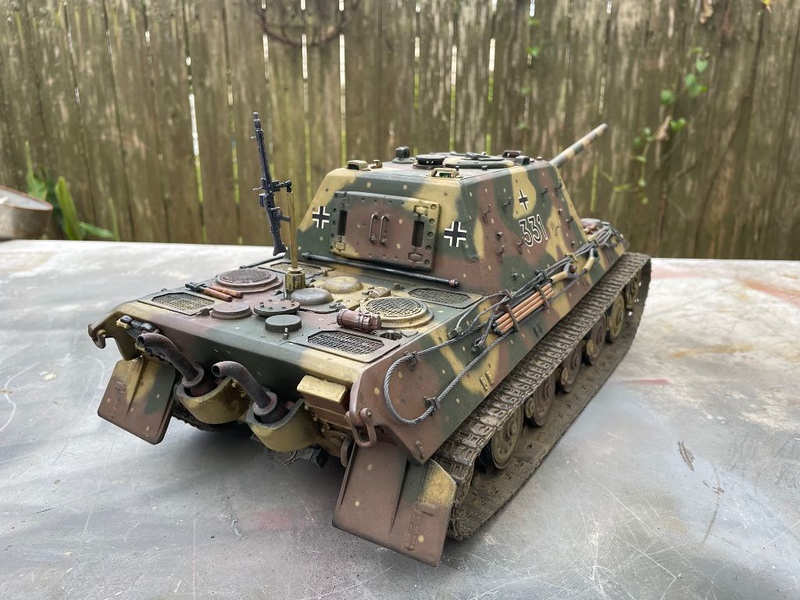 This next King tiger was orderd from a guy who had a painting of 003.
The scale was not quite right in the painting but he wanted it just like the painting.
I think I got it close.

This is what I have on the work bench now or at least trying to copy it. This Jagdpanther is 1/35 scale and will be a challange to make it in 1/18th scale.

This is amazing and impressive. What are these models made of?

911car said:
This is amazing and impressive. What are these models made of?
Click to expand...

I make these out of resin.
I made the prototypes ( 1/18 scale ) out of styrene.
I broke it down into parts made molds of the parts and casted them.

THESE ARE NOT STORE BOUGHT MODELS I HAVE TO MAKE THEM !!!

I do not do decals
I have a sign maker close by who cuts stencils for me.
All of the markings ( crosses, stars numbers ect. ) are painted on

I finished this Jagdpanther about 3 months ago. 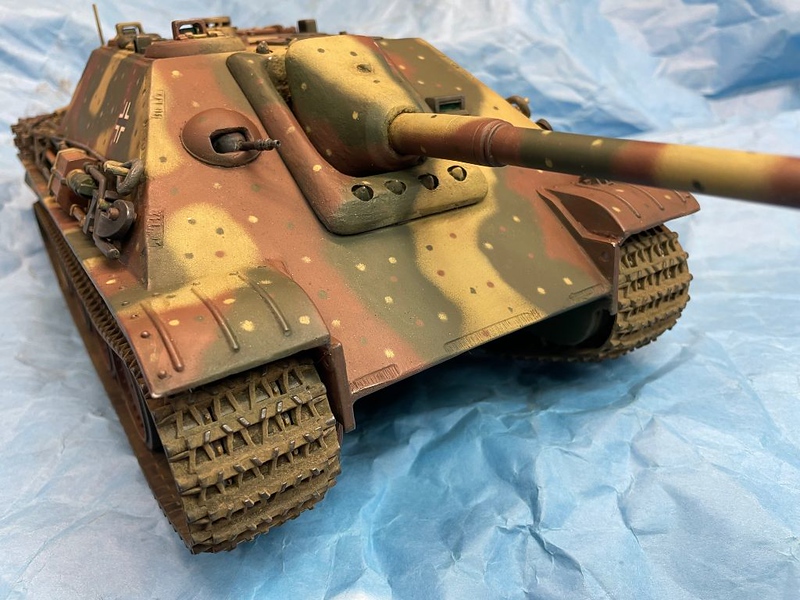 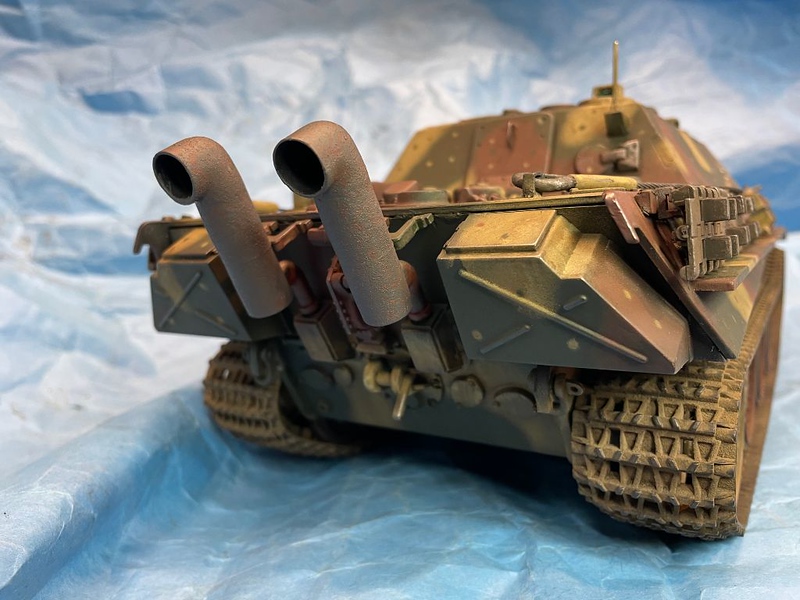 Staff member
You really do superb work. In particular that you don’t saturate the Armour in rust. Panzers went into combat new. I served 35 years on Tanks and never saw a rusty vehicle. Not once. Of any type.

You even cast the track links? That nuts! Last question, do you ever sell the parts as kits? Or custom built like we see here? I am a respectable model maker but not even close to your talent. I always enjoy your postings with excellent images as well. Nicely done.

Yes I am a firm believer of no rust.
Sometimes when these AFV went to war they may have lasted a day or week rarely up to a month .
Most guys rust out the tracks or tail pipes , highly unrealistic.
Go outside and look at your car's tail pipe.
It should be gray unless your car is over 20 years old.
I do not make them pristine they are dirty and for some reason in the pics the white paint shows up bright , in hand the white is dingy !

At first when the molds are new I sell kits after about the 15th casting the molds start to wear . After about the 20th pour I start shutting down the kit sales and start with my own full builds. Because the molds start coming out a little rough .
In the rough condition guys who may buy them may complain so I stop the kits and switch to the building mode.

Most guys who commission me want a certain tank from a certain company.
The paint scheme camo on my latest Jagdpanther was copied off of my Jagdtiger.
Most certantly not a real scheme but it sure looks cool and so do other guys so I need to make 2 more just like it.

This is my second run for the King tiger.
My first run I made the track links ( stiff resin ) one by one. LOTS OF WORK !!!
Too much work in fact so I made long lengths for the top and bottom run with singles around the rear ideler and front sprocket. STILL TOO MUCH WORK
Now I made new molds again and I use a rubber type resin and I make the tracks in 2 pieces and they wrap the running gear like rubber bands
You must log in or register to reply here.
Share:
Facebook Twitter Reddit Pinterest Tumblr WhatsApp Email Share Link
Top