This one just arrived from overseas and I am super happy with it.

Everything is in great shape and correct to the piece.

Nice catch James; congrats! A similar one recently sold on eBay but with an Uberzug.

In order to understand better: Why did certain Beamte Off. Pickelhaubes come with a cruciform spike base (hence a square visor) and others like this one with a round base & visor? Any distinction there?
Cheers!
Ronny
Top

The way I see it and understand it. Paymaster where upper military officials so part of the military. Beamte where Civil officials so not military.

Paymasters would use the same helmet guidelines as a Prussian officer with the exception of the metal parts all being in Silver except for the small adler which is brass.

Hey James, that is in nice shoip.
Best
Gus
OK, they are dolls, but they have kung fu grip! and weapons.
Top

Incredibly complex subject. We took a swing at on pages 185–188 of the Handbook. The 2004 reference by Stubbs also takes a swipe. Pretty complex and no simple box to place it in.

Of note–this area was severely affected by the language reforms. Therefore, you often see the same thing spelled different ways. There were a lot of differences by type–I think Glenn has the best handle on veterinarians as they moved to regular officer types but this is not an easy jar to open.

Well here's the one that recently sold on eBay which was briefly discussed in a previous thread:
http://cgi.ebay.com/Original-PICKELHAUB ... 3f0a2347cd

It's quite similar except for the stars which seem to be brass...
Cheers!
Ronny
Top

Unidentified Prussian Beamte The small eagle on the helmet plate was not authorized until the AKO of 15 May 1905. Prior to that, it is much harder to identify a Beamte. 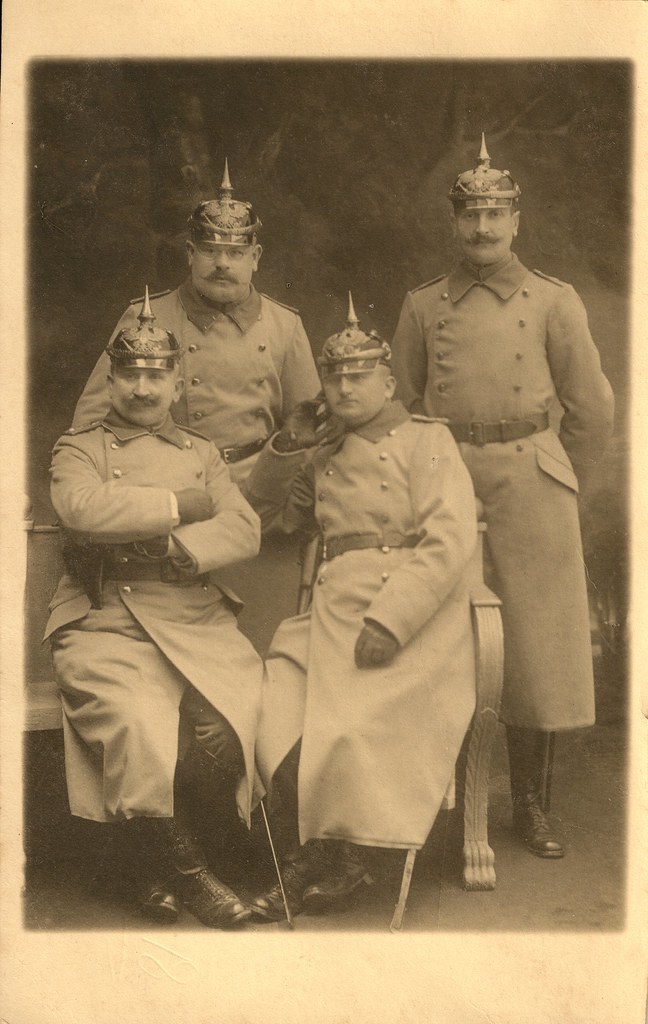 ps1135 by joerookery, on Flickr
VR/Joe
www.pickelhauben.net
The British philosopher and historian R.G. Colligwood said, "it is not
the facts that are interesting in history, but the questions and their
answers - and these can never be fixed.
Top

Hey Joe, what would the below be then?
To my knowledge, this is an M1897 Officer Beamte and it has both the big & little birds... Does this mean the little bird was added afterwards or that the entire haube is post 1897 production? (note the cruciform spike base and the square visor, same as in your photo)

I don't know. I believe the 1897 number is a model number. Whether the little bird was an add-on after 1905 to an older helmet or not… I just don't know.

As a basic rule of thumb, most Prussian Military Officials and Civil Officials of the Military Administration wore a Pickelhaube with square visor and cruciform spike base. There were some exceptions:

It's good to be back however I visited your wonderful country three times in the last month. Without question the best hotel I have ever been in was in the area of Belfast in Northern Ireland! Not always fond of British food and definitely not a fan of the cost of British food. A lovely time we were there at the same time that the Queen was in Ireland. But alas this has little to do with paymasters, lower, upper, private purchase for all of the other confusing piece parts.
VR/Joe
www.pickelhauben.net
The British philosopher and historian R.G. Colligwood said, "it is not
the facts that are interesting in history, but the questions and their
answers - and these can never be fixed.
Top

glad you had a good time in the UK. Everything in this blasted country is expensive!!

Bump this back up to the other discussion.

Ok, I mentioned that Randy T had photo copied an entire chapter from a German reference on Beamten. There are 18 single sided pages on Uniform der Beamten and 6 pages showing diagrams of uniform, helmet, wappen visor cap etc. There are 6 different Beamte officials diagrammed and described on each page, so at least 36 officials. The 7th page has drawings of the small devices placed on the larger wappen (like the wee eagle), the small shields (wappenschilder) that were worn on the shoulder boards for each state. There was even a Reichs Beamte organization that wore a silver version of the Reichs wappen with gold shield and black eagle in the middle.
Randy basically was kind enough to go through the pages of text and translate that portion which described the helmets worn by that particular official. For example, the translation of the "Preusen Obere Militar und Zivilbeamte der Militarverwaltung" helmet description: Helmet of senior officials were generally squared visor, cruciform spike base (trim colour silver or gold based on uniform buttons) Wappen eagle same colour, without bandeau but with FR, small eagle of contrasting colour on eagle tail. Convex chin scales, same colour as wappen with officer style kokarden.

The junior pharmacist (Unterapotheker) and paymaster - inspectors: Same helmet as the senior official (previous) without small eagle on tail, round spike base fasteners instead of stars.

So looking at James' new helme, and using the descriptions translated by Randy, it meets all the criteria of a Senior Paymaster Officer. Ronny's helme seems to be a senior officer in the military administration except for the fact that it has the Mit Gott bandeau on it. However, as we all know, there were regulations and then actual reality. I am going to email Randy and get the title of the reference that this all came from.
Remember, Pillage first THEN Burn ...
Top

Nice one James. I am very interested in the diverse military administrative helmet such as this. I recently picked up a Medical Officer which was the helmet you show but all in gold. Congrats......
Top

Thank you Brian. I had actually bought that helmet from Randy/AOK and it was described as follows:

And from what I learned from Joe, the small eagle on the wappen was not authorized until the AKO of 15 May 1905.
Cheers!
Ronny
Top
Post Reply
23 posts • Page 1 of 1