Before and after pictures of restoration projects

Most of my restoration work involves helmets from the good old USA but occasionally, I get one from a bit further away. As the title of the post suggests, this one is from Australia! This helmet has some unusual characteristics: it is dated 1917, has an M15 style un dyed liner and something I have never seen...one steel grommet and one brass grommet for the wappen. As will be seen in the pictures there is also a black flat head split brad filling in a hole beside the brass grommet. I have seen these black brads before on helmets so no surprise. The brass fittings despite the one steel grommet are original to the helmet, the piece has not been messed with by some collector. The helmet was sent to me primarily to have the rear visor restitched but other problems arose. So, let's take a look at the before fotos:

The wappen was not sent with the piece but the spike assembly was. We can see the 2 contrasting grommets here plus the flat brad and a collapsed/pushed in shell top. The missing areas in the shell are going to be replaced with new leather glued into place

The rear visor needs restitching but the brass spine also needs a bit of re soldering as the split prong brad has detached but it is still there (yaa!). The right corner of the visor was glued to the shell by some previous owner...ugh!!

The collapsed top has to be dealt with first...the area was wet then placed on a head form with some "elastic pressure" A plastic bag is put on the form so the styrofoam does not stick to the leather. The depressed/cracked area in the foreground was also wet later and pushed back into place.

An inside view showing the M15 liner and splits in the shell top. The liner looks in good shape BUT there are some hidden problems.

This picture shows the patch that was glued into the shell, this will be hidden by the spike base disc. You can also see that part of the liner edge has split off the shell rim. We also see the prongs of the black flat head Brad. To be continued....
Remember, Pillage first THEN Burn ...
Top

Another interesting restauration. I‘m looking forward for it

Thank you for sharing

As usual I can't wait for the next installment. Love these postings
fezzes frigidus es
Top

The rear visor pinned in place, all stitch holes cleaned out, we are now ready for the restitch. The lines in the shell left by the rear spine provide an excellent guide as to getting the shell holes and visor holes lined up. Special care must always be used in this part of the process. If the holes are not lined up correctly, you really can't do a decent job. 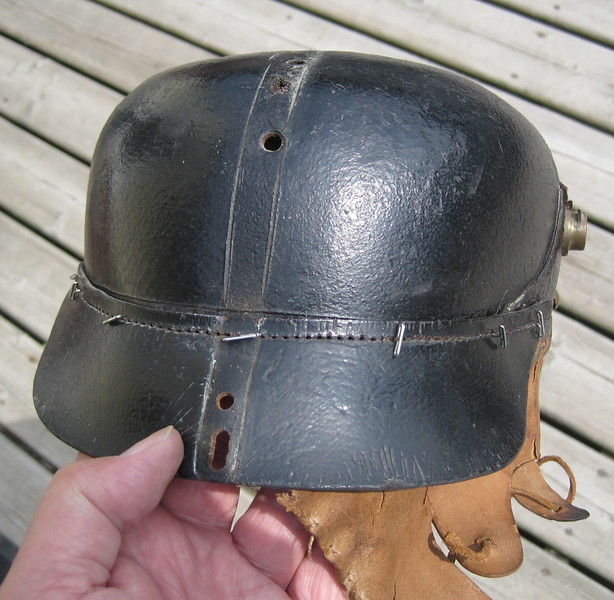 Some finish was applied to the cracked areas in the shell in order to stabilize them, I can't fix these areas but they are back in proper position and will stay there.

Disaster!! The process of restitching put a lot of stress on the liner....the liner must be pulled up and out of the shell to access the stitch line inside. Some liners tend to flop around as the shell is shifted back and forth while stitching. Most liners go through the process without issue. This one however split along the rim of the shell. The 100 year old leather was too thin, dry and brittle to survive the restitch. This has happened once before on a very small helmet (52cm) which I called "Little Willie" in a previous post here. The only solution is to glue thin strips of leather along the split.

The paper clips were to keep the liner tearing further as I finished the stitch.

Love your explanations... You should collect all your Restoration-Posts in the 1st Pickelhauben-Restoration Book

What kind of Glue do you use? A modern Leather-glue or a kind of Fish-glue or Skin-glue?
Best wishes, Sandy
Top

Thanks Sandy glad you enjoy these posts although I don’t think many people would buy a Spikey Hat Restoration book.

. The glue used is Tanner’s Bond Contact Cement. It is specifically made for leather.
Remember, Pillage first THEN Burn ...
Top

I would be a fan on sutch a book ,just to see al those great closeups on the problems and issues you comme across in restoring any helmet
Even it is great to read al the steps you must go thru to complete a restoration
It would be temendous manual for al upcomming restorers

Restitch complete, spine brad resoldered and everything back in place.

All fittings on this helmet had a "gold finish" applied to the brass. You can see the scratches in this finish and the bare brass showing through.

Liner tears have been fixed....not perfect but as good as I can get it.It is quite difficult to install paper thin leather into the seam between shell and original liner using tweezers and the back edge of an exacto knife. I had to get my wife to hold the shell while I did "the operation". Some haube jobs require 4 hands!
Remember, Pillage first THEN Burn ...
Top

As much as I would love a book on restoring these helmets and would purchase one, I'm afraid of who else may purchase it and how the info would be used.
fezzes frigidus es
Top

kaiser wrote: ↑
Sun Jul 29, 2018 2:03 pm
I would be a fan on sutch a book ,just to see al those great closeups on the problems and issues you comme across in restoring any helmet
Even it is great to read al the steps you must go thru to complete a restoration
It would be temendous manual for al upcomming restorers

That was my intense too. There are a lot of books for collectors on the market, but no good books about the care and repair of Pickelhauben. I also found nothing about the build of Pickelhauben, Tschakos or Tschapkas. It would be really interessting to see old technical drawings..., can‘t imagine that there is no drawing left but unfortunately I did not find one until now

The top area which was crushed and broken originally, most of it came back into place after wetting and blocking. Cracks were then filled with finish to stabilize everything.

I put a spare wappen on the piece just to see what it will look like back in Australia. Not perfect but better than it was.

Thanks very much gentlemen!
Remember, Pillage first THEN Burn ...
Top

Nice job and thanks for your explanation!

I really admire the skills you have doing this.
Thanks for posting all the jobs you do with these projects on the forum!
I really enjoy seeing them.