Moving on to H R 9 .
here is an officers H R 9
shown with the H R 9 Parade Attila in the rank
of Gen. der Kav.
This was formally in my collection .
Now in the Brain Sanders Husaren collection .
Note the special wide collar and braid for the rank of General
Also all the many loops for medals and breast orders .
This Attila was worn personally by Carl Edward of Sax.
Colburg & Gotha as Chef of H R 9 .
I still have his original wedding day photo wearing the uniform
of H R 9 with his wife . Both had signed the photo .
From the Jacques Pries collection
Steve

Could you post the wedding picture in its entirety. One hell of a collection.
VR/Joe
www.pickelhauben.net
The British philosopher and historian R.G. Colligwood said, "it is not
the facts that are interesting in history, but the questions and their
answers - and these can never be fixed.
Top

I will try on the photo
Here is a short interesting story .
That photo and bunch more of super great photos
came out of an estate in Germany .
It was the family of GFM von Bock u Polack .
An American dealer living over there , Dean Krasomill
went to the sale and bought all the photos .
He offered them for sale for $2,000
A huge amount for those days for photos
I talked a collector here in Memphis to buy them all.
There were photos of the GFM with signed dedications from
Kaiser Wilhelm . He called von Bock his 2 GFM's because
of his double name . The GFM had a son in the 1st Garde Regt zu Fuss
His daughter was married to Kurt von Gillhausen .
Gillhausen was the Fugal Adjutant to Carl Edward .
That's how the Carl Edward photos made it into the Estate.
All a close knit group . I also have a signed photo
of Carl Edward in his parade uniform of the 1st Garde Regt zu Fuss .
2 great photos. When I obtained the Parade Attila of Carl Edward
for the H R 9 , I went to local collector and was able to get the
2 photos to display with the uniform .
Well Jacques Pries found out about my uniform and put
the pressure on me for a trade deal , as he always did .
We did the deal and Jacques ended up with the Attila
and the wedding photo . When I owned it , it was un-framed .
Jacques had it custom framed . A deluxe job , but now it is under glass .
I will see what kind of photo I can get for you ,maybe outside
with no flash . The Attila went from Jacques to Brian Sanders collection
and that is where it is now . Brian does not collect photos
so Jacques offered the photo back to me and I bought it .
At the Estate was the GFM 's sword .Ray Zyla bought it
and I bought the sword from Ray at one of the old OVMS
shows at the Drawbridge . Stephen Wolfe now has the sword .
Both of the GFM's batons were there and bought by a German
Military dealer .
I did end up with a single shoulder strap of the GFM
as later he was Chef of I R 55 , one of his old units .

This will be in Mike Kelso's book due out before long .
More later
Steve
Top

Fascinating story! Thank you.
VR/Joe
www.pickelhauben.net
The British philosopher and historian R.G. Colligwood said, "it is not
the facts that are interesting in history, but the questions and their
answers - and these can never be fixed.
Top

Col. J. :
Per your request .
The wedding photo signed by both Carl Edward
and his wife on their wedding day.
He is in the uniform of H R 9 .

Here is a bonus shot of Carl Edward in the uniform of the 1st Garde Regt zu Fuss
wearing the parade miter . It is also signed by him .
We can from his epaulettes that he is younger and of a lower rank
as there is no fringe on the epaulettes .
Steve 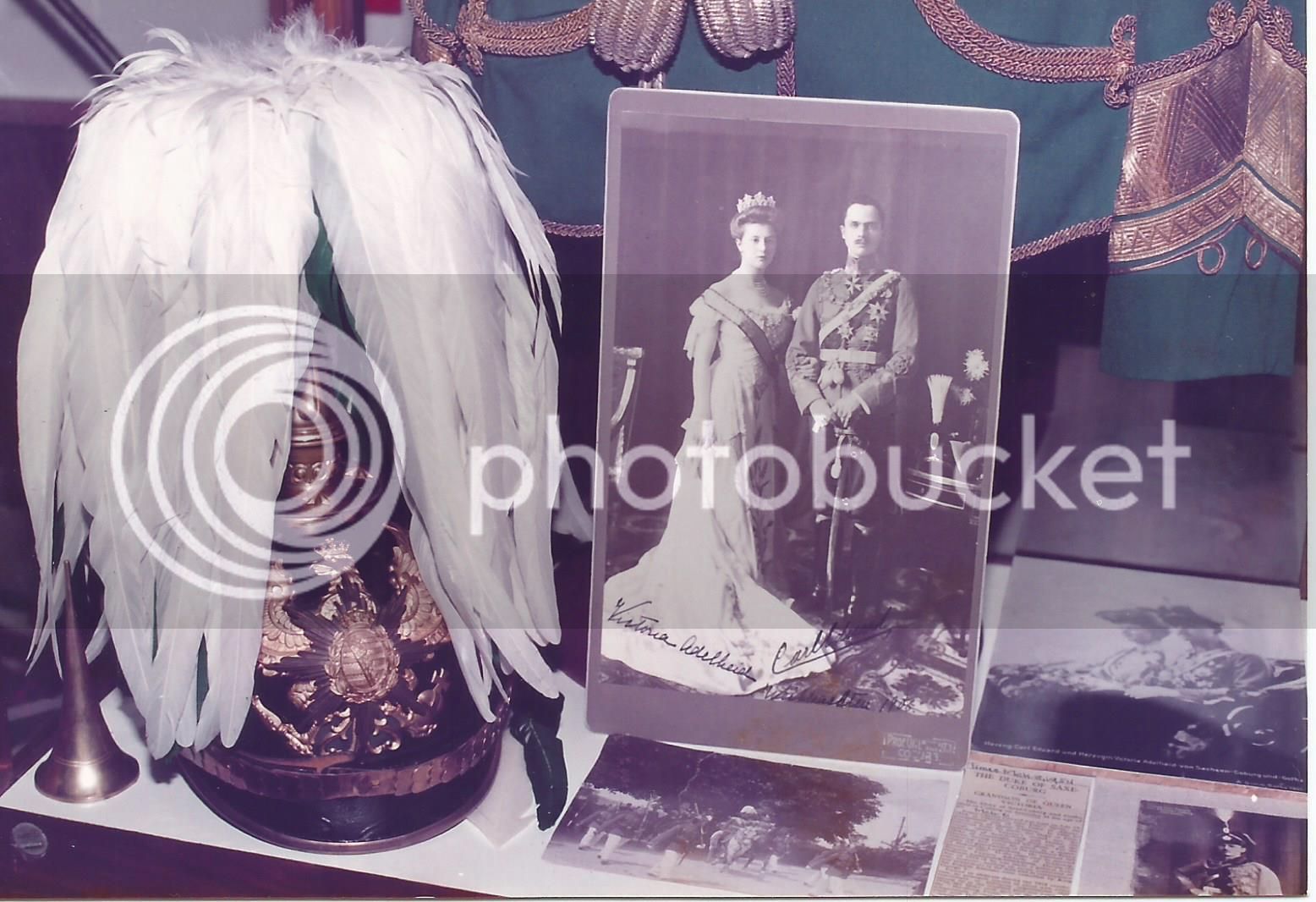 Col. J. ;
I just found an old photo that shows the Carl Edward wedding
photo before it was framed .
Next to it is his helmet as Chef of I R 95
with green & white feather bush .
I bought it from a Jan Kube auction
and sold it back to Kube later as he
had a German collector customer who wanted it .