As of 4 August 2010. Current photo list at http://www.pickelhauben.net/articles/Helmet_Makers.htm
The information on helmets is for research ONLY. It is NOT the only kind of helmet made by this firm. I am deleting posts after they have been acted on. The intent is to keep this thread pretty tight.
Last edited by joerookery on Tue Aug 03, 2010 10:08 am, edited 40 times in total.
VR/Joe
www.pickelhauben.net
The British philosopher and historian R.G. Colligwood said, "it is not
the facts that are interesting in history, but the questions and their
answers - and these can never be fixed.
Top

OK! here we go. It is almost midnight here on the beautiful East Coast of Canada and I have been stumbling around in my room all night half-cut on red wine (with Kaiser of course), looking at every helmet. Unfortunately most of the manufacturer's marks are blobs of ink. Many I have half a name or can make out some letters, but not the complete name unfortunately. And the Metallhelm, I just cannot get a good pic with this stupid flash. I'll get those later in natural light.

Believe the AK is the issuing depot. In this case Strasborg?
Mick

Joe do we have a maker: G. Leo Biberach ? I have this stamped (not ink) on the rear visor of my M15 Wurttemurg OR helme. I just took a close look at it while cleaning. Brian
Remember, Pillage first THEN Burn ...
Top

How do you photo these

how does one photo these marking's? any hint's would be apreciated.
Mark
Top

Joe- not sure if you have this one or not, it is on a Prussian M15 Tschapka

Your articles on makers marks, depot marks and unit markings are really gathering incredible momentum. With input from all over the world, I am sure that this will be the first time anybody has achieved such a comprehensive reference source on these subjects. I am glad I have been able to contribute.

Regarding the illegible makers mark on the helmet from Nathan Feingold of Michigan Ave. Antiques. I have an other ranks leather helmet with grey trim, ink stamped very clearly with the football shaped oval and the name "CARL SCHNEIDER - BRIEG" and 1916. Dan
Top

A new one from Bruno. any guesses on interpreting would be good.

Liner of JR115 Filz
VR/Joe
www.pickelhauben.net
The British philosopher and historian R.G. Colligwood said, "it is not
the facts that are interesting in history, but the questions and their
answers - and these can never be fixed.
Top

is it possible to make a larger pic? I guess first word is

A little closer I think is:

Joe's list of maker's marks is brilliant, very helpful. There isn't anything like it anywhere else. However, I've gone through it, and other less extensive sites, and been unable to find anything like one I have. Can anybody help? I have an M15 Prussian infantry helmet, dated 1916, with a maker's mark, standard small round type, lettering around the edge and something (date?) in the middle, but all I can make out is: "...use..in S.O." That's it. The 1916 is stamped elsewhere. I have not found any maker whose name fits those letters that I can read. Any help would be great.

By George, I think he's got it. To be precise, I would add the Umlaut: Röhricht. The name is also the plural form of reeds or rushes (like those found in a fen).
Kung Fucius -- The Aggressive Philosophy
Top

Well done! A previously unknown Pickelhaube maker discovered! You can actually see the umlaut over the o. It just looks like an ink smudge untill you know what it is, then it's obvious. Funny how something can be quite invisible untill one knows what to look for and then it becomes clear as day. Thanks Joe for posting the photo, and that's one now for your superb photo list of maker's marks.
Top

Great reference article Joe; many thanks for compiling!

My Saxon M1915 EM Inf. Pickelhaube has the following maker's mark which doesn't seem in your list:
Müller & Sarung Dresden

And while we're at it, is 'Cöln' = the city of Cologne, as the latter is usually spelled with a 'K' (Köln)?
Cheers!
Ronny
Top

Thanks Ron! I added it. With my usual brain freeze I'm confused by your city name statement. But then again I am often confused.


Another frustrating English language anomaly when dealing with Imperial Germany is that the language was not standard. The myth that one could just look things up in the dictionary takes some background. There were a slew of dictionaries and official languages that followed state or dialectic lines. There were dictionaries of the different dialects called Mundart such as the Wörterbuch der Elsässischen Mundarten. In 1876, Prussia tried to bring the dialects together, but the various states rejected the attempt.
In 1879, Bavaria published its own grammar guide, followed by Austria and Prussia one year later. Using the Bavarian and Prussian rules, Konrad Duden published a more widely accepted dictionary. Its use spread slowly and only Württemberg accepted it.4 The General German Language Association was founded in 1885 well after the foundation of the empire.5 In June 1901, in order to make sure uniform grammar and spelling were adopted in all German-speaking states (including Austria and Switzerland), a second conference was called to further spelling and grammar reform (Beratungen über die Einheitlichkeit der deutschen Rechtschreibung). Better known as II Orthographische Konferenz, this received a much wider reception and in 1901 a lot of "th’s" were abolished and replaced by a simple "t"(e.g., Thal or Fürstenthum). In several words and names, “k” replaced "c" except in Cassel and Cöln. Many other letter "c’s" in words with a French background were turned into "z’s. "Ie"" replaced the "i" that had a long pronunciation. The standards were generally accepted and turned into official regulations by December 1902. The Kaiser initially opposed the change and official documents were to be written in both forms until 1911. The changes were not adopted by many publishers because they did not wish to change their typeset. In theory, the Study Group for German Word Research (Arbeitsgemeinschaft für deutsche Wortforschung) did not fix this until 1939. That is why you may find different spellings in texts written between 1871 and 1918. Additionally, there was an unbelievably convoluted way for alphabetization that is often encountered where certain letter groups such as "sch" were treated as a single letter. Many other anomalies also exist.

And I thought Chinese or Arabic with their different dialects were complicated!
Thanks for the info. Joe.
Cheers!
Ronny
Top

A very interesting Mark has been added to our list.

This comes from a helmet listed on eBay and has all sorts of interesting points. It is an M 15 Prussian or. It is marked on both sides of the visor. As you look at it upside down the left-hand side is marked with a BA IX standing for Bekleidungsamt Army Corps IX. There is also a new maker's Mark shown below.

So far nothing special and on the right-hand side there is a marketing to JR 76 that has been “crossed out”.

This is consistent with Army Corps IX.
As this mark is different than the prewar model it appears as though this helmet was originally issued to JR 76 from BA IX. So far so good.

On the right-hand side there is another circular makers Mark, the blackout JR 76, and a known markings for Bekleidungs Instandsetzung Army Corps XII .

At the same time there is a 2nd circular makers Mark stamp one just outside of the other with one of them having a serrated edge.

Inside the circular marking you can clearly see the word Inst. which stands for Instandsetzung, or repair facility as seen in other markings such as:

Not only were helmets issued back into the system by the repair facilities with a BIA mark there are other marks used on release that cause confusion. The most common of these is the letter F. The letter is found on many BIA marks as well as BKA marks. it is found both in the capital letter F and the smaller letter f. This was an inspection mark that followed a shorthand wartime garniture system. Because many of the wartime helmets were released from the BIA with repairs this marking is often confused with "repaired". However, they were also inspected and released from the BKA. The letter in small or capital spelling means "felddienstbrauchbar" or field/war serviceable. The lower-level garniture inspection resulted in code "G"meaning "garnisonsdienstbrauchbar" or garrison / home serviceable only. This marking was often used for obsolete helmet types. This mark was far from universally used.

it is not clear which circular marks the marking Inst. came from however, one can surmise that one marking is for the maker and the other is for the repair facility.

Taking this a bit further it seems as though the helmet started its life in IX Army Corps, a Prussian unit. It was picked up and repaired by XII army corps. That is Saxon.

As a result a question is posed. Why do we still have the Prussian Wappen? Many possibilities here but it is certainly unique and interesting.
VR/Joe
www.pickelhauben.net
The British philosopher and historian R.G. Colligwood said, "it is not
the facts that are interesting in history, but the questions and their
answers - and these can never be fixed.
Top

Okay boys and girls this is the newest one. I cannot read anything except Drong. can anybody else? Does anybody know about this maker? This was on a doctored Prussian artillery.

Joe, the town could be Celle, in Saxony.
Top

This is a real mystery in that the helmet has no spike or ball but it is equipped with what appears to be an officer's parade Bush red.
VR/Joe
www.pickelhauben.net
The British philosopher and historian R.G. Colligwood said, "it is not
the facts that are interesting in history, but the questions and their
answers - and these can never be fixed.
Top

THIS IS THE STAMPED NAME INSIDE THE THE SWEATBAND ON MY BAVARIAN GENERALS. I CANNOT SEEM TO LOCATE THE MAN. ANY IDEAS 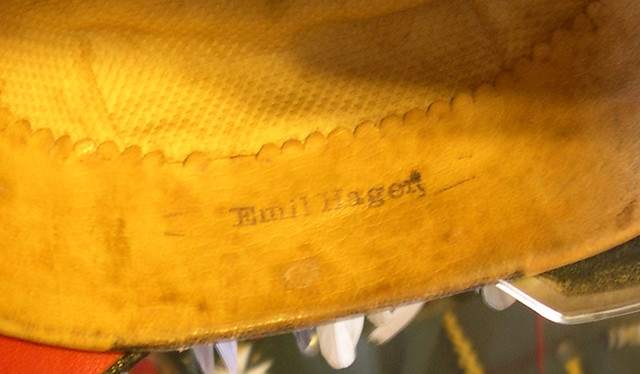 Bavarian General by Joe Robinson, on Flickr
VR/Joe
www.pickelhauben.net
The British philosopher and historian R.G. Colligwood said, "it is not
the facts that are interesting in history, but the questions and their
answers - and these can never be fixed.
Top

Unfortunately Joe I can't be of any help. A maker's mark? I am interest though in the weave of the cloth liner seen in the pic. Any possibility of getting another pic showing the entire cloth liner? I am preparing pics for a post on officer liners and this looks interesting as it is different that usual.
Remember, Pillage first THEN Burn ...
Top
Post Reply
25 posts • Page 1 of 1