I recently won this Tschapka on eBay. It is not really perfect, but I liked it enough to buy it.
These are the pictures from the seller, I will be posting my own pictures when it arrives at my home. 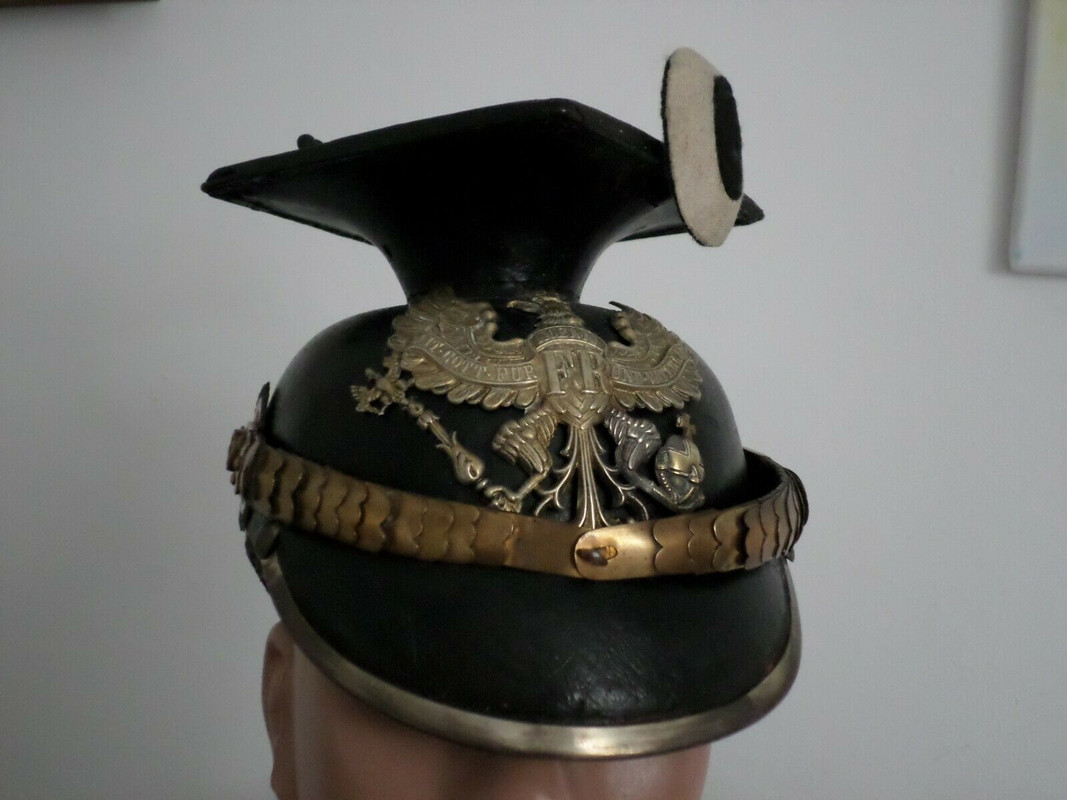 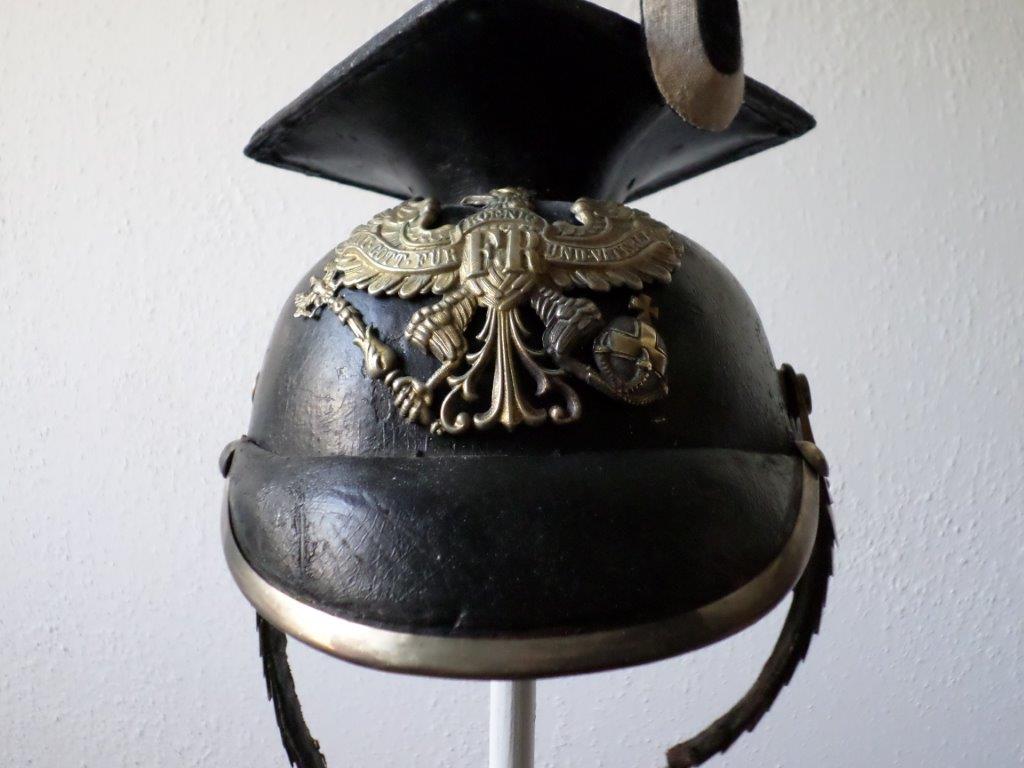 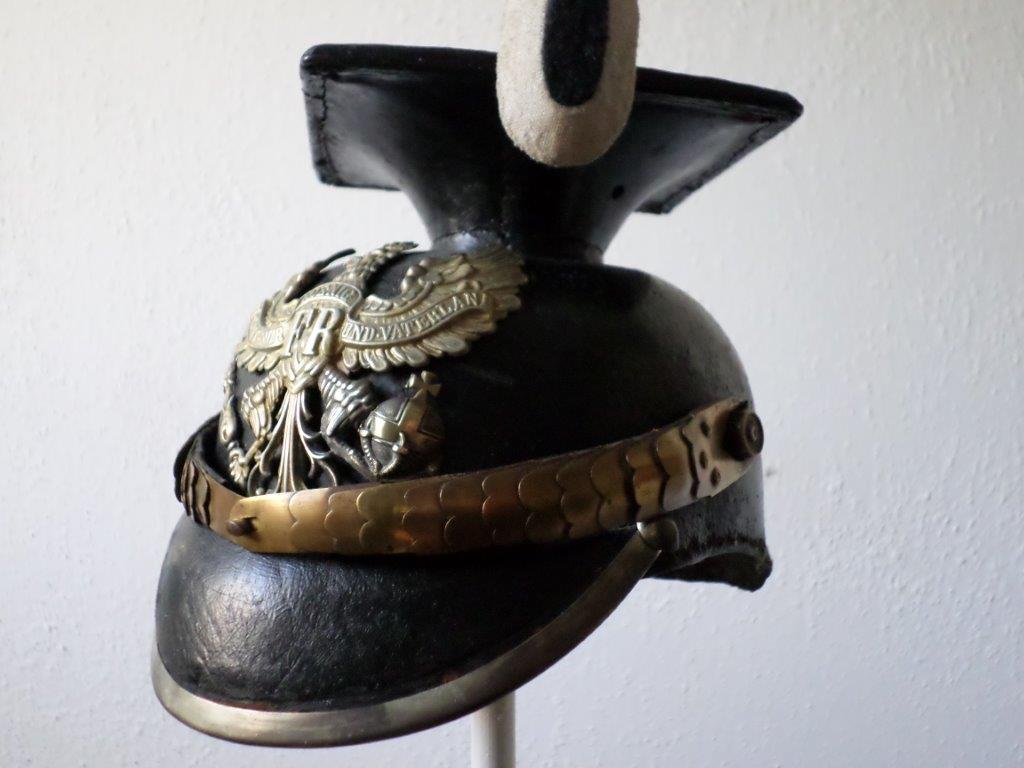 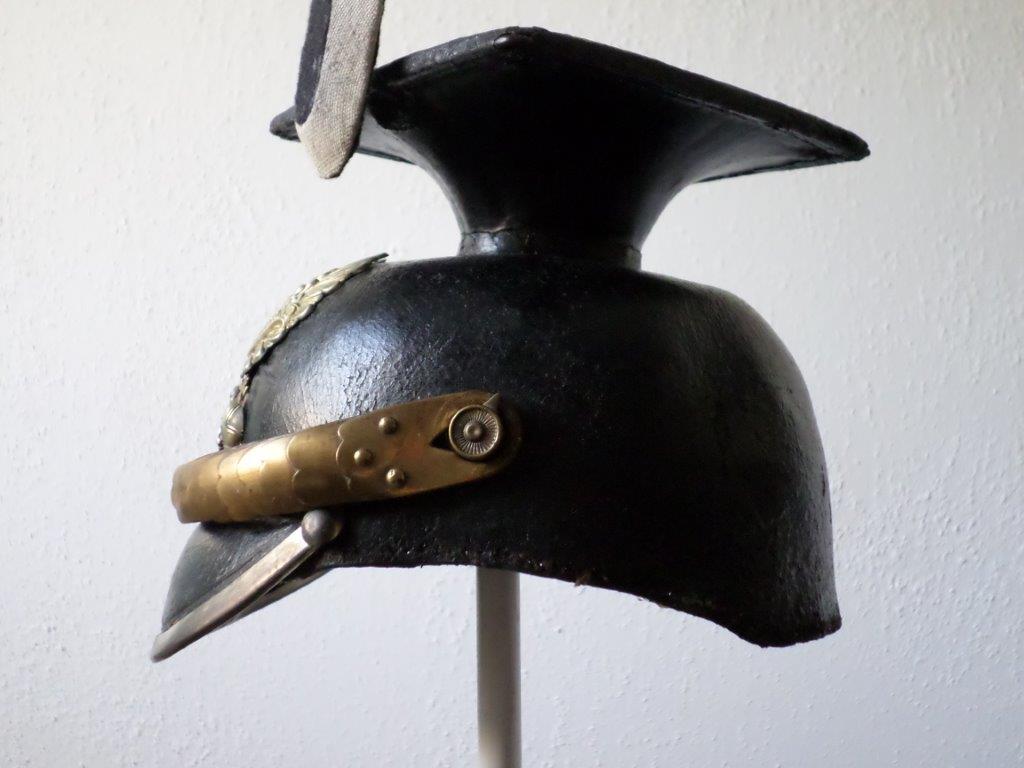 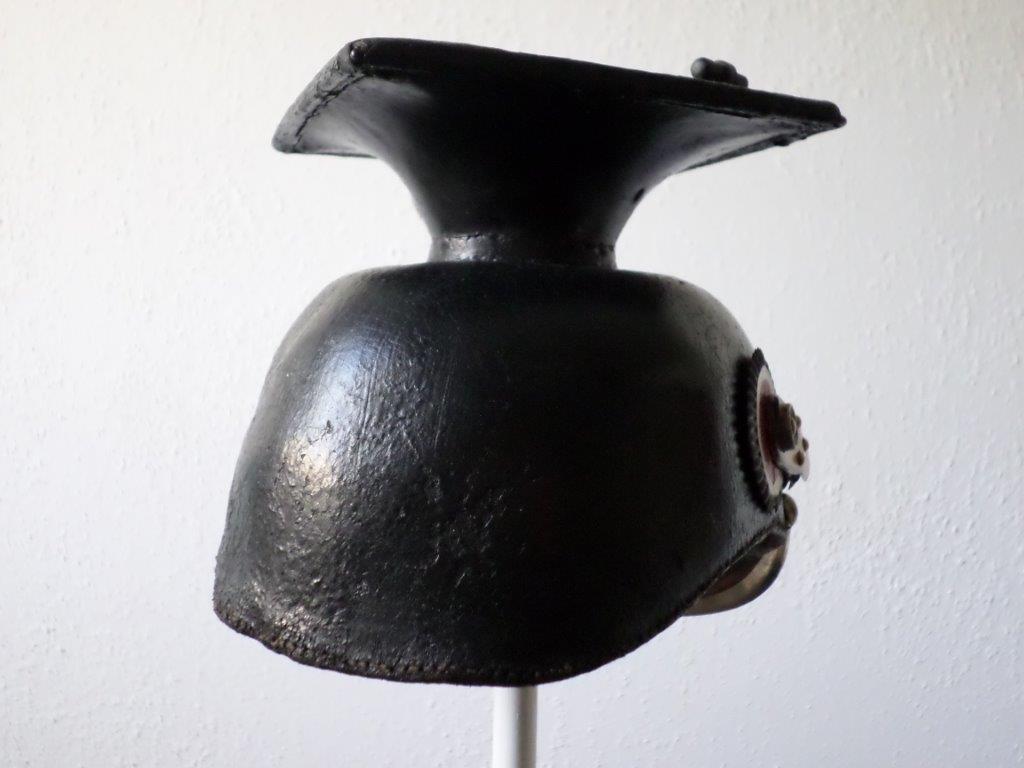 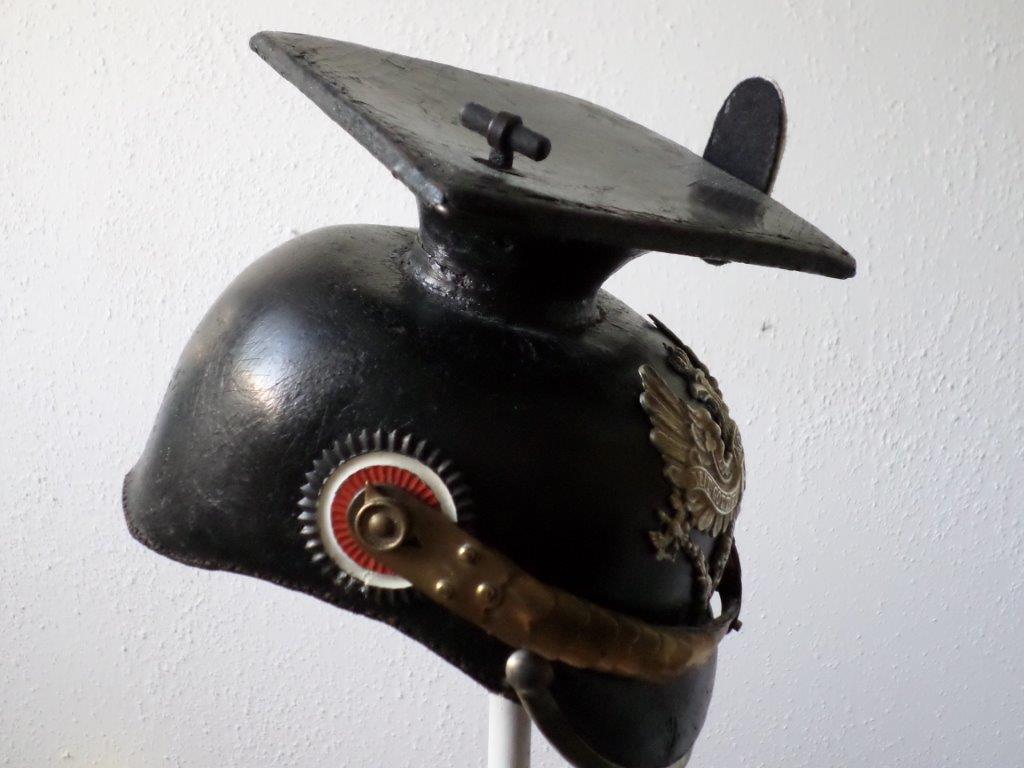 It is missing its liner, so I will be searching for a liner that fits. I know the wappen had a repair to the right leg with the orb.
Any comments are, as usual welcome guy's.

Have a nice sunday,

Nice find and good luck with the liner.
Hope you will make a restoration-post when you are replacing the Liner

Yes Sandy, if I find a liner for it, I will be posting a thread on it in the Restoration section here on the Forum.
I used to have a parts helmet that would have been perfect for it, as it had a square tongued liner.
But unfortunately I sold it.. but I will find a liner for it. Might take some time, but time is on my hand.
Anyway, yesterday I bought a nice Prussian officer helmet on Kleinanzeigen.de. It was so cheap I couldn't let it go.
Guess the seller needed the money, he immediately agreed with my bid. Only the silk cloth is missing on that one.
Will be posting pics of this one too when it arrives at my house.

The tschapka liner is unique, to my knowledge,there is no other helmet liner like it. I have made replacement haube liners but would not even know where to begin on a tschapka. Anyway Coert keep us in the loop and good luck.
Remember, Pillage first THEN Burn ...
Top

I will echo what Brian wrote, and wish you the best of luck to find a liner. This might be an insurmountable challenge though. Where do you find a spare Tschapka liner?? I think I have never seen one for sale. If you ever find one, it must also be of the right size, and as Brian reminded us, adding it to your Tschapka won't be an easy job. Another issue with swapping liners on Tschapkas is that this is where these are usually regimentally marked, in the absence of a rear visor.
Since you kindly asked for comments, Coert, buying a helmet with no liner is a no no, as far as I am concerned, let alone a Tschapka. This is only my opinion though. On the other hand, I understand the temptation.
Best wishes. Perhaps will you find a Tschapka wreck from which you can recover a decent liner...
https://www.ebay.fr/itm/184297274115
Top

Thanks Brian and Bruno,

I know it will be hard, and even maybe impossible to find a liner for it. But I just couldn't resist this Tschapka at that price.
Like you said Bruno, temptation got the better of me. But I am happy with it, even if I don't find a liner for it.
Thanks for your comments gentlemen! I appreciate it a lot.

I am looking at finding a scrapper Tschapka with a decent liner now, but I know it will be difficult.

I can't imagine stitching a replacement liner in. The front visor must be an issue to be dealt with.
fezzes frigidus es
Top

I can handle the front visor restitch, no problem as I have done three successfully but the liner is very complex. The rear part of the liner actually has cane srtips stitched in along the fold line to give a more rounded look. Then you have the curve in the shell which accommodates the ears...the liner is also cut and stitched around this curve....really, a total nightmare to try and reproduce. Then you have the squared tongues with metal eyelets. The pickelhaube and hussar busby (yes more complex construction) looking down at them are flat circles but the tschapka is a totally different beast. One other point that I must make , is that the originals were made with new materials..fresh and flexible, no shrinkage, or 100 year abuse problems. Vintage car restoration has similar problems but I can't cut out rusted sections with a torch or weld new pieces on.

It is what it is.
Remember, Pillage first THEN Burn ...
Top

Well, I can restore older cars, and cut out pieces and put new pieces of metal in. But those day's are over, am more back to my old love now, restoring old motorcycles. But the Tschapka arrived today!

I know now it will be, at least for me, virtually impossible to find another liner for it. But I like it anyway. It looks good in my collection, and I didn't pay much for it so it is okay. I just rearranged my small collection, so here is a picture of it. 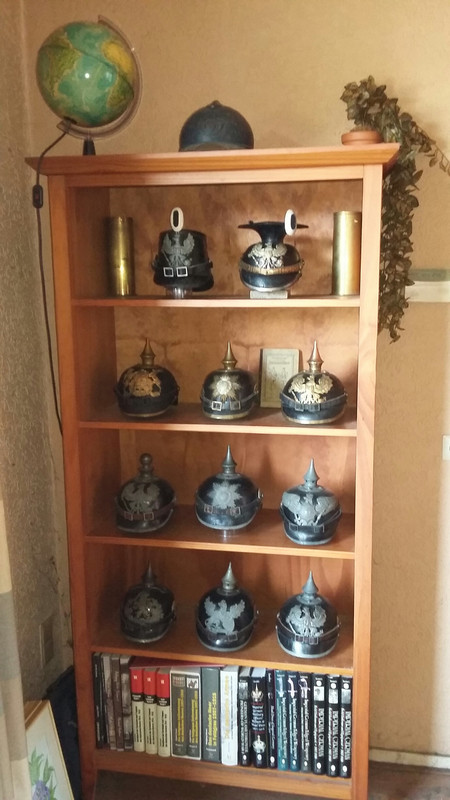 Thanks for the replies guy's, I guess my simple reasoning fitting a square tongued liner from a normal haube will not fit, so it will remain as is.

Have a nice evening all!

PS...I did a repair on a Garde tschapka of Alan's which included a restitch of the liner, check that out in the restoration section if so inclined. Years ago, I also replaced a cardboard top on an OR's M95 tschapka mortar board bought from Manions. I used thin leather then lacquered it, the piece was pre war with brass fittings. I would expect that many of those tops are cardboard, stitched onto the leather stem then lacquered. I guess, after 40 years of working on these headdress, I have a bit of experience.

To be honest, I never thought about it and continue to do so, it is just a problem that I have to figure out someway of solving so that it looks better. Coert...I just got caught up in discussing Tschapka liners, no problem sir, enjoy your helmet, it looks great!

No problem Brian, I will check it out in the restoration section here!
The Tschapka does look great, only thing with it, is that it has no liner. Front visor is really nice and thight, no problems with the stitching there.
I expected that, because of the missing liner.
And my simple thinking I could fix it easily, but that won't do.

I really approve your, and everybody elses meaning and remarks on it, as we all learn from it!
This is what makes this forum great.


Have a nice evening!

b.loree wrote: ↑
Tue Jun 23, 2020 3:41 pm
PS...I did a repair on a Garde tschapka of Alan's which included a restitch of the liner, check that out in the restoration section if so inclined. Years ago, I also replaced a cardboard top on a tschapka mortar board bought from Manions. I used thin leather then lacquered it, the piece was pre war with brass fittings. I would expect that many of those tops are cardboard, stitched onto the leather stem then lacquered. Coert...I just got caught up in discussing Tschapka liners, no problem sir, enjoy your helmet, it looks great!

In passing, you may not have seen one like this before. A rare variation that belongs to a high-quality NCO Tschapka. In fact, a change of Feldzeichen, cockade and Rabatte would readily turn it into an officer Tschapka. The color of this liner is lovely. Looks like Hermes millinery...

Great, thank you so much Bruno!! You have provided a beautiful example of what I was trying to describe. So...you can see how the stitching ends at the visor trim, you can also see how rounded the liner edge is, which is created by the cane strip inserts mentioned previously. The liner at the front of the tschapka where the front visor is, cut (if memory serves) in "V" shapes, like we see here in the mortarboard tschapka stem. I mean, how else are you going to secure that mortarboard stem to the shell?? Obviously, the tschapka, is quite a ridiculous and therefore an expensive design but prior to WW1 the Ulans had a big reputation which the Brit Tommies quickly dispelled with their rapid fire in the initial months of the war.
Going back to, the Middle Ages and before, best way to deal with any mounted Ulan units, is to kill or wound the horses, cripple them and the rider falls to the mercy (NOT) of the infantry. At Waterloo...form squares, show the bayonet!! A very simple Historical solution to a mounted attack but one which requires discipline and training to execute. I find it very ironic when I see modern police forming "shield walls" to force protestors off the street. I used to teach the "Phalanx" to my students using yard sticks and chairs, I would line them up in opposing ranks and command them to charge each other. The chairs were their shields and naturally they pushed with their shields and thrust with the yard sticks, not to hurt anyone BUT they got the PHALANX experience! I also told them....the ancients always put the strongest man on the right of the line.

Nope. Its the same as an issued Tschapka. Unique. You could install the silk part but not the calfskin sweatband which of course, has to be cut to match the shell.
Remember, Pillage first THEN Burn ...
Top

At this point in time, I should confess, that I have probably 20 years ago, made a repro of an OR's tschapka liner. It was not a great copy, as I had no original example to follow, I just had the tschapka in front of me that needed a liner. I used paper to make a template of the liner from the shell itself and get that side curve. I combined this template with one that I had made from an infantry liner in order to get the "fingers". Now, I could probably do a bit better but still a monumental task. No thanks!
Remember, Pillage first THEN Burn ...
Top

I think that Tschapka displays really well even without the liner. All the exterior looks to be in pretty good shape. You'd never even know the liner was missing unless you picked it up and looked inside. If you got a good deal on it that's a nice find! Any manufacturer or unit stamps?
Top

Thanks Bob, it display's really well.
Everything on the Tschapka is in good order, the helmet itself has no issues. So no deformations of the piece itself.
Only the liner is missing, but like you said, you would only know if you picked it up and looked inside.
I guess I had a good deal on it, paid 700 euro for it. Weitze has one for sale, an officer one, missing its liner and
a deformed skull for 2200 euro..
https://www.weitze.net/militaria/23/Pre ... 55523.html
I know officer ones are more expensive, but looking at that one I think I did okay with my OR Tschapka.
There are no marks to be found on it unfortunately. But I didn't use an UV light to check yet.