This is an interesting looking helmet. It is a summer version Hungarian Police helmet. It is oilcloth over wire. Worn from WW1 to the beginning of WW2. So ugly it's cool.

Very nice example, the second one that I've ever seen. The summer version introduced for only NCOs and policemen.

This type introduced in 1909, the shape modelled after Miklós Zrínyi's helmet. 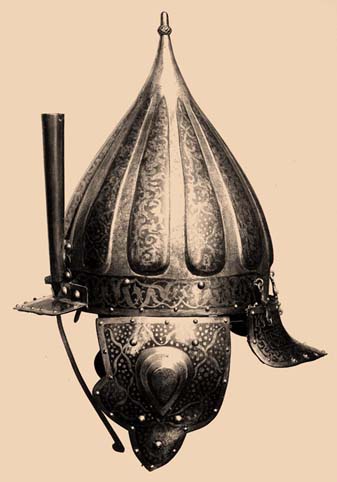 The so-called Zrínyi-helmet used until 1946 by the Royal Hungarian Police.
Top

First one I ever saw!
I like it!
Thanks for sharing!
|<
Always looking for Belgian Congo stuff!
http://virtueel-museum-antwerpen.webnode.be/" onclick="window.open(this.href);return false;
cheers
|<ris

Khukri: Nice photo! Some on the picture are mounted policemen (with plume and Sam Browne belt)

In a word: WOW. That is an incredible find.

I've seen the metal versions at the military museum in Budapest, but I've never seen the summer version. That is simply fantastic. Congrats.
Top

Peter_Suciu wrote:In a word: WOW. That is an incredible find.

I've seen the metal versions at the military museum in Budapest, but I've never seen the summer version. That is simply fantastic. Congrats.

The "metal" versions were made from leather, with aluminium fittings.
Top

I have 3 of these helmets and there are differences in them depending on the manufacturer . There are two different heights and 2 of the 3 are leather with aluminum and the third perhaps is the oil cloth which I had assumed was just aged leather. I'd like to find an original tunic to go with one and I also have been many times to the museum in Budapest and was again there about a month ago for some reference work. The Budapest military museum rotates inventory frequently so generally each time there I have seen more of their collection . The all metal versions are very rare and I would love to own one but they also command a very high price when found.
I'm not overly computer literate so not quite sure yet how to post pictures. Is there a function where I can load an image from my laptop files? I see something at the top that is labeled img but it appears you need a url instead of loading an image direct, perhaps someone can advise me in that regard since I'm not exactly a spring chicken nor child of the computer age.
Top