Before and after pictures of restoration projects

This piece we have seen before, as it belongs to Al aka Czech Legion, he has posted photos previously. I received this when I met both he and his wife at the SOS. These are the usual "before pictures". There are two problems.....the rear of the shell has sunken in and is very dry and hard, second as can be seen the sweat band has pulled off the shell and needs to be restitched. The reshaping of the shell must come first and as we speak it is being rehydrated to get some flexibility back into that part of the shell. The photos:

The mortar board top on this is actually lacquered covered cardboard for lightness. Obviously, it has curved down over time.

Note the curved chin scale bosses which fit the convex cavalry chin scales. All cavalry and other units such as Train and Feld Artillery wore convex scales. Sometimes, the curve on these scales can be very subtle causing the collector to wonder if they are really convex. The easy way to tell is to look at the bosses...if they are flat then the scales are not cavalry, if curved then they are proper for a mounted unit.

The feldzeichen slot which shows some missing finish and the typical white metal "hook" for the fang schnurr.

Wappen removed and we see a nice ghost imprint which tells us that it has been on the helmet for 100 years.

After 100 years of shrinkage, this situation, is typical of officer tschapkas in my experience. For whatever reason, the sides collapse in at the back of the shell. The OR's version, is a heavier gauge of leather and we do not see this problem as much, because the leather is thicker. i am going to try and solve this by hydrating the helmet for several days and then blocking it back into shape. The other problem obviously, is that the sweat band needs to be restitched all round the rim of the shell. Note how it was cut in order to stitch it in place.
Remember, Pillage first THEN Burn ...
Top

Brian do you have a trick to straighten the mortarboard?
Bruno
Top

No Bruno, unfortunately, I do not. I can not think of anything that would not compromise it and make things worse.
Remember, Pillage first THEN Burn ...
Top

This is going to be a great project !!
Top

The hydration process begins, wet newspaper is placed inside the shell. The helmet will be put in a sealed large plastic bag.

Ok, the helmet was hydrated for 3 days using a method previously described. This shell was very dry and caved in, there was no way of trying to block it back into shape without hydration. This is what it looks like right now. It is on a plastic covered (plastic bag) head form, back into correct shape and drying. I am going to leave this on the head form for a week just to make certain that the piece holds it's correct shape. A plastic grocery bag is used to prevent the sweat band from sticking to the styrofoam head. This is a lesson learned from experience, never let the leather sit on the head and dry, it will stick and possibly tear the leather when you try to remove it. The next step will be to restitch the sweatband.

Part of the cause for the collapse of this shell can be seen here.....missing finish on the back edge of the shell. We are going to add new finish to fill this in.

The fittings had to be taken off before hydration.

Looking forward to seeing how the hardware pretties up!

Thanks for going the extra mile on this helmet in re-shaping it, I appreciate it! It's looking a whole lot better already!

By member glenn66:
Looking forward to seeing how the hardware pretties up!

The eagle seems to have a lot of mercury fire gilt left on it, and it would probably clean up simply with some warm soapy water.

Yes Al, I did not intend cleaning any fittings as you had not requested that in our conversation at the SOS. So no metal cleaning.

Some pictures of the sweatband restitch. I have never done one of these before and the tschapka liner is truly unique. The front part of the sweatband is stitched like a typical officer but the rest of it starting with the split brads holding the trim on is totally different. The pictures:

This picture shows the unusual construction/stitching of the sweat band. The front (visor) portion is tack stitched like the typical officer band but the rest is stitched round the rim. 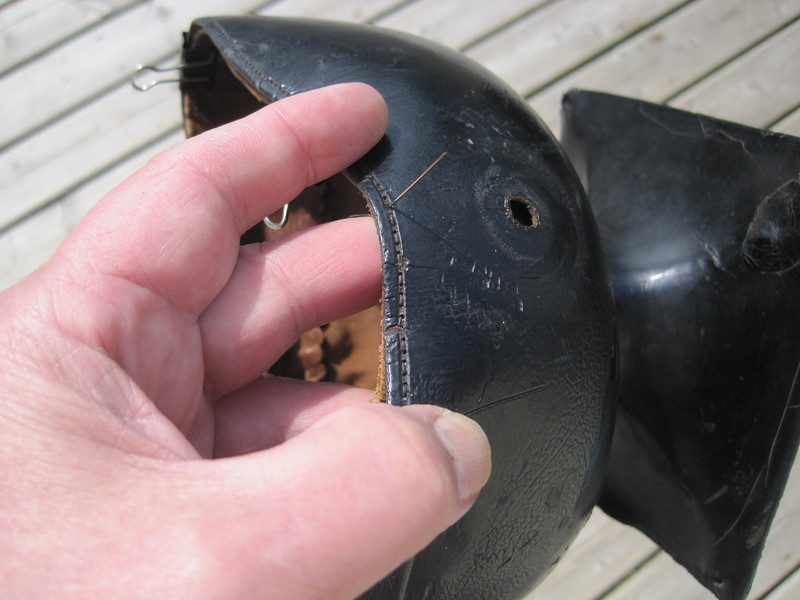 The first stitch pass from the outside of the shell. You can see how the first stitch pass fills in every other hole. Once you reach the other side, you have to stitch back and fill in. The stitch was hard on the rim lacquer and numerous pieces chipped off. This can not be avoided. While I am doing all of this, the shell rim is busy collapsing back into it's original shape. This piece must be kept on a head form from now on as we are fighting decades of the shell not being supported. 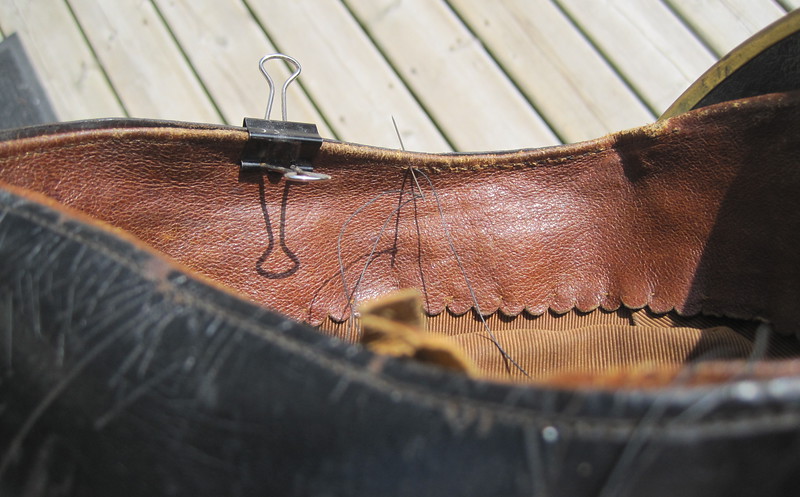 An inside shot showing the use of a paper clamp to keep the sweat band in position.

All stitching has now been replaced but you can see the loss of finish along the rim. The 100 year old lacquer is very brittle, I will try and fill this in with some polish.
Remember, Pillage first THEN Burn ...
Top

Wow Brian, that's awesome work. It looks like it would have originally. I can't tell that it was ever unstitched! I am in awe!

I can't imagine how tedious it was to do this fine stitching!

You or the owner can put the top in traction to bring up the droopy corners .

Use a 3/4 in block of wood aprx the size of the mortar board and use C clamps on the corners . Tighting them all of the way may crack the shellac so only tighten a little at a time covering about 2-4 weeks should do it.

Place a thick piece of leather under the clamp's post so it does not give the leather a dimple under the board.
Top

Like expected, you're doing a superb job again restoring this beauty. I think you need alot of patience restitching the sweatband.
Every time i see the finished result of one of your restorations, i wanne try to restore a helmet myself, but i guess i will start with an easy one first.

Yes best to start on an enlisted helmet first, perhaps an M15 which needs work. You don't want to start on a piece that is worth a lot of money. The officer stitching is much finer and harder to do. This sweatband stitching was even finer. I had never done this sort of repair before but it turned out well and was actually easier than an officer pickelhaube sweatband, with those, a curved needle must be used.
Remember, Pillage first THEN Burn ...
Top

A picture showing where we are at in filling in a small area of missing finish on this rare tschapka...almost done!

A light sanding with steel wool will follow then another thin application of finish.
Remember, Pillage first THEN Burn ...
Top

A final picture of the completed refinishing part of this project:

Despite my efforts, the sides of the shell continue to want to draw inward. The only solution is to display the tschapka on some sort of form which will prevent this. The piece has been returned safely to it's owner.
Remember, Pillage first THEN Burn ...
Top

Brian ;
Outstanding ! O F S
I love seeing your work
Thanks for the photos

Thanks Steve, much appreciated, I love to see your pictures of new shoulder boards. I am working on a Garde Eisenbahn Officer helme at this time, so more to come. i will make a new post on this very soon.
Remember, Pillage first THEN Burn ...
Top

Great work, how did the mortar board turn out?
fezzes frigidus es
Top

I did not touch the mortar board other than give it a bit of polish to make everything blend in. My main task at the request of the owner was to restitch the sweat band.
Remember, Pillage first THEN Burn ...
Top