List any items that are not Pickelhauben such as swords, steel helmets, badges etc you have for sale here.
Post Reply
22 posts • Page 1 of 1

In a moment of mental weakness, I recently acquired a German manufactured export lance. It is both maker marked and Argentine government marked. At present I have rigged it up as an Ersatz coat rack in my garage. I thought it was quite inconspicuous until yesterday when Sally said "George, you need to get rid of some of those old coats in the garage...Oh and I see you're hiding another damned lance out there."

Well, here's how it happened. A guy called me from Williamsburg to offer a genuine German cavalry lance to me. I asked him all the correct questions trying to determine that it wasn't a damned Argie. I even asked him, it's not Argentine is it? He of course replied "No".

We agreed that I would pay $325 for it and he would find some way to get it to the gunshow in Richmond. Well I got to my table at the show late and there stood my fellow with a ten foot length of PVC pipe in hand. It was all taped up at both ends. Apparently everyone in the place had been staring at this guy in wonderment.

I quickly took the pipe/lance from him and laid it behind my table. I paid my man the $325 as he said he wanted to shop around the show. After getting my tables uncovered I attacked the taped ends of the pipe and pulled the lance out. Damned freakin' ARGENTINE!

Well the hapless fellow never returned and when I called him, he said he was sorry and would refund the money if I could wait two weeks, and of course return the ten foot lance to him. Well I wasn't going to drive all the way across Virginia with this damned thing sticking out of the truck for $325.

So here's the deal, I am going to be at the MAX Show in Charlotte at the end of September. If one of you fine fellows wants this thing for a reasonable price, I will bring it to Charlotte...hell I'll deliver it to anyone within a hundred mile radius of New Market Virginia. As to price, I will accept a loss but I WILL NOT ship it.
Geo
Top

I got one of the Arg. examples as well, looks good on the wall! Wish it was a total German exmaple, but I will keep dreaming.

Anyway, UPS delivered mine no problem, it was shipped in the PVC tubing.

Bought two British lances from an old dealer friend - without thinking about how to get them home (no car). No problem, he said, I'll drive you. We drove through the city with me leaning out of the passenger window holding both lances taped together, up against the side of the car. Stopped at traffic lights and another car drew up alongside. Paid no attention to it, then saw it was a Police cruiser.
Policeman lowers window, sticks his head out and looks down the whole length of the lances, realising what it is he is looking at. I give him a grin: he rolls his eyes, shakes his head and just drives off as the lights change. Had them for ten years before noticing the woodwork at the butt end was stamped to the 17th Lancers. Sometimes the Gods smile down.

I bought an Argentine Lance at the Michigan Antique Arms Show last year. I'll have it on my table at SOS if anyone is interested. It is a lovely piece but I have nowhere to properly display it unfortunately.
Top

Back in the 1980s a local museum got tipped off to a crate containing four imperial German lances, two with brass fittings and two with wartime steel fittings. They had been shipped back to the States some time in the 1920's and had never been out of the wooden crate. The museum didn't need four lances, so I traded for one of them. I don't remember how I got it home, but I still have it. It's marked to 1st Ulan regiment and dated 1910. I also have the Lanzriemen and a Prussian NCO pennant.

There is a picture in the book. Perhaps Francis will post it. It shows all of these German steel tube lances bent while the bamboo ones from Belgium were fine.
VR/Joe
www.pickelhauben.net
The British philosopher and historian R.G. Colligwood said, "it is not
the facts that are interesting in history, but the questions and their
answers - and these can never be fixed.
Top

Here it is ! There is a story on this picture. The post on the left with the small figure of a saint on top...the post was struck by four rounds. No big deal; but to the people that were tasked to do this gruesome job it was important....the fact that it was just the post that got struck and not the figure....
I will go and see the Stroobants family (owners of the museum) soon and I will ask them.

From March 1915 on, the Germans-with locals and some soldiers that were in the fight on August 12th 1914-the battlefield was combed for fieldgraves. It was then that Major Victor Baron Digeon von Monteton's widow (Regimental Commander of the Dragoner Regt Nr 18 - Parchim) was in Halen to find the corpse of her husband. She managed to identify him and to take the body to Germany. Last year I found out that his name is on the bronze plates that are around the Kameradengrab (massgrave) at Langemark (Flanders) Soldatenfriedhof. Probably the original list of the unidentified Officers and men was used for the bronze plates names. 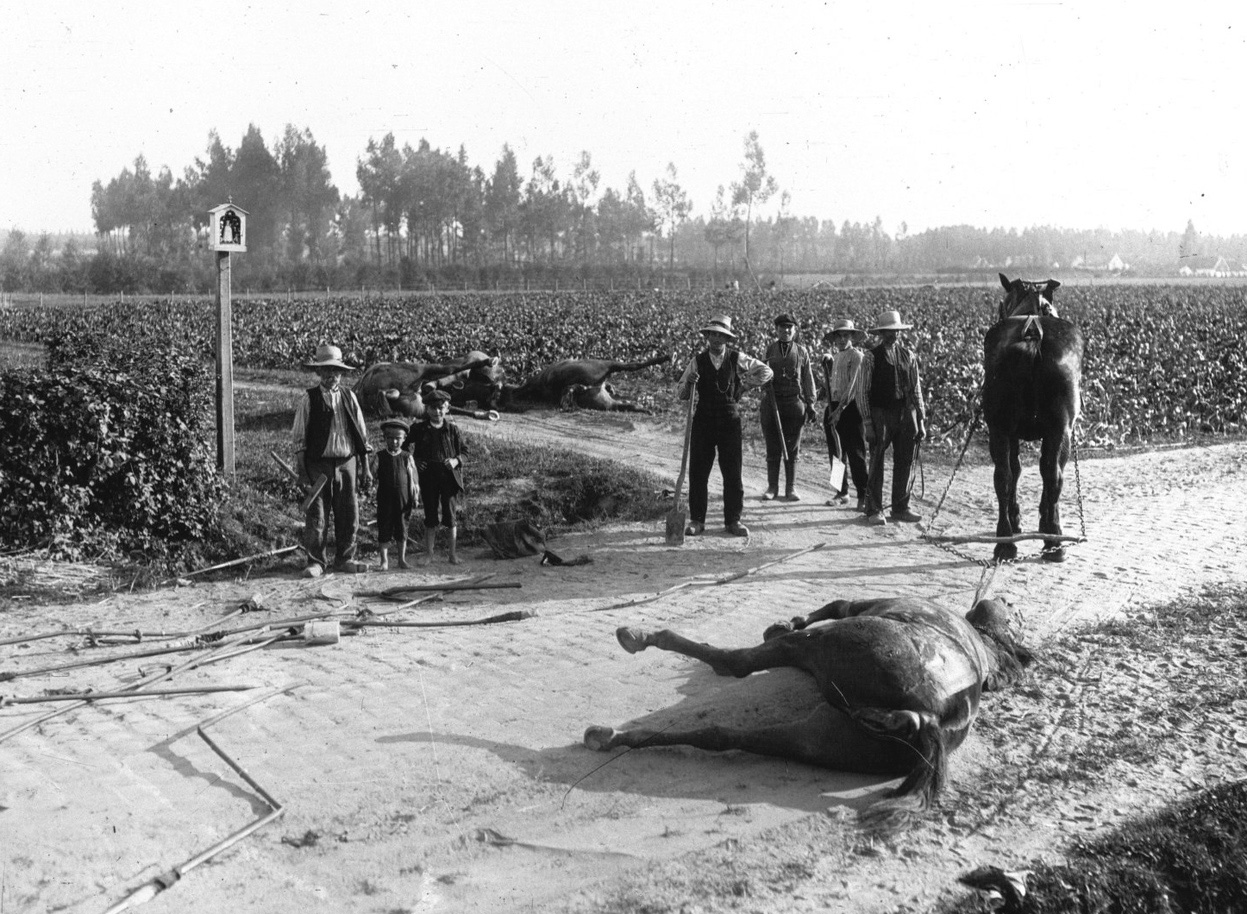 Some german lances for sale...

German-made for Argentina. Nice lances. I owed one but it was impossible to display. I had it on a stand I made just off the floor. It was really cool but way too long to hang on most of my walls.

Sarco Inc is down to the last ones. Shipping is expensive however.
Top

At the 2016 MAX Show I bought two more lances - these are German marked and I don't see the Argentine markings. How do you tell if these are true German and not export lances?

The price was right given that each lance was cut. I bought them from a friend who picked up the two over the summer in Tennessee. He said they were WWI bring-backs, but as they say you buy the item not the story. I'm looking to see how I could get a dowel to allow the two halves to go back together.

I'll have these at SOS if I don't sell them before hand. I'll snap some photos later this week too.
Top

I have two argies one imperial German and one British in my store
Dave
Dave
www.armyoutfitters.ca
Top

Not seeing the lances on there? Am I just not looking right spot, tried search as well?

We have so much stock that only about 10% of what we have has made it to ebay or the website honestly. I have not posted the lances on the website as there just isnt enough time in the day even with employees working just as hard as I am.
Having said that Tony S. asked me for pics and I then kicked myself as it is not a german but another argie one. Crap. Oh well
Dave
Dave
www.armyoutfitters.ca
Top

Oh well. It was worth a shot.Thanks Dave.

Everytime I follow a lead, always its another Argentine. I have been after an issued M1893 Imperial German Lance for 30+ years... I don't think I'm ever going to find a German one. Time to give up.

I don't know what the lances are made of ?
If cut into 2 sections .
I have a couple of I G regiment flags
where the poles had to cut into 2 sections
for transportation .
They are wooden poles .
I drilled out the center of both ends and a screw
with threads at both ends . That put them back together
Then when I mounted them on the wall I had wire supports
on each side of the cut .
They have hung nicely ever since .
If the lances are metal
then you need a super drill bit .

I hope that I am not misreading your question, but here goes anyway. The imperial German cavalry lance was basically composed of a steel point, a brass section in the middle, a tapered steel butt end and two pieces of steel tubing on either side of the brass section (this section also served as the handle). The steel tubing was 26mm outside diameter with 1mm wall thickness. I guess this thin walled tubing accounted for all the bent lances that appear in period after-battle photos. Both ends of the handle, the tip and the butt all fit into the two tubing sections.

I have some break down photos but I cannot post them. I can send them by e:mail if someone wants to post them
Neil
Top
Post Reply
22 posts • Page 1 of 1

Return to “Miscellaneous Items For Sale”