helpfully, this assertion is disproved by the line Fußartillerie Pickelhaube!! Even more helpful, one could just make out the signature on the back and the notation "R. 13"

Meet Leutnant Ernst Wendland of Hohenzollernsches Fußartillerie-Regiment Nr. 13, then attached to the Artillery and Engineer School in Berlin. Leutnant Wendland rose to the rank of a charakterisierter Generalleutnant in the Reichsheer and died in 1935.

Well Glenn I am on that one-- thank you. Here is a teaser for you. And yes I do not know if his teeth are a photographic anomaly or if they are really as strange as his mustache 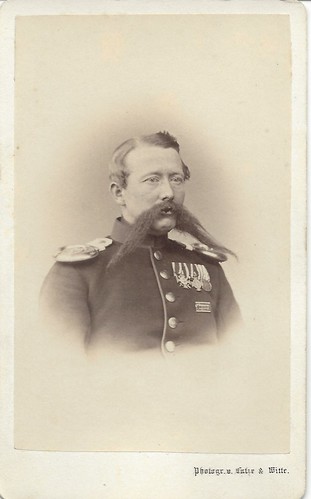 ps3219 by joerookery, on Flickr
VR/Joe
www.pickelhauben.net
The British philosopher and historian R.G. Colligwood said, "it is not
the facts that are interesting in history, but the questions and their
answers - and these can never be fixed.
Top

Notwithstanding those teeth, this guy may be a bit tricky.

I think an infantry reserve or Landwehr lieutenant from the 1870s with a Crown Order 4 with Swords and a Landwehr long service decoration 2nd Class. I am trying to make out the name on the rear of the card.....perhaps Schulenburg??

well having trawled through the 1869 Prussian Army List for a Reserve/Landwehr type with a KO4X and LD2 plue a name ending in S..lenburg, I have only come across one suspect - a Premier-Lieutenant Schulenburg of I./4. Ostpreußisches Landwehr-Regiment Nr. 5 in Graudenz. Moving back to 1866 he won the KO4X whilst on the books of I./Magdeburgisches Landwehr-Regiment Nr. 26 but serving in the field with Infanterie-Regiment Nr. 26 and if I am not mistaken, he has 26 on his epaulettes.

Thank you so much! I certainly could not read the name. It definitely is a six in the second position on the epaulet but I cannot make out the first digit. Thanks again.
VR/Joe
www.pickelhauben.net
The British philosopher and historian R.G. Colligwood said, "it is not
the facts that are interesting in history, but the questions and their
answers - and these can never be fixed.
Top

How about this for a wonderful example of a Prussian general officers' Pickelhaube?

This unidentified Prussian Generalmajor's portrait appeared on ebay recently. He was easily identifield by his unique combination of non Prussian awards on his medal bar:

He last appears in the 1912 Prussian army list as the commander of the 29. Kavallerie-Brigade but then still only with a Red Eagle 3rd Class. His award of the Red Eagle 2nd Class (now worn at the throat in top position) was awarded after the publication of the 1912 list (6 May 1912) on 18 Jan 1913.

Generalmajor Konrad Dumrath (1853-1925). He was recalled in WW1 and commanded amongst other formations, 12. Reserve-Division.

Saw this on ebay recently. Notwithstanding some inconsistencies in this officer's dress, the decorations do not immediately point in any conclusive direction to which contingent he belongs. The grouping though is absolutely unique. In the first instance, then, it was important to identify/recognise the uniform. Any takers? I really want to but I did not take my eye off the proofreading ball!
VR/Joe
www.pickelhauben.net
The British philosopher and historian R.G. Colligwood said, "it is not
the facts that are interesting in history, but the questions and their
answers - and these can never be fixed.
Top

Well our subject's name can be revealed in short order. I was wondering if anyone had recognised the conflict between his awards and his uniform?

not that you would know it by his decorations, but this guy is Bavarian. The clues to the contingent are the rather distinctive badges on the front of his pouch belt. However, these decorative pieces were abolished after the death of King Ludwig II in 1886. The photograph is clearly later than 1897 as the subject is wearing the 25 year oakleaf on his Iron Cross and a Centenary medal. The photograph in fact dates at around 1901. So what have we? An aged subaltern or captain who was a veteran of the Franco-German War some thirty years before. Clearly then, he was already retired with the permission to wear his uniform (and an obsolete one at that). Karl Freiherr v. Eichthal won his EK2 as an Unterlieutenant der Landwehr serving with the 1. Uhlanen-Regiment (note the quaint spelling). Transfering to the 1. Cuirassier-Regiment after the war, he retired as a Premier-Lieutenant on 29 January 1879 with permssion to wear his regimental uniform. A Kammerherr (Chamberlain) to the Bavarian Monarch and an Imperial Legation Secretary, he was promoted to charakterisierter Rittmeister der Reserve außer Dienst on 4 March 1887.

Not a single Bavarian decoration to his name but well decorated from other states, he wears at the throat a commander's cross of the Princely House Order of Hohenzollern and a commander's cross of the Luxembourg Order of the Oak Crown. On his bar: Prussian EK2, Baden Zähringer Lion Knight's Cross 1st Class, Centenary Medal, Italian Order of Saint Maurice and Lazarus Knight's Cross and a San Marino Knight's Order Officer's Cross. His 1871 campaign medal is obscured by his pouch belt.

Here is an interesting portrait and frankly, the only way I was able to identify him was by the medal bar; his uniform being unknown to me. Even the angle of the shot of the helmet was problematical but the bar is clearly Bavarian. Any thoughts? I just have to say that the depth of knowledge on display in this thread is nothing short of astounding. It simply amazes me that these men can be identified - something to behold!
Top

Major of the Munich City Police (Schutzmannschaft) Ludwig Schroll. This is a wartime shot as shown by the Bavarian King Ludwig Cross in first place on his medal bar (instituted in 1916). The uniform was a bit of a challenge. It is described in Ingo Lohken's "Polizei-Uniformen der Süddeutschen Staaten 1872-1932" has having embroidery on both the collar and cuffs which are clearly absent here, perhaps a wartime development? In any case, it more or less fits the description minus the embroidery. Still when I could not find him in the Bavarian Military Handbook, the Police still seemed the most likely solution.

Herr Schroll was listed in the 1914 Bavarian Military Handbook as an Oberleutnant a.D. with just a 1905 Jubilee Medal and the Mecklenburg Griffin Order Knight's Cross with Crown. I was on safer ground when fortunately the 1914 Bavarian Court and State Handbook had caught up on his recently awarded Saxon Albrechts Orden and the Austro-Hungarian Order of the Iron Crown 3rd Class as a Polizei-Hauptmann in München. He was awarded the Bulgarian Civil Merit Order during the War.

So there you have a Münchener Schutzmannschaft officer's Pickelhaube.

This has been made a sticky

in my opinion this is Glenn's masterpiece
VR/Joe
www.pickelhauben.net
The British philosopher and historian R.G. Colligwood said, "it is not
the facts that are interesting in history, but the questions and their
answers - and these can never be fixed.
Top

Most interesting....I do believe, that Joe, has become "Watson" to our resident photographic/medals Sleuth....Sherlock G. von Holmes! Excellent sleuthing on all fronts gentlemen, truly fascinating examples of deduction and logic! If there were murder involved, we would certainly have the makings for another Hollywood epic. I love it...it's brilliant!!!
Remember, Pillage first THEN Burn ...
Top
Post Reply
115 posts