Here's a rare U.S. Experimental #5 Helmet in spectacular condtion. It's absolutely one of the nicest one's I've ever seen! It even has mud splotches on the almost perfect paint of the exterior. The painted exterior is almost perfect, and the liner shows little wear/use. I used to have one of these and sold it back in '98. Wish I had my old one back, even though it wasn't quite as nice as this one.

These helmets were found to look too much like the German M-16 Helmet (obviously). They are also very similar to the Swiss Helmet of the same time period. I believe Bashford Dean's book says there were ? 1,200 or 2,000 produced? if I remember.

This helmet so closely resembles the Swiss model that it makes me wonder how many of these are being sold at bargain prices because nobody realizes what they are. What are the exact differences? From first glance, it seems that the front brim is bent sharper i.e. more pointy. Another difference might be the placement of the chin strap mounts inside the helmet.
Top

About 2000 of these were produced, and this is one of the experimental helmets that actually saw some use in the trenches. That one looks to be in spectacular condition. I wonder how many survived, as I think I know of at least 20 in private collections.

I hear that argument about the "Swiss" appearance and I really don't buy it. These helmets side by side look only slightly similiar to me (I have both). In his book Helmets and Body Armor in Modern Warfare Dean wrote, “It (the Swiss Model 1918) resembles our helmet so closely that it could be readily mistaken for it – yet there is no doubt whatever that the two models were designed independently on either side of the ocean. American mode No. 5, it will be observed, has its side produced farther forward as a protection to the orbit.”

The other difference is the lack of vents in the Model 5. The shapes really are different.

I've heard from one collector that he found TWO (2) Liberty Bell helmets sold by an Army/Navy store as British "Turtle Shell" MkIII helmets! I wonder if that story is true, but that seems possible.

My two cents... if you didn't know this helmet was an American Model 5 you'd probably think it was German honestly. I see a lot of Swiss helmets sold as "German."
Top

You are right about the vent holes, not all Swiss helmets had them but most did. Considering that the development of helmets had just started and had yielded very different solutions so far, I do think that the shapes are very similar.

Does anybody know which time exactly Charles L'Eplattenier started to develop the military helmets which evolved to the Swiss standard design? 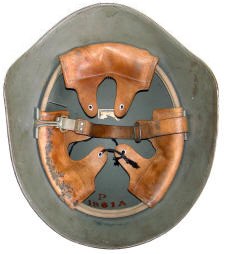 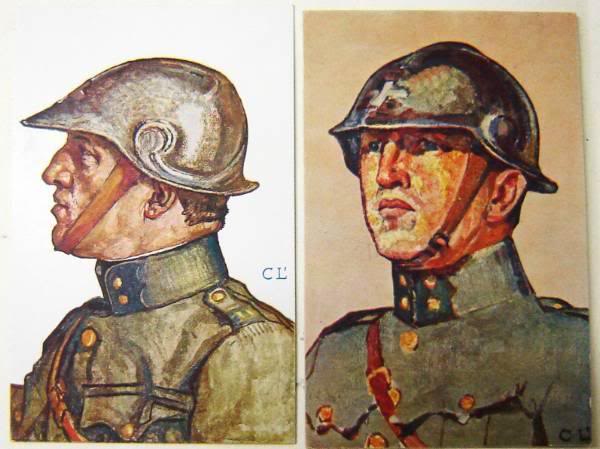 When you compare the Model 5 with the Swiss M-18 side by side I don't see it:

Similar, but it is a stretch to say the Swiss copied the Model 5. It is like suggesting the Soviets copied the Italian M33. Yeah, similar but not really that close.
Top

Actually I'm not suggesting that the Swiss copied the US helmet. Rather it would be interesting to find out whether the US companies involved had a look at various examples that were developed at that time and based their model on them.

The Swiss M18 was as an adoption of a historic helmet design (in the same way as the Brodie helmet). L'Eplatteniers helmet was based on 16th century models, and this design is also somewhat similar to some Swiss fire helmets. It was trialled before the war and actually issued in 1917, but was found too expensive and complicated. It was simplified by other makers for mass production (L'Eplattenier received 30,000 Swiss francs for his work) and the Swiss kept the basic form of the shell until after WWII.

Not so the US design which bears no resemblance to anything previously used in that country.

Is there any further information available about who designed the Model 5 and what the process was?
Top

this is one of the experimental helmets that actually saw some use in the trenches.

Peter, about 30 years ago I purchased one of these helmets with a 78th Division emblem painted on each side of the helmet, in addition, it came with a WWI US Gasmask with the same unit emblem on the front. The man I purchased the set from found them at a yardsale in upstate New York. Foolishly I sold the set, as I didn't collect US at the time

Robert wrote:Is there any further information available about who designed the Model 5 and what the process was?

Chris Armold in his book Steel Pots suggests the Model 2 was based on the 15th century Greek helmets. This information comes from Bashford Dean's book I believe.

It is noted that the Model 5, and later the Model 5A, were based on the German Model 1916 helmet.

Dr. Bashford Dean was actually the curator of the Metropolitian Museum of Art Arms and Armor Gallery. He was "drafted" into service by the US Military when the US entered World War II and he and his staff researched various helmets, and devised the early American experimental helmets.

It is noted in Dean's book and elsewhere that a variety of helmets were sent over by the British and French to be examined. Ford made a number of the experimental helmets.
Last edited by Peter_Suciu on Thu Sep 09, 2010 4:27 pm, edited 1 time in total.
Top

this is one of the experimental helmets that actually saw some use in the trenches.

Peter, about 30 years ago I purchased one of these helmets with a 78th Division emblem painted on each side of the helmet, in addition, it came with a WWI US Gasmask with the same unit emblem on the front. The man I purchased the set from found them at a yardsale in upstate New York. Foolishly I sold the set, as I didn't collect US at the time

That would have been something. The Model 5, unlike the other experimental helmets actually saw use in Europe. I tend to believe most of these were painted with the divisional emblem to ensure that the American troops knew these were Yanks.
Top

I had to agree with Robert that this looked similar to the Swiss, until put side by side and I can understand a neophyte misidentifying one.

As far as the histories I've read, the German M16 had a profound affect on US helmet designers and it wasn't until the M1 was developed with an 'American shape' that the 'Brodie' was let go. However, I think we have to look to the M16's and 18's as the source of influence.