This is a Model 1871 Garde Fußartillerie helmet recently found in Berlin: 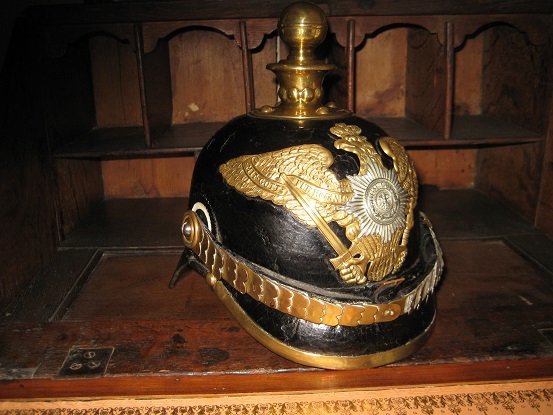 Since this helmet is prior to 1897 it only has one Kokarde: 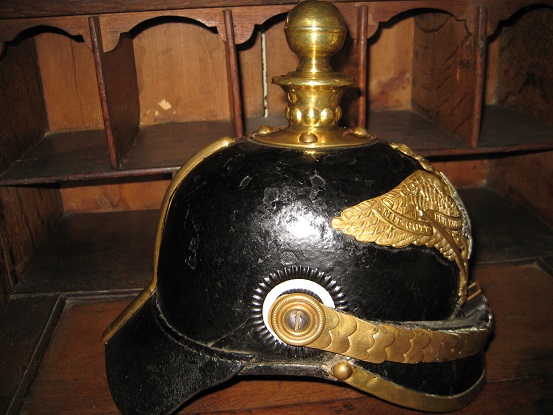 This helmet is extremely heavy and incorporates very thick shellac; thicker than most that I have seen. This helmet may have been serviced by the BKA at some point in its service life; regardless the shellac is very old: 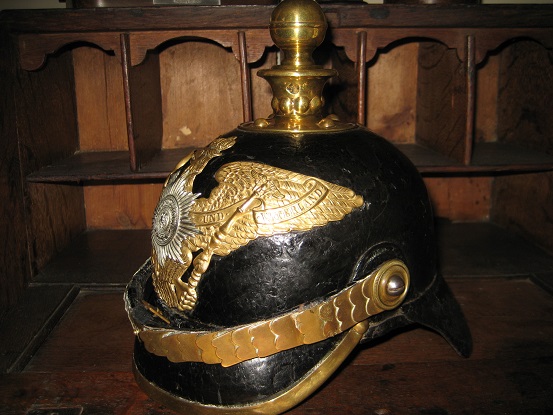 The rear spine is ventless, and the neck guard shows some of the deterioration of the shellac: 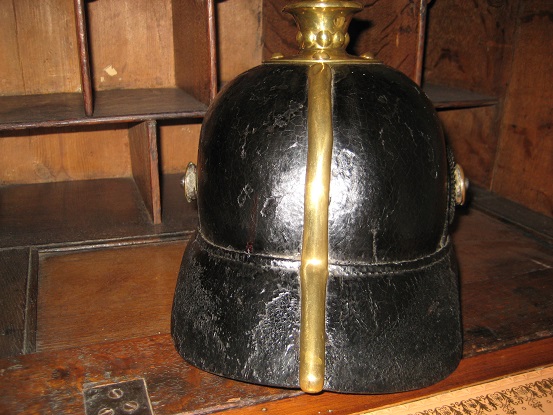 The liner is complete and intact: 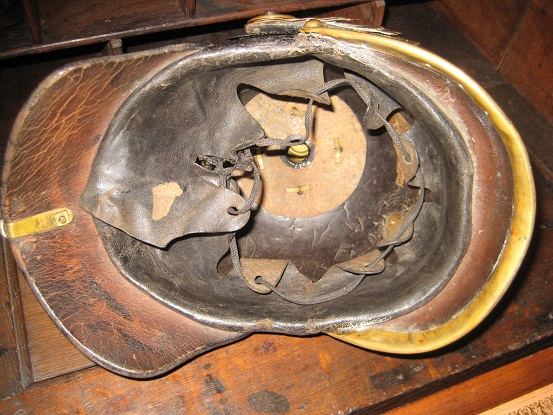 The Wappen is stamped out of heavy gauge brass and the Garde Star is nickel-silver. The Garde Star is attached with bent pins. Unfortunately, the star is missing it’s lower point. The ghost behind this Wappen is unmistakable and indicates that no other Wappen has ever been used on this helmet: 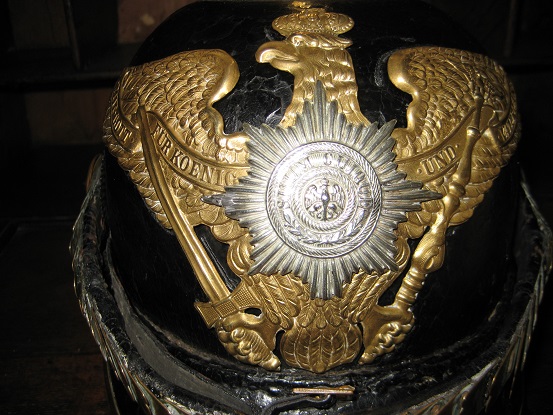 There is a remnant of a paper label name tag on the inside of the helmet shell. There are no additional holes behind the Wappen, and it is held on with screw posts: 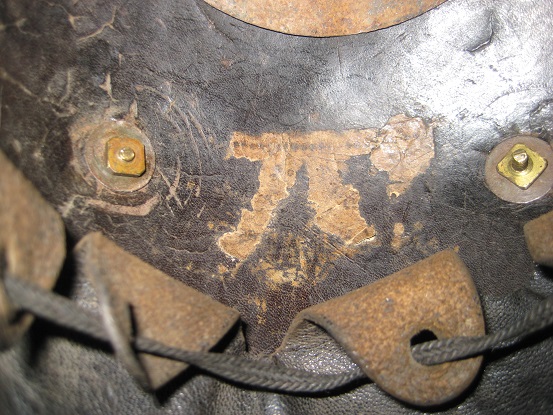 The helmet is marked on the rear visor; however, even when wet the markings are indistinguishable: 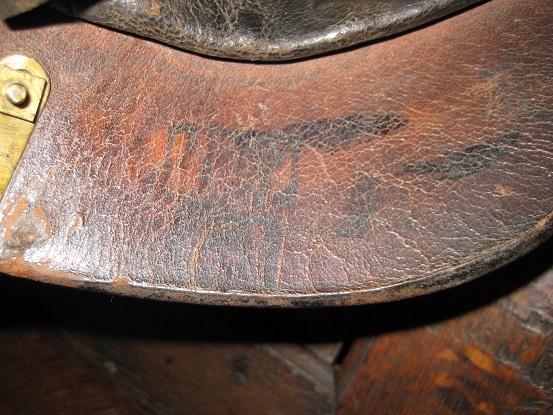 The Kokarde is stamped steel (magnetic) and measures 51 mm. The chinscales are held on with screw posts: 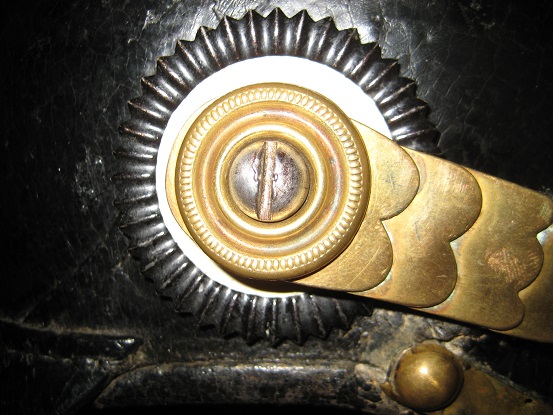 The front visor trim is staked in three places, presumably to hold the visor trim in place. I have only seen this type of trim staking on Model 1871 helmets: 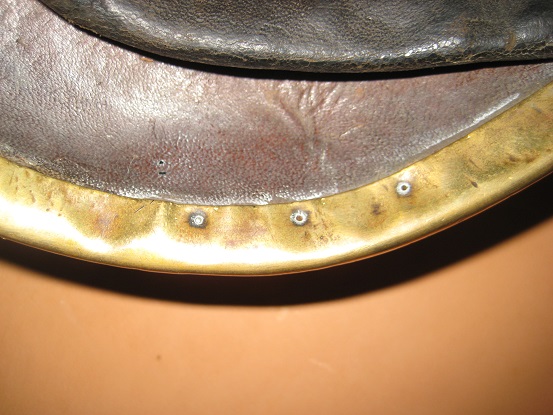 The following information was provided me by a fellow forum member, Reservist1:

The German Artillery from 1871 to 1914, uniforms and equipment by Ulrich Herr and Jens Nguyen indicate on page 406 that the only foot artillery unit authorized a parade plume prior to 1913 was the Guard Foot Artillery.

Formations und Uniformierungsgeschichte des Prussisches Heeres 1808 bis 1914 by Paul Pietsch, in volume2, page 199 indicates that the date that the Trichter was awarded to the Guard Foot Artillery was 1874. 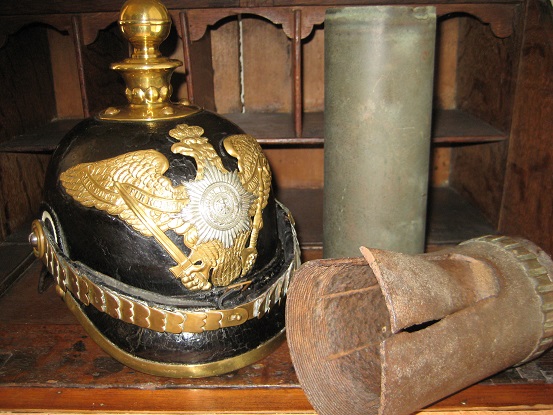 This helmet could also have been worn by personnel of the Artillerieprüfungskommission (APK).

Prussian King Friedrich Wilhelm III on March 17, 1809 initiated the formation of a special commission for artillery matters. On February 29, 1816, the commission became the artillery examination/testing commission with the issue of an Allerhöchste Kabinets Order "Highest Cabinet Order" (AKO).
The artillery inspection commission consisted of personnel from the army and navy artillery. It was responsible for the development, testing and procurement of artillery material, and included evaluating foreign developments. The APK included an experimental department, an experimental company, a depot administration and a replacement battalion. The Artillerieprüfungskommission (APK) was authorized to wear a Garde Kugelhelm with flat chinscales.

With the end of the First World War in 1918, the APK was dissolved. 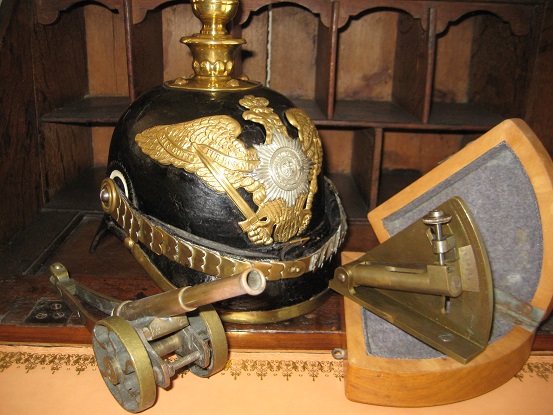 I would like to gratefully acknowledge the assistance, research, and information provided by Reservist1 concerning the dates that authorized a parade plume for the Garde Foot Artillery Regiment (1). Everything on this helmet looked correct with the exception of a fixed Kugel, which made me skeptical. Without the information Reservist1 provided I doubt that I would have purchased this helmet.

Great older helmet!
Here is an exemple of visor "staking" on a more recent model. Whether it is a period modification or not I don't know though.

It looks like yours was done with wire brads.
On mine the visor trim looks like it was simply hit with a punch and the brass "dimpled" into the leather to hold it in place.
Very interesting the lengths they went to, to keep these in service.
Beautiful Saxon helmet!

If you look in the restoration section at James's 1871 that I worked on recently, it had the same punch marks in the back of the visor trim.
Remember, Pillage first THEN Burn ...
Top

Just had a read through this posting.

Very informative and useful article. Thanks for taking the time to post this.

I appreciate the time and effort this sort of post entails.

I just read through this post for the first time.

A very detailed and informative posting.

Thanks for sharing this.

Thanks for the comments guys. I appreciate it.