Prussian M15 Uhlan Tschapka with cover.
Fiber body helmet with enamel painted steel top.
The cover is fastened by a series of hooks and eyes down on the side and secured to the helmet by two frontal clips and an elasticated rear.

Thanks Ron, one can always count on you for a nice comment.

Just great Ed, the Tschapka... and the picture. I wonder what the tattoo on the horse's hind leg stands for.
Top

Thanks Bruno.
This is from the Ulanen-Regiments Hennigs v. Treffenfeld (Altmärkisches) Nr. 16.
So the brand or tattoo could be I.16, although it looks like an L
Don’t know what the I or L would stand for.
Cheers

The brand is very interesting !

But: a famous Regiment !

Having silenced the French artillery, neutralized the French cavalry, and panicked the French infantry, von Bredow's brigade managed to extricate itself and withdrew to their own lines. Of the 800 horsemen who had started out, only 420 returned.[1] Among the wounded from the 12th Brigade was Lieutenant Herbert von Bismarck, son of the Prussian chancellor Otto von Bismarck
Top

OMG Ed, are you teasing us again with this excellent Tshapka???? Great piece and great history added By Francis!

Okay no mo teasing ,I promise …

Wow what a fantastic Tschapka and cover well done Ed

Have a look at the thightly roled up lance pennant. Served as a "stopper" when entering the target.
Francis
Top

Congratulations on a great tschapka & field cover Ed, they are truly a great set!

Thanks for the great history Francis, I enjoyed learning more about the regiment!

Does anyone know the connection between the 17th Hussars whose busbies bear the name Mars la Tour on their busby banners and the three cavalry regiments that participated in the battle?
Jim
Top

Same day, Same battle, not in the Bredow Brigade; not in that fight: (not in the famous Totenritt "Death Ride")

Thank you Francis. I appreciate the info. It is interesting that only the 17th was recognized with the Honor Banner.
Jim
Top 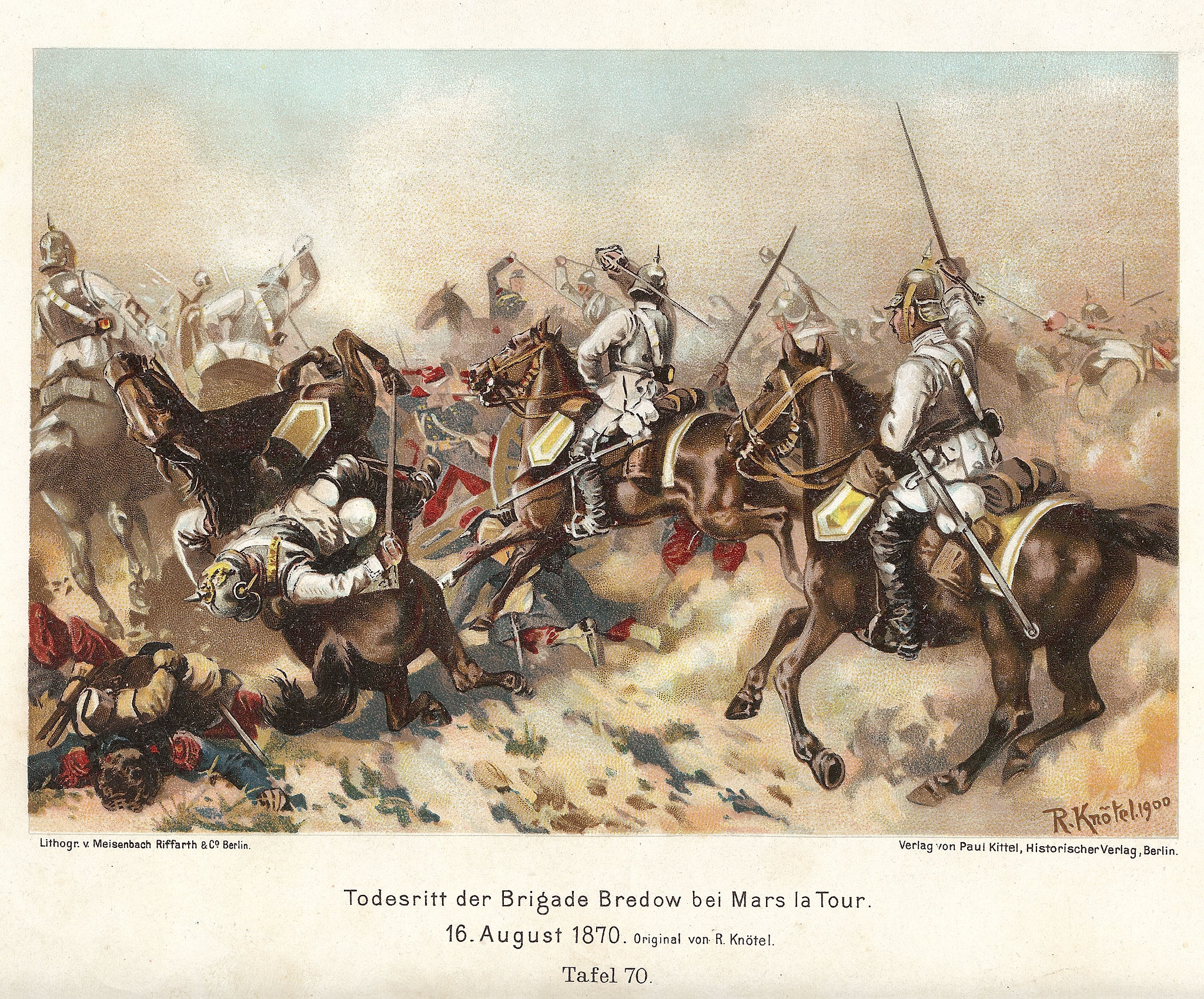 kbredow by Joe Robinson, on Flickr
VR/Joe
www.pickelhauben.net
The British philosopher and historian R.G. Colligwood said, "it is not
the facts that are interesting in history, but the questions and their
answers - and these can never be fixed.
Top

Ed, that's a nice set! Learned a lot from this thread.

jimturinetti wrote:Does anyone know the connection between the 17th Hussars whose busbies bear the name Mars la Tour on their busby banners and the three cavalry regiments that participated in the battle?
Jim

Wasn't that just a political move to do more placating to Brunswick?
VR/Joe
www.pickelhauben.net
The British philosopher and historian R.G. Colligwood said, "it is not
the facts that are interesting in history, but the questions and their
answers - and these can never be fixed.
Top

Granted to be added to the previous battle honours in 1872. Peninsula- Sicilien- Waterloo
Francis
Top

Age of Kings is the best US source and European dealers like Patina Militaria and Sergio Militaria, Weitze Militaria. The Europeans have them for sale all the time but they are not cheap. Welcome to the forum!

A Tschapka has never been and is never cheap!

Could the tattoo on horse have been identifying which stallion was sire?

Prussians were the ones who developed the Trakenhner horse breed, in 1732,
known for their hardiness and their intelligence. They were army remounts, and very sure footed.

Fascinating history behind the breed, almost wiped out during last days of WWII.
Top