Greetings All and Happy New Year, the best of 2013 to each of you in the coming year…

Initially this was going to be another snooze-fest write up by yours truly but this time concerning the 1865-71 Hirschfanger bayonet. However I came to find out that my photographic skills with shiny etched blades are greatly lacking….so we’ll have a slightly condensed version, likely for the best anyway.

Let’s begin with this very clear original CDV image of a kneeling Jaeger circa 1890-1895 which shows his 1871 Hirschfanger bayonet to perfection. He is armed with the new M1888 Commission Rifle and wears the old 1860 pattern Tschako. The Buckeburg photographers address gives us a clue telling us he served with Jaeger Battalion number 7 which was garrisoned in that city. One of the fun features of Imperial era rifles and bayonets in my opinion is the great variety of issue mix that you see in vintage examples of photography. 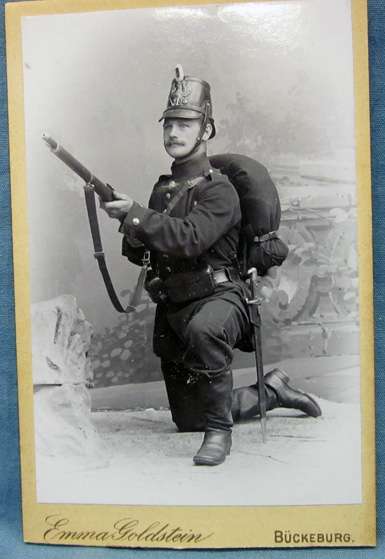 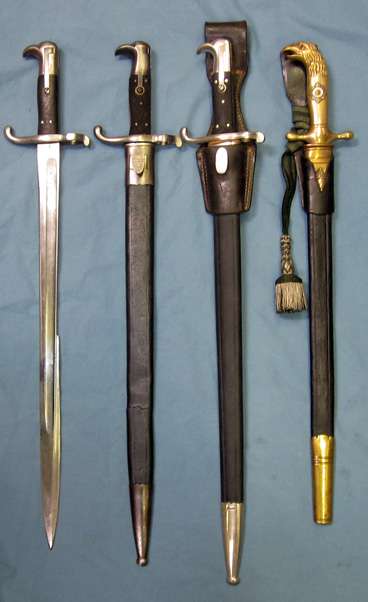 With the adoption of the Dreyse Jaeger Zundnadelbuchse in 1865, a remarkable weapon for the time as it came with double-set triggers. I would think a complicated mechanism during the heat of battle. At any rate, a new Jaeger pattern bayonet was authorized as well, one with a rather uniquely shaped blade tip. According to John Walters in his book “The German Bayonet”, the weapon displayed definite British influences especially in the pressed leather grips and distinctive pommel design.

The bayonet featured a 19.5 inch (49.5cm) blade with a distinctive swell to its tip, a dramatic bird head steel pommel and pressed leather grips secured by two steel rivets on the obverse and three on the reverse. The scabbard was of black leather with a steel throat and tip with an oval shaped frog stud. 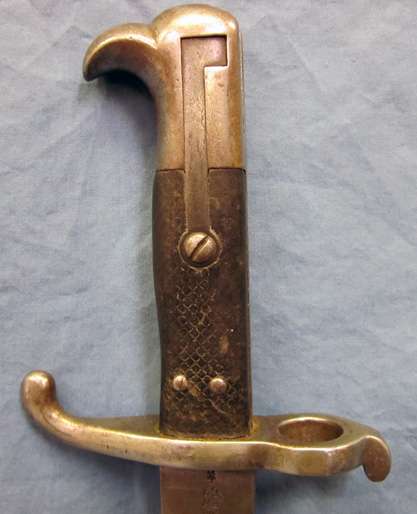 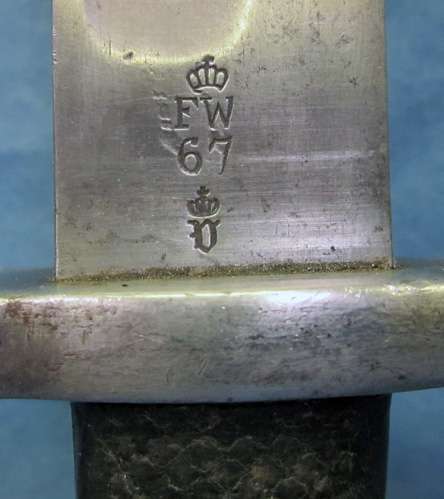 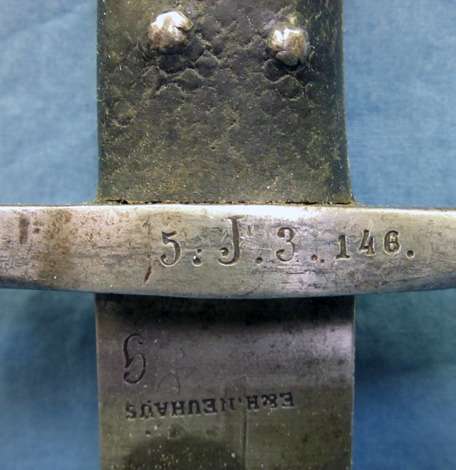 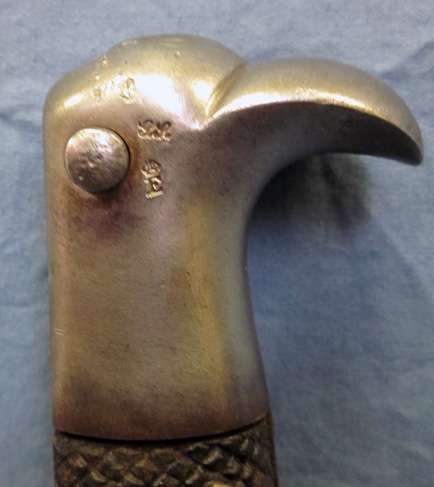 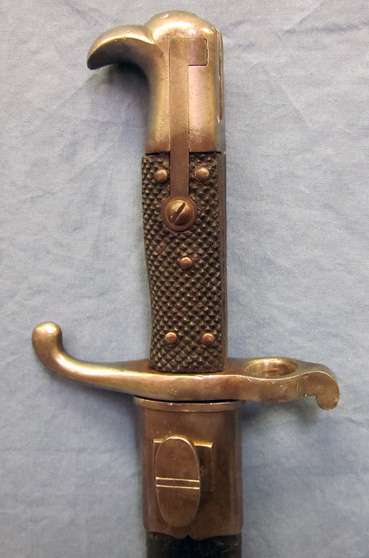 Our example of this first model bayonet was made by the firm of E&H Neuhaus, missing its scabbard but is issue proofed and dated in several places. It is proofed once on the obverse blade ricasso and again on the underside of the guard below the blade edge. In each case matching issue or acceptance stamps can be seen, FW 67 indicating an acceptance year of 1867. On the cross guard are unit markings to the 5th Jaeger Battalion, 3rd Company, 146th weapon. As our example was issued in 1867, it quite likely saw service in the Franco-Prussian War of 1870-71. That possibility pleases me to no end.

At war’s end it was apparent that the needle gun in all of its variations was quite obsolete. So began a general phase-out of that family of weapons with existing stocks of the M1865 Zundnadelbuchse being issued to the Landwehr and Navy. New developments in arms design produced a series of weapons by Mauser, including a specific type for Jaegers, the M1871 Jaegerbuchse. This weapon was of a smaller caliber than its needle gun predecessor, still single shot and used a center fire metallic cartridge with a black powder propellant. Interestingly, the new Jaeger rifle was considerably shorter than its Infantry counterpart, about four inches, but did receive a slightly more elaborate trigger guard, but this time without the set-trigger mechanism. Our example of the 1871 Jaegerbuchse is unit marked on the butt tang to Reserve Pioneer Battalion Nr 10, indicating that Pioneer units also received the shorter model rifle.

In addition to the modified examples, new manufacture bayonets also appeared. They are nearly identical to their predecessors with the exception of five steel rivets on each side of the leather grip. These rivets can be clearly seen in the blow-up of our Jaegers 1871 pattern bayonet and on our example with the leather frog.

The final edged weapon we will briefly discuss is not a bayonet in the literal sense, but rather a Jaeger specific edged weapon and worth including here I believe. It is a Garde Jaeger & Schutzen Hirschfanger as worn by Gefreite & Oberjaegers who had served as Foresters. It features a 17.5 inch (44.5cm) polished steel blade with etched panels on each side. The maker logo of Clemen & Jung is on the reverse ricasso. The hilt is of cast brass with a very detailed eagle head pommel with red glass eyes. On the obverse grip

The hilt is of cast brass with a very detailed eagle head pommel with red glass eyes. On the obverse grip is the Garde Star with white & black enameling. A brass mounted black, leather scabbard with a unique acorn frog stud completes the bayonet. Wrapped around the patent leather frog is the correct pattern NCO troddel for this sidearm.

Our group photograph displays the bayonets in our collection at present along with a backdrop of some other appropriate Jaeger items for your enjoyment. Thanks for your time in reading this.. 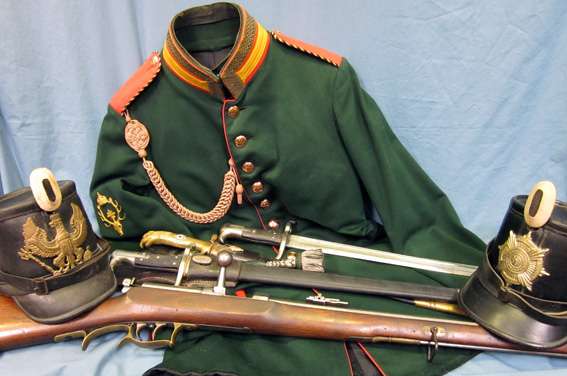 Many thanks guys for taking the time to comment, very much appreciated..

I was really happy to slip the 1865 Jaeger gun into the group photo. I've been on the hunt for one and a friend found one for me at a fair price and I received it just in time for this little write-up .

This same friend is an advanced bayonet collector (also a dealer) and I asked him what I could expect to pay for an unmodified '65 Hirschfanger bayonet, he said he didn't have one himself but said to expect to see one priced in the $2500 range. Gulp, I think I'll be looking for a while..

great post very informative full of details..thank u for sharing this here

A quality cheap weapons for sale adds to the quality of your life.

Thanks Mhalik, I'm glad you found it informative....if anyone has other information to add regarding these cool old bayonets, please do so, there are many members on this forum, yet few respond to most of the posts in the different listings. All of us have an opinion or questions and we're all here to learn. Come on, it's fun.

Stunning collection! With the tunic with Jäger Abzeichen and the rifle, it is hard to tell what's most amazing.
Scientia Vincere Tenebras
Top

Thank you for sharing your great examples of the "Cold Steel".

Larry, I have studied this information thread a number of time. Your M65 Jägerbüchse is an amazing rifle, as well as your blades. What sort of sidearm would a Jäger have carried with a M54 Pikenbüchse a few years before?
Top

Hey Willi, Thanks Pard for the kind words and happy you enjoyed the pics. No idea what they would have carried when issued with the Pikenbuchse, but would presume (spelt with a capital letter P) it would have been one of the numerous varieties of faschinenmesser available at the time. It would be great to find an early dated FM with issue marks to a Jager battalion.

I have a M1854 Pikenbuchse in the collection, one I purchased from Walter K at Louisville about 3 years ago. Sadly the retractable bayonet is a replacement (but really, really well done) and interestingly the buttplate is unit marked to a Navy unit, MD, Matrose(n)? Division.

Yes, I heard you had a M1854. I was talking to Walter at a show a few weeks ago. I am consdiering an example as we speak. It is likely to be a naval issue piece as well, but is does not have a "MD" stamping. It does have what appears to be a rack number in two locations.

Here is an original photo, so perhaps you can ID the sidearm;

, well at least we have proof that they carried something practical in addition to what must have been a very fragile rod bayonet. As far as trying to positively ID the Faschinenmesser he is wearing it would just be a guess on my part. I'll take a stab though (sorry for the pun) and say it is the M1864 pattern. I vote this one because of the prominent beak on the hilt which can be seen in the photo, certainly not proof positive by any means..

Good luck on your acquisition of a Pikenbuchse, I hope it works out for you. One walked in to a local gunshow a few years back. A friend and fellow collector bought it and it was also MD marked on the buttplate. Metal was really pitted in places BUT it had its original bayonet in place.
Top
Post Reply
13 posts • Page 1 of 1